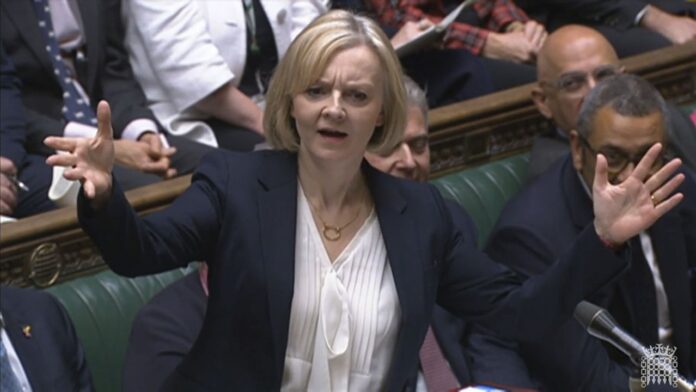 Liz Truss’s brief tenure as Britain’s Prime Minister is over. She met with Chris Brady, the leader of the 1922 Committee, a committee representing all Conservative back-bench MPs and immediately afterwards announced her resignation. She has lasted just 45 days, the shortest tenure of any British Prime Minister. This followed a chaotic set of circumstances in the House of Commons with 40 Tory MPs not taking part in a vote over a fracking bill and it being unclear as to whether this constituted a vote of confidence. There were also reports of Tory MPs being manhandled in order to get them to vote according to the governments’ wishes. With Labour galloping ahead in the polls, by doing nothing other than continuing to attack and their own most militant fighters, the nerve of the Tories has cracked and they have unceremoniously ousted their latest leader.

Liz Truss proved herself to be seriously out-of-touch with the mood of the British people, but also with the accepted economic approach of the capitalist system she espouses. Truss is a neo-liberal but her reckless premature mini-budget underlined an extremist approach to capitalist economics. One of her first announcements was to remove the EU cap on bankers’ bonuses, alongside a raft of tax cuts, almost all benefitting the rich. Alongside this, she had been compelled, against her will, to accept the necessity of a subsidy for energy bills and a vague commitment not to go back to austerity. Along with Kwasi Kwarteng, her then chancellor, she rushed through an un-costed mini-budget, which spooked the markets and led to a run-on Sterling, which further fuelled inflation. Moreover, her bulldozer policies on scrapping environmental regulations and allowing fracking provoked a backlash even inside her own Conservative Party.

There was no need for such a precipitous budget. The fact that she acted so brashly showed a tremendous degree of arrogance. It also showed that she had not consulted widely enough on what the degree of support for such a budget would be. Kwasi Kwarteng was summoned to the USA and returned to the UK with his tail between his legs – later to be fired by Truss. The technocrats had got their way and replaced him with Jeremy Hunt, a neo-liberal from the conventional school, who would do their bidding. As a result, the Tory government is re-directed down a typically EU type path to austerity, with the pledge to subsidise energy bills severely reduced and a clear statement that, “difficult choices (spending cuts) will have to be made.”

At the present time there doesn’t seem to be an obvious successor to Truss. Boris Johnson’s name has been put forward alongside Rishi Sunak’s as the main contenders for the Tory leadership. This is a clear indication of panic in the Tory Party, with the prospect of Johnson’s return as PM beneath contempt and a clear sign of the deep levels of unscrupulousness that the Tories could sink to. Τhere is a clear commitment to find a new leader by Friday of next week. There was a vague statement that ordinary members will be able to have their say in the new appointment, so it seems likely that some form of (un)democratic process will take place. Truss will remain in place until her successor is found.

What the current situation has shown British workers is just how incompetent this government was and on-top of this, the media had lost faith in them. It is also a general manifestation of the process of historic decline of British imperialism, which is ridiculed across the world at the moment.

The mainstream media now seems to favour Labour. Labour, under Sir Keir Starmer, is doing all it can to woo the capitalists. The media is also giving little attention to the Liberal Democrats. It’s made its choice – Labour to replace the Tories if and when there is another election. Labour is therefore seen by the capitalist media as a safe pair of hands for capitalism again, now that its flirtation with Corbynism has been thoroughly crushed. Whether the media will move back to supporting the Tories when a new leader is found remains to be seen. Immediately following the announcement of Truss’s resignation Keir Starmer called for a general election and this call was backed by the Liberal Democrats.

Unfortunately, if there is to be an election sometime soon and Labour were to be elected, this would not lead to the end of austerity or real gains for working people. Keir Starmer’s Labour Party will seek to calm the markets first and woo big business before (if at all) considering helping ordinary families. The capitalists are not in a mood to give ground to the working class, so any apparent gains made under a potential Labour government will probably prove illusory. Although it needs to be said that any Labour budget would be likely to be less extremist than Truss’s recent one and therefore less damaging to the broader economy in the short-term.

Alongside these events the unions are moving into action. Activists are also once more entering into environmental struggles and the NHS is on its last legs, with campaigners attempting to re-launch a united fight back. All the main nurses unions are balloting for strike action along with the teachers unions. This even includes the NAHT (National Association of Headteachers)! PCS (civil servants union) is also balloting. There are existing strikes as well as new ones about to emerge and the term national strike is now being used widely in the workers movement for the first time in decades. The resignation of Truss can only increase the confidence of these workers. Unfortunately, the TUC has not shown a fighting approach so far and seems unwilling to take on the role of coordinating national action. The Enough is Enough movement appears to be growing, with more on-line and face-to-face meetings, but this organisation must show its disconnect with the mainstream Labour Party if it’s to build into a mass movement.

Whoever the new leader of the Tory Party might be, the mood amongst the British people is palpable; they hold the Tory Party in contempt and are becoming emboldened to fight back. The difficult winter that faces them will add to this mood. With inflation officially over 10% and wages, especially in the public sector, falling further and further behind this rate the anger is sure to grow alongside the poverty that ordinary people are facing. This is why Suella Braverman, the ex-Home Secretary who resigned, pushed through Orwellian police powers. These in include the power to “apply injunctions against anyone who might carry out a protest that could cause serious disruption to key infrastructure and prevent access to essential goods and services or have a serious adverse effect on public safety”. The wording of this act is deliberately vague and abstract and would give the power to arrest anyone deemed to be in breach of the act. In other words, the power to arrest will be far broader. Braverman said that she “doesn’t want the likes of Extinction Rebellion and Friends of the Earth holding the country to ransom”. It is the Tory tribe that is holding us all to ransom; expecting the poor to pay for the crisis of capitalism while the rich run away with the profits from their labour, is exactly that.

Time is running out for the planet. Extreme weather events are increasing and global temperatures continue to rise. The temperature of the British people is also rising and sometime this Autumn it could boil over into a protracted struggle that could not only signal the end of the Tory government but precipitate an increasing consciousness that an alternative to this chaotic capitalist system has to be found. That is why all trades unionists, worker, students and citizens should unite in a broader struggle towards socialism and real change and not have any confidence that a Labour government will significantly improve the situation of the masses.

Share
Facebook
Twitter
WhatsApp
Viber
Email
Previous articleNigeria: Workers and Youths Solidarity Network on the end of ASUU strike
Next articleFighting for a new Left in Turkey, Greece, Cyprus – report from the Internationalist Camp in Cyprus