Truss – The new UK Prime Minister: weak, out of touch and a dogmatic neoliberal 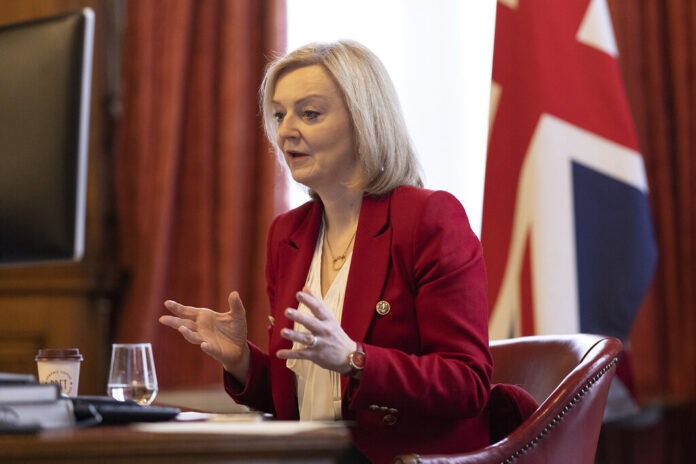 Liz Truss has manoeuvred her way into the position of leader of the Conservative Party and therefore Britain’s next Prime Minister. She will replace Boris Johnson in Downing Street immediately when he resigns. Truss, the current foreign secretary, received 81,326 votes compared to 60,399 for Rishi Sunak, the current chancellor of the exchequer.

As can be seen from the numbers above, only about 0.3% of the British people have voted in this election and therefore chosen the prime minister. Both Truss and Sunak are not popular candidates with the majority of the British population. For example, only 5% of people who voted Tory in 2019 believe that Truss is someone who “gets things done”. With a membership estimated at no more than 160,000, the Tory party does not have a popular mandate for the policies that Truss is likely to pursue. Truss appears to be much more of an “ideologue” than Johnson. Johnson was a right-wing populist who would change his position on many issues according to a whim. Truss has a mission to stick to a neo-liberal agenda and to enforce that onto the British people in the manner of a Margaret Thatcher, but without the political savvy of her predecessor. As foreign secretary for example, Truss has managed to alienate a large section of the civil service, not just at a junior level but much further up the ranks of the service. She is seen as a person with fixed ideas and who doesn’t listen to advice. She has expressed negative views about Emanuel Macron which have embarrassed her civil servants and not helped the current atmosphere in the European leadership circles. More widely, she is seen as of limited ability and imagination – simply repeating the same capitalist neo-liberal mantras, with no regard for the current global situation. Her enthusiasm for tax cuts, especially for the rich, is seen as completely out of touch with the current economic reality. Her distain for the poor and less able is palpable with scorn being poured on the education she received at her comprehensive school in Leeds – even though it is a school with a high reputation in the area and from which she won a place at Oxford.

The PCS (public and commercial services union) is heading up wide-spread strikes at the moment. The PCS is also leading a strong legal challenge to the (Truss backed) racist Tory policy of “exporting” asylum seekers to Rwanda. It is not out of the question that the FDA union (union for managers in public service) could be drawn into action against a Truss led government. Her pledge as foreign secretary to “wage a war on Whitehall waste” (meaning an attack on public sector wages), was met by despair by senior civil servants. FDA general secretary, Dave Penman said that, “Liz Truss’s pledge to ‘wage a war on Whitehall waste’ shows that her priorities are completely divorced from reality. The fact that she’s pledged to move more jobs out of London while at the same time pledged to cut regional pay for those very same jobs is just astounding.” He went on to say that, “instead of focusing on ensuring the civil service is attracting and retaining the right people to deliver the high-quality public services the country relies on, Liz Truss would rather take a page out of the P&O Ferries playbook and announce cuts to pay and terms and conditions in the press.” Truss was later to recant many of the proposed cuts in spending on the civil service.

As reported earlier, there is a perfect storm of strikes and protest building across the UK. Rail workers, civil servants, barristers, postal workers, refuse workers, NHS workers, etc are all moving into action. Truss has recently pledged to divert funds away from the NHS and into social care, when the NHS currently has a labour shortfall of over 140,000. Hospital wards are being run at staffing levels of 50% in many cases and nurses are being forced to pay for their training via extortionate loans. Social care is also in crisis with greater and greater numbers of care workers being forced out of the sector through low wages. The way to address this though, is not by pillaging the NHS of resources.

It seems that Truss feels that she can take on the unions, as Thatcher did in the 1980s. Thatcher’s chief approach was to crush the mine workers and she developed a strategy to achieve this. Truss will be fighting across a far wider front and the cost-of living crisis is going to propel greater and greater numbers of workers into struggle. Truss is already unpopular and there is talk in the British press of Johnson making a come-back in the future. The Tories see Johnson as a winner. It is rumoured that a cohort of Tory MPs are set to defect to Labour. Although Labour has limited support with British workers, a Truss led Tory government will be seen as an even worse option than a Starmer-led labour government.

The Truss policy announcements have already been seen to shift. For example,Truss initially appeared to discount significant help for people to meet the rise in the cost of gas and electricity. She has now been forced to come out very clearly in support of a subsidy to help consumers to pay their bills, something which cuts across her neo-liberal instincts.

Truss will be under intense pressure when she takes over as PM and she seems ill equipped to be able to deal with the pressures she faces. Her social, economic and political policies are seriously out of touch and the neo-liberal drivers for them are going to encounter serious resistance from British voters and her own civil servants. The trades unions in struggle will see her as a weak opponent, with no popular mandate. With support growing for increased wages and better working conditions, Truss’ government or Truss as leader could be de-railed at the first opportunity.