Colombia: The challenges that arise from Gustavo Petro’s historic victory 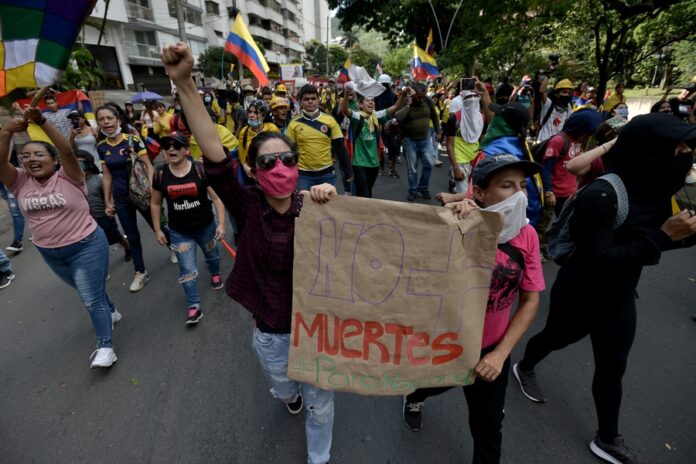 Gustavo Petro was sworn in as Colombia’s first left-leaning president on Sunday, August 7th, 2022. This followed a historic victory in the second round of the presidential elections held on June 19, in which he got 50.48 percent of the vote.

Petro beat his opponent, Rodolfo Hernandez, a corrupt right-wing mogul who said that he was “follower of a great German thinker named Adolf Hitler”. He then walked back on the comment saying he didn’t mean Hitler but… Albert Einstein.

Gustavo Petro’s and Francia Marquez’s (the vice president, an environmental activist and women’s rights advocate) victory opens up a new period for the political landscape in Colombia. It’s important to take note that Colombia was under US imperialism’s wing for far too long, and the local oligarchy was governing through violence and corruption. The Left and the movements faced murderous attacks and just some years ago, such a political shift seemed impossible.

But what are the challenges the Colombian masses will face from now on?

Petro was elected under a radical programme, but since his victory he tries to tone down his rhetoric. In his inauguration speech he declared:

“To take a part of the wealth of the people who have the most and earn the most, … should not be seen as a punishment or a sacrifice. It is simply a solidarity payment that someone who is fortunate makes to a society that allows and guarantees their fortune.”

So, according to his logic, the wealth of Colombia’s super-rich elite was not acquired through exploitation and corruption, but because some people happened to be… fortunate! And furthermore, if they agree to some “solidarity payment”, society will “guarantee their fortune”!

As a result of this logic, Petro in another statement said:

“We are going to develop capitalism in Colombia,” …

The choices he made for his cabinet ministers are also indicative of this. While some of the ministries are occupied by left-wing figures and activists, some of the most prominent positions are held by ex-ministers and cadres of previous right-wing governments.

Just to cite some examples, Finance minister José Antonio Ocampo said that “we need to work hand in hand with the high-income people”, while Minister of National Education Alejandro Gaviria has worked at the hated  Uribe government.

The tax reform and energy sector

On the first day of the new government, Petro introduced his new tax reform in the Congress. This is an ambitious reformist plan to tax high incomed individuals and corporations in order to fund his social policy agenda.

and, if implemented, is expected to boost tax revenue by $5.5 billion in 2023. This way, Colombia’s tax revenue would be raised from 13% of GDP, one of the lowest in L. America, to the regional average of 16%.

But Petro’s party does not have a majority in Congress, and that means that he will face continuous negotiations for the measures he wants to implement. Analysts say that the tax reform is unlikely to be accepted in the form that Petro proposed. Already, the first backtracking was recorded a few days later, when finance minister José Antonio Ocampo announced that the proposal to include a 10% tax on gold exports would be withdrawn.

The same uncertainty seems to be true regarding Petro’s claims about the energy sector. Petro before the election vowed to reduce Colombia’s dependence on oil and gas, to stop fracking and cancel new exploration plans. The picture in this field still remains unclear, but as José Zapata, a partner at the law firm Holland & Knight, said

“the incoming government is performing a confusing ‘juggling act’ between radicalism and moderation that affects the entire energy sector.”

Characteristic of the difficulties Petro will face, is the stand-off between the government and the state-run oil company Ecopetrol, which is controlled by the Conservative Party. In a battle over the control of the company, the previous management defended its corporate policies against “politicization”, while finance minister Ocampo said that it was an “attack on democracy.”

All the previous examples serve to illustrate that Petro’s road is bumpy ahead, and his government does not seem determined to clash with the ruling class, but rather advocate a moderate path to change.

Petro came to power riding the wave of popular national protests of 2021 against the Ivan Duque government. He also correctly targeted the people who abstained rather than the right-wing and center-right electorate. He formed campaign groups and election monitoring committees to prevent gerrymandering and electoral malpractice. All of this gave him and the movement edge, resulting in victory.

The objective situation in the economy and society also fuelled support for Petro’s Pacto Historico. Colombia, like many countries around the world and in Latin America, suffered during the Covid-19 pandemic. In 2020, its economy suffered a setback and livelihoods of millions of people were badly affected. Poverty rose from 35% in 2019 to 42.5 percent in 2020.

Petro’s victory was also part of the “new pink tide” of left-wing governments in Latin America, as such government were elected in 2018 in Mexico, in 2019 in Argentina, in 2020 in Bolivia, Peru, Honduras, in 2021 in Chile and in 2022 after Colombia will probably come Brazil. These developments feed each other as the continent has close political links between its countries.

During the campaign, Gustavo Petro’s promises got huge support from the rank and file of the people.

It is clear that Petro isn’t determined to completely break away from capitalism. But even his moderate calls for “democratization of the economy” are met with aggressiveness by parts of the ruling elite. In fact, it seems that the ruling class is divided on how to handle Petro. One part is fearful of the potential he could unleash, namely to boost the morale of the movement to demand more. Another part seems to understand that they have to “let off steam” and are trying to channel the new government to save their system.

About 40 percent of Colombia’s 50 million people live in poverty, while about 11.7 percent are unemployed. Inflation reached 10.2 percent in July this year. A commission set up by Petro said he is inheriting “a level of indebtedness and fiscal deficit that is critical.”

Petro’s programme is a reformist programme. But even moderate demands in this programme need radical policies to be implemented.

In order for Petro’s presidency to be successful there should be a break away from capitalism. The economy should be built in a way that the peasants, farmers and the entire working class would be part of the decision making and use their strength to build the country.

Petro’s government will face attacks from the ruling class and the big corporations if he attempts to touch their profits and domination. There must be lessons drawn from the imperialist attacks on Bolivia, Venezuela, Nicaragua and Cuba. There should be no illusions that a “middle ground” can be found with US imperialism.

The youth and the working class showed their strength and rocked the ruling class in the 2021 movement that ended Duque’s tax reform. The popular masses and their organisations should defend every progressive aspect of Petro’s policy, while at the same time fighting against every slip towards a reconciliation with the corrupt ruling class. There is a burning need to build a powerful political movement with correct tactics to win more radical demands. The working class and the labour movement should organise to fight both the right wing and the imperialist attacks.

The rich must finally pay and their wealth must be taken in the hands of society. That is the only road out of the horrors of Colombian capitalism. Only democratic control of society can end hunger and mass misery amongst the Colombian people. That means the overthrow of capitalism and a truly egalitarian socialist society installed.