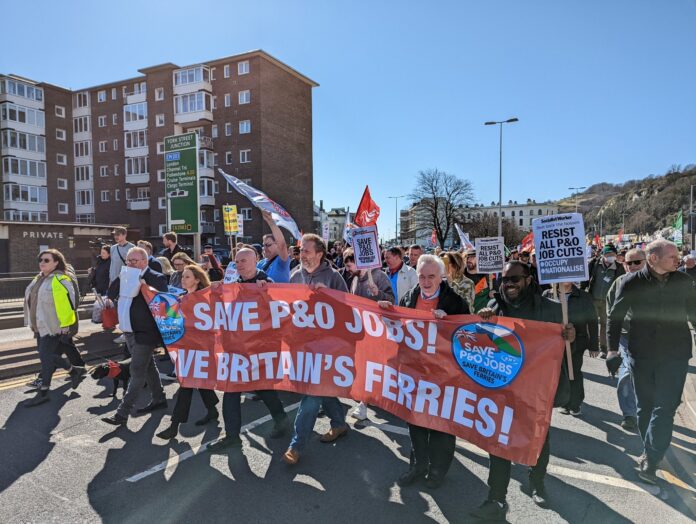 In an appalling act of aggressive management, P&O Ferries has laid off its entire ship-based labour-force of 800 officers and crew. All have been summarily dismissed without previous notice with a 3-minute pre-recorded zoom video message. P&O is owned by the huge Dubai – based company, DP World. Their stated reason for making this decision is that, “it (P&O) would not be a viable company without changes”. The crew was instructed to immediately disembark so they could be replaced by hired stuff, waiting on buses just outside the ports.

Mick Lynch, the general secretary of the RMT union said that,

“We are seeking urgent legal action and are again calling for the government to take action to stop what is fast turning into one of the most shameful acts in the history of British industrial relations…. If this happens at P&O it can happen anywhere and we are calling for mass trade union and wider public mobilisation and protest against the company.”

It has been reported that the police supported security guards, armed with handcuffs and balaclavas, to expel crew from the ships. This means that effectively the police were supporting the security guards in an illegal act, as the manner in which the sackings were carried out has already been assessed by Mick Lynch and others as illegal – a serious breach of employment law.

This in itself illustrates the role of the police – protecting the interests of capitalists over the interests of workers. Both the RMT and Nautilus unions had no warning of this act and the transport secretary, Grant Shapps, claimed that he had no warning either. It will be interesting to see what Boris Johnson has to say about this turn of events. Tories have long memories and the RMT Union, under the leadership of Bob Crow, won a tremendous victory in London Transport when Johnson was Mayor of London – an event that enraged him at the time and will probably still rankle with him.

It has been reported by the BBC that the P&O workers are to be replaced with foreign agency workers. This is not accurate because the agency staff being used to replace the P&O workers included British nationals. Some agency staff got off the coaches where they were being kept and went home when they saw what was taking place because they had not realised the nature of what they were being asked to do and didn’t like what they saw. It is important that this is not seen from a nationalist, “British Jobs for British Workers” perspective and that the fight is focussed clearly on the rights of workers of all nationalities.

The RMT union said it was one of the “most shameful acts in the history of British industrial relations”. There are protests planned across the ports of Dover, Liverpool, Hull and Larne. These protests need to be built into a demand for P&O to be brought into public ownership under workers’ control and all officers and crew to be re-instated on the same terms and conditions.

Britain’s shipping and transport infrastructure must be protected from capitalists of all nations, not from workers. The unity of workers across nations is especially important at this stage in the context of war and ever-increasing neo liberal attacks on worker’s rights.

DP World’s mission statement states that, “DP World is on an exciting journey of global transformation. A mission to re-imagine the global supply chain.” In this re-imaging they will seek to attack worker’s rights across the world on the altar of profit. The share-holders of DP World will be the beneficiaries while the workers will suffer redundancy and falling living standards. Does this re-imagining include the strife and suffering they inflict as part of this process?

Both Labour and Tory politicians have spouted platitudes about the unreasonableness of DP World’s action. We demand more than words. The trades union and worker’s movement needs to respond to this situation by fully mobilising behind the victims of this attack. To call for the nationalisation of P&O under worker’s control with no compensation.

Our readers can send solidarity messages to: dovershipping@rmt.org.uk