Nigeria: Workers and Youths Solidarity Network on the end of ASUU strike 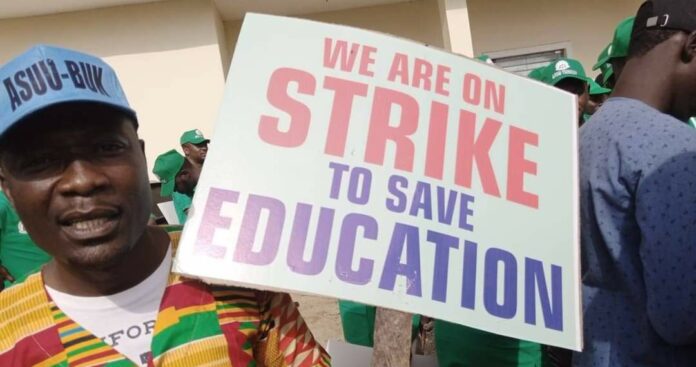 We publish the latest statement of Workers and Youths Solidarity Network

The Workers and Youths Solidarity Network (WYSN) welcomes students back to their various campuses across the country after 8 months of decisive yet avoidable strike action of the Academic Staff Union of Universities (ASUU). We salute the doggedness of the ASUU members who, despite the threats and harsh policies, stood their ground till this moment.

We also sympathize with the students who have been on the receiving end of the struggle and salute their support and solidarity so far knowing fully that the demands are for the benefit of the students and the future of education at large. While we acknowledge that the strike was called off conditionally in obedience to the court ruling, we call on the Federal Government to immediately meet the demands of the ASUU to prevent another closure of universities and further disruption of the academic calendar.

Of course, we could not expect a different outcome from the courts, as the justice system has been and is being used as an instrument of the government to further suppress the mass of the working people. Without reaching any concrete agreement, it enraging for the government to tool the court in order to compel ASUU to call off their strike. It further strengthens our argument that the government isn’t willing and ready to invest massively in education but rather prefers to enrich their own pockets, and those of their patrons, send their own children to school overseas, and leave the Nigerian education sector in absolute peril!

This is another sad example that underlines the need for the judiciary sector to be completely overhauled and placed under the democratic control and management of the people. As far as we are concerned, the choosing and making of a judge shouldn’t be a partisan affair! The people should be the one to vote, nominate and decide who becomes the judge. But in a situation like we have in Nigeria and other capitalist countries whereby the office of judges and attorney generals are conferred by the political elites, these officers can only but do the biddings of the capitalist rulers.

The fight for better education must continue! The Nigerian Labour Congress and Trade Union Congress must start to prepare, organize and mobilize for massive protests and strikes that will cut across every strata of the country. While we continue to prepare for the challenges ahead, we want to call on the students to show their support and extend their solidarity to the members of the ASUU and participate actively in the activities to compel the government to meet the demands of ASUU. It is until these demands are met and more concessions are won to the benefit of public education that we can have hitch-free academic calendars across board.