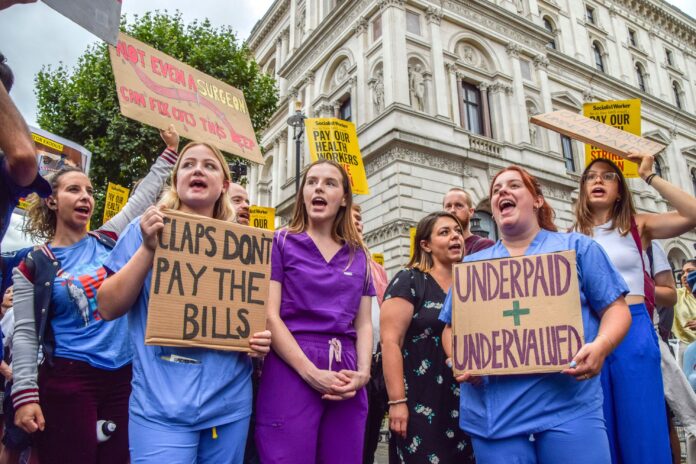 For the first time in 106 years, the Royal College of Nurses has taken strike action. This is taking place against a background of a government that is refusing to negotiate with the nurses on pay, saying their demand of 17% is out of the question. Negotiations should surely be taking place and should be about finding a solution to the crisis facing nurses’ standard of living, poor recruitment levels and motivating people to want to work in the NHS, rather than see the NHS fail.

This government has an unwritten policy of trashing the core services of the NHS and freeing up the profitable parts for privatisation. However, the private sector doesn’t want it all, only the bits that it can milk for profit because the infra-structure of the NHS has suffered from years of under-investment and would not be easy to make profitable.

Nurses are suffering because the government says it doesn’t have the money. Incidentally, Wes Streeting the Labour shadow health and social care secretary recently said the same thing – that a Labour administration wouldn’t give the nurses what they are asking for. The government complains that it will cost £10 billion, which is “unaffordable”, but during the covid pandemic it could find £37 billion for a test and trace system that didn’t work and put £8.7 billion into PPE that was ineffective and the funds from which were in large part used to line the pockets of Tory Party backers. The government has also squandered other vast sums, such as the £11 billion it spent on over-payments for interest on British debt and undisclosed amounts in supplying Ukraine with arms. It accuses the nurses and other workers of holding the country to ransom.

Postal workers have not been standing on freezing picket lines for the good their health, but in large part to save a postal service that is being exploited for profit, whilst run into the ground. Rail workers are fighting for a safe system just as much as for pay and nurses are well aware that the poor funding and political manipulation of the NHS is leading to significant numbers of unnecessary patient deaths.

That is why they are demanding better conditions as well as pay. There is nothing wrong with asking for a pay rise. The cap on bankers’ bonuses has been removed and wages in the private sector are out-stripping those in the public sector significantly. Agencies are ripping off the NHS when supplying staff, charging the NHS over £5000 for a single shift by a doctor and over £2000 for a nurse when they believe they can do so, claiming market forces as the justification.

At present we have the greatest levels of strike action in the UK for over 40 years. Workers have had enough. They increasingly, can’t afford good food, housing, heating and a decent life. They can see that if they don’t do something now, then their children will go hungry and their home will be cold. For many, this is already the grim reality of living under capitalism in the twenty first century.

The widespread strikes that are taking place at the moment are set to continue over Xmas and into the New Year. With the government and their representatives unwilling to negotiate, then it’s difficult to see where it will end. The government hopes that it will end in the defeat of the unions and so play a waiting game. The unions act individually to achieve better terms for their employers. At the current time there is talk of uniting the struggles, with Enough is Enough, trades councils and others trying to coordinate those in struggle and those who support their aims. There has been a feeling of support for workers from many but this has yet to be translated into decisive action, although there have been numerous rallies held in freezing conditions across the UK in support of the strikes and the picket lines have been visited by thousands.

Labour not an answer

Speaking to the Council for British Industry (CBI) last month, Keir Starmer went out of his way to reassure business that he would work with them in partnership. There were references to the trade unions in his speech as well the aim to end the low wage economy. Was he appealing to capitalists’ ‘better nature’? Doesn’t he realise that capitalists are forced towards the most exploitative practices? There is no sentiment in business, especially big business. Its aim is profit, profit, profit. The CBI applauds him because its members know that they can manipulate the next New Labour government towards pandering to its desires, dressed up in a sham liberalism, as they did the previous New Labour government. When Starmer spoke of the end of a low wage economy, he made no mention of how that end would be achieved. Having been a barrister, he was accomplished at telling juries what he thinks they want to hear and he has used this approach in addressing the working class. The capacity for capitalism to drive forward the living conditions of the masses in the modern period has been roundly disproved. The insane trauma of the Second World War, which gave a stimulus to capitalism during the 1950s and 60s, especially in the United States, is hopefully not to be repeated. The myth that in the twenty first century capitalism has the answers is a lie that all those on the Left must challenge. Nor can the Labour Party take any credit for the collapse of support for the Conservative Party. It is Tory incompetence and arrogance that has led to their demise, not smart tactics from Labour.

During the climate strikes of 2018 and 2019, youth understood instinctively that capitalism didn’t have the answers. The slogan, “system change, not climate change,” resonated then as it should do now. Those on the Left who stand in the way of this and prevaricate are preventing the development of radicalism, when time is running out for the planet as well as for the working class.

Unity is strength. We need to reach across the struggles and link them together. Individual unions cannot be allowed to be picked off by this government and accept derisory settlements. There is talk of a general strike across the movement and we should all be pushing the TUC and unions to work together towards this in an intelligent manner, so to avoid easy success for the state in quelling such a move. To achieve this will take time, but the people who could propel this development the fastest are the tops of the unions and the TUC. Are they speaking to one another? Are they listening? One can only hope so. If they don’t, the bear criminal responsibilities. In truth, it’s time to remove funding from the Labour Party and use it for building a new force for change, both inside the trade unions and across the movement. What this force could look like has yet to be determined but the need for it is palpable.