November 25: On with the struggle to eliminate violence against women, patriarchy and capitalism 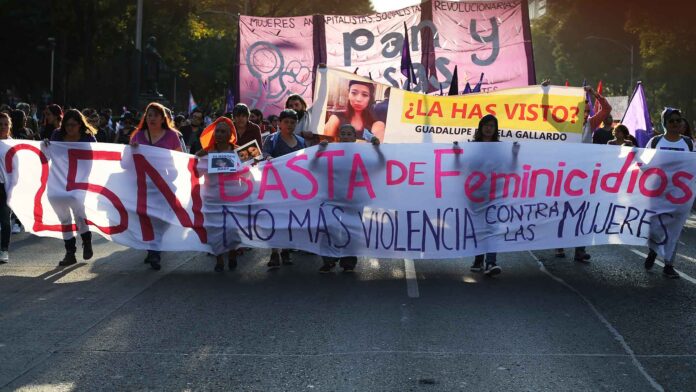 One in three women have experienced violence at least once in their life. One in five have been raped. Every single day, 137 women are killed all over the world. These numbers, even though they come from a 2017 UN report, are very telling about the level of violence that women face every day all around the world. The numbers have actually risen since then, especially during and after the pandemic, when there was a surge in femicides, even in the developed world, but the international institutions hesitate to give exact numbers.

The impunity of perpetrators and victim blaming are normalising sexist violence. This is just another way to perpetuate patriarchy. Women are regarded as “second-class citizens”, as “property” and as “inferior” to men, even if they have won many basic rights and achieved important changes in the legal system, throughout decades of struggles. In capitalism, being considered inferior means that one is expected to be subjected to violence. Of course, women are not the only ones facing violence in their everyday lives. LGBTQ people, immigrants, workers demanding their rights, people of colour, national and ethnic minorities, Roma people, just to name some examples, also face violence and repression by the system and is acolytes.

In this context, the International Day for the Elimination of Violence against Women (set for November 25) marks changes in the situation this year. On the one hand, women are fighting against violence, as we saw in the Iranian uprising. On the other hand, governments, state machines and conservative institutions are trying to turn the clock back and reverse even those rights that have been won through bitter struggle. It’s a tug of war, and we have to put all our forces into it.

The justice system protects the rich

This year, the role of the justice system in covering up rich rapists was the order of the day for most capitalist countries around the world.

The decision of the US Supreme Court to overturn Roe vs Wade, which was the precedent that first enabled abortion to become legal nation-wide, served as a reminder that the judicial system is not about providing justice but about serving the rich and the conservative. The decision came as a result of a Christian conservative decades-long campaign; the Trump regime achieved its purpose, even after Trump was not in power anymore.

Banning abortion might not qualify as a direct act of violence against women, but it is one indirectly. Women in need of an abortion are bound to revert to illegal ways in order to end an unwanted pregnancy, and this can leave them with important health issues or even lead them to death.

The overturning of Roe vs Wade in the US will spark new attacks against women’s rights all over the world. Even in the ‘progressive’ EU, conservatives are reported to have used a total of $81.3 million from US donors to fund ‘activism’ against abortion and other conservative causes between 2009 and 2018. This does not change, even if conservative women are in the leadership of EU institutions; the President of the European Parliament, Roberta Metsola, for example, is a vocal enemy of abortion rights.

Meanwhile in Iran, Mahsa Amini was murdered by the “morality police”, accused of  “dressing inappropriately” because some strands of her hair were not covered by her headscarf; this is the most well-known case of violence exercised on women by the state and religion this year.

The Islamic regime has been oppressing and killing women for 44 years now. Women are obliged to wear a headscarf (hijabi) every time they leave their house, and morality police agents are stationed at central locations checking whether women are complying with the rules.

It is legal for girls over the age of 13 to marry, although it is not uncommon for girls as young as 10 to marry with a court permission granted to their fathers. According to Amnesty International, 31,379 girls aged 10 to 14 got married between March 2020 and March 2021, a 10.5% increase compared to the previous year.

Women are considered a “possession” of their father or husband and cannot travel abroad without permission, they are not allowed to ride bicycles (!), they can only seek divorce under certain circumstances and if they remarry, they lose custody of their children.

While the governments of the EU and the rest of the western world are condemning the murder of Mahsa Amini and the violation of women’s rights in Iran, they are energetically participating in the war in Ukraine, sending weapons to a regime which has a very bad record in that respect (not to mention other western allies such as Saudi Arabia and India).

Rape is always a weapon of war and it has of course been used also in Ukraine. At the same time, poverty and immigration hits women harder.

In Russia, in 2017, first instance domestic violence was decriminalised. Meaning that any kind of violence not resulting in important injury and hospitalisation is classified as an administrative offence. In 2018, the government statistics agency recorded a total of 8,300 women killed. That works out at 22 a day. Imagine what will happen to women when husbands or companions return from war. It is well-documented that domestic violence increases when soldiers return home after a conflict is over.

Femicide in the penal code

Femicide is recognised as a separate kind of crime than homicide by the UN and the WHO. The reason for this is that femicide stands for murdering a woman because of her gender, because the perpetrator considered her his possession and an object, over whom he had absolute power. The UN has actually started a campaign to push governments to formally recognise femicide as a distinct crime. In the past year, they only managed to “persuade” 3 more countries, raising the number of countries adopting femicide as a distinct crime in their penal code to 18 (up from 15).

One of them is Mexico, a country with a long record of femicides. However, there is also a strong feminist movement in the country, which has managed to push the government to adopt a series of policies in support of women’s rights. Nevertheless, there have been attempts to undo the law that recognizes femicide as a criminal offence in the last year.

Describing femicide as a distinct crime in the penal code is an important and valid demand. Refusing to recognise this fact serves as a coverup for sexism existing in our society. This initiative of course is not sufficient to solve the problem, nor to stop femicides. Figures in the UN Women report tables listing the numbers of femicides in Latin America suggest that violence is increasing or at best remains stable, even in countries where femicide was recognised in the penal code as a distinct crime. However, this would provide a better picture of the extent of the problem and give more tools to our society to demand change.

Iranian women who took to the streets after Mahsa Amini’s assassination serve as an inspiration to all women in struggle. They burned their headscarves, cut their hair and heroically protested against a brutal religious regime. Their protest ignited a revolt with ongoing nationwide protests and strikes demanding the fall of the regime.

No international institution, no imperialist power will fight for our own rights. Only the women themselves, fighting alongside all the oppressed layers in society, can make headway.

-Stop victim blaming! No means No! Sex without consent is rape, and that holds true even within a marriage or a relationship.

-Introduce comprehensive sex education in all levels of education.

-Stop the impunity of the perpetrators! Heavy penalties for femicides and rapes.

-Persecution of policemen and members of the judiciary system manifesting sexist, misogynist behaviours.

-Clear procedures and protocols when dealing with rape victims; special training is necessary for all those involved; victims should be provided with a lawyer, a translator, a doctor and a psychologist, where needed, for free.

-Free public shelters and crisis /support centres for victims of domestic violence. Help for the victims regarding work, housing, welfare, ect, until they can stand on their feet again.

Patriarchy is the ideology that defines women as being inferior to men or even their objects of property. This concept is practically normalising and justifying violence against women. It is a concept built into the capitalist system, which is achieves multiple benefits from it: paying women less, exploiting special markets relating women and their role in society, ect. Moreover, if we look at the bigger picture, by considering some persons superior to others, capitalism perpetuates division among the working class, the precarious and the poor. Division is crucial for the survival of the system, as people waste their energy in fighting with each other, instead of coming together and fighting against their oppressors. Our struggle against patriarchy and sexist violence is part of the struggle against capitalism. We need to fight this struggle hand in hand with all other oppressed groups, in order to achieve our rightful demands.

Share
Facebook
Twitter
WhatsApp
Viber
Email
Previous articleStop the attacks of the Erdogan regime in Kurdish areas- statement by the Labour and Freedom Alliance
Next articleInternational Debate: War in Ukraine – How should socialists respond?