International Debate: War in Ukraine – How should socialists respond? 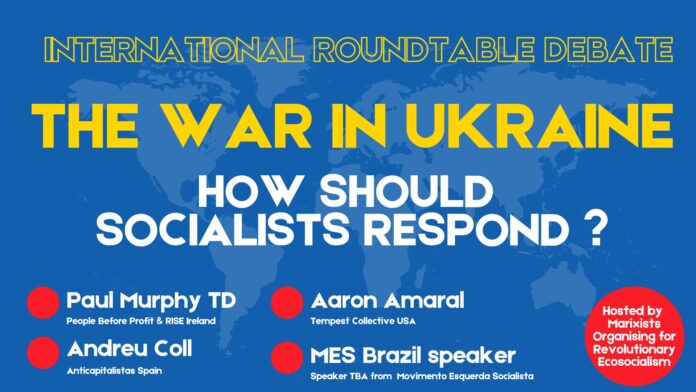 We re-post the details of the public meeting organised by the Marxists Organising for Revolutionary Ecosocialism (MORE) collective on the international debate that has opened up inside the Left about the war in Ukraine.

The war in Ukraine has sparked intense discussion and debate among socialists and Marxists worldwide about how to understand and respond to this war. Should socialists support or oppose the sending of weapons and military aid to the Ukrainian government from the NATO governments? What is an internationalist and socialist strategy to end this war, defend the interests of the working class, fight for democracy, justice and self determination and avoid a catastrophic nuclear conflict?

To facilitate this debate, MORE are bringing together a roundtable discussion. Marxists internationally have generally taken two different perspectives. While there is no disagreement that we have to deal with questions of self-determination of the Ukraine, of Russian and of Western imperialisms, the conclusions fall more or less in two camps: Some argue, that socialists around the globe should support the struggle for self-determination of Ukraine and therefore support military supply also by the US or other Western countries; others argue that in this inter-imperialist proxy war socialists for example in the US have to object to Biden’s billion strong military aid in favor of the pro-capitalist, pro-NATO Zelensky government.

Based on mutual respect for the different opinions of Marxists, this debate with representatives of both sides aims to clarify the issues and contribute to a better Marxist understanding of the challenges involved. We will hear from:

This event will take place Sunday December 4th on zoom at: 10am Seattle (Pacific Time), 1pm New York (Eastern Time), 3pm Brazil, 6pm Ireland/Britain/Portugal and 7pm Germany/France/Italy. It is open to all to attend and there will be space for questions, comments and contributions as well.

To attend simply sign up at https://cutt.ly/ukraineroundtable and we will send on the zoom link for the meeting & a reminder.

Marxists Organising for Revolutionary Ecosocialism (MORE) are an international collective formed by Reform & Revolution in the US, RISE in Ireland and Lernen im Kampf in Germany.

Share
Facebook
Twitter
WhatsApp
Viber
Email
Previous articleNovember 25: On with the struggle to eliminate violence against women, patriarchy and capitalism
Next articleTrotsky: the speech in Copenhagen- November ‘32