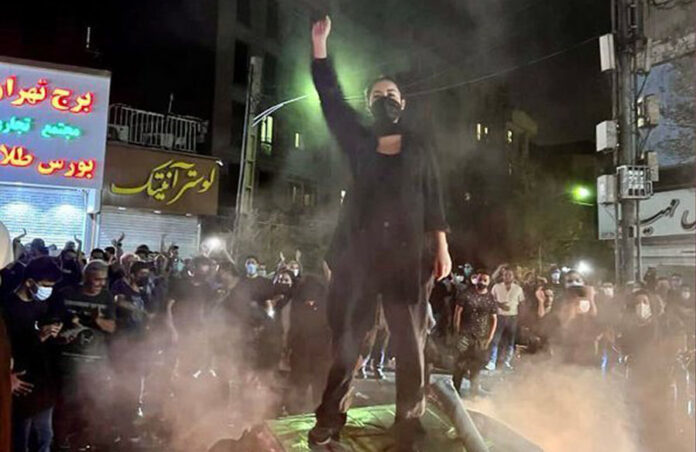 On September 13, 22-year-old Mahsha Amini was arrested by the “morality police” in Tehran for “dressing inappropriately” because some strands of her hair were not covered by her headscarf.

After her arrest, Amini was so violently beaten by the police officers that she ended up in hospital, where doctors diagnosed her as brain dead. Three days later, on September 16, the young girl’s death became known. Although the authorities and the police tried to blame the causes of her death on a supposed heart condition and on her fragile health, her relatives and friends decided from the very first moment not to remain silent, to make it clear that the girl was perfectly healthy and to turn her funeral into a protest.

Being a woman in Iran

Amini’s murder by the police was not the first similar case, as state violence against women is an everyday reality in Iran. A month earlier, police had snatched a young girl from her mum because her dress had been lifted up to reveal part of her ankles!

Overall, women in Iran are classified as “second-class citizens”, but even this term does not describe the whole picture.

They are obliged to wear a headscarf (hijabi) every time they leave their house, and morality police agents are stationed at central locations checking whether women are complying with the rules.

It is legal for girls to marry over the age of 13, although it is not uncommon for girls as young as 10 to marry with a court permission granted to their fathers. According to Amnesty International,  31,379 girls aged 10 to 14 got married between March 2020 and March 2021, meaning there was a 10.5% increase compared to the previous year.

Women are considered a “possession” of their father or husband and cannot travel abroad without permission, they are not allowed to ride bicycles (!), they can only seek divorce under certain circumstances and if they remarry, they lose custody of their children.

According to a recent World Economic Forum report, Iran is ranked 143rd on gender pay gap out of 146 countries examined around the world. According to surveys, Iran scores the highest rate in domestic violence incidents in the world: 66% of women in the country are victims of domestic violence, which is double to the global average of 33%.

17-year-old Mona Heydari’s story from last winter is perhaps the most telling example of what it means to be a woman in Iran today. The girl, married since she was 12 and a victim of domestic violence, managed to escape from her husband last summer and reached Turkey. Her father reported her to the authorities, who provided him with all the information necessary to spot her and make her return home. It was there that her husband, along with his brother, beheaded her to “restore the honour of the family”. They then went out into the streets smiling with the girl’s head in hands.

This reality had already prepared the conditions for anger to explode against the violence and discrimination suffered by women. After all, over the past few years, protests against the headscarf and the violation of basic human rights had been on the rise.

All in all, the last decade in Iran has been marked by massive protests and mobilisations against poverty, price hikes, anti-worker policies and the corrupt political system. Thus, Amini’s murder by the police was the spark for the outrage of both women and society to burst against the theocratic regime surviving on the backs of the working class. The uprising that began after Amini’s assassination has touched mass layers of the population who are protesting not only against the oppression of women but also against police repression, declining living conditions, lack of basic democratic rights, the exploitation of workers, etc.

Women and men on a joint struggle

Women protesters and demonstrators gathered outside the hospital where Amini died and in central streets near it, from the very moment her death became known. They were chanting slogans such as “I swear to Mahsa’s blood, Iran will be free” and “Khamenei is a murderer, his government is invalid”.

Amini’s funeral turned into a political protest, with women taking off their headscarves and chanting anti-hijab slogans. Many protesters were attacked by police and at least 13 were shot.

The Iranian regime is facing a dilemma: if it does not use police violence and repression to discourage and suppress the movement, it is risking its rapid growth. On the other hand, harsh repression could provoke an even bigger reaction that could spiral out of control. The regime is in such a difficult position that Khamenei has made no statements about the uprising so far.

“Second-class citizens” have stepped forward to fight, with heroism and self-sacrifice during these last days in Iran, in the same way that we have witnessed in many cases. The pictures of women of all ages taking to the streets, burning their headscarves and cutting their hair (which is considered illegal by some Islamic authorities), in mass confrontational protests, have inspired millions of people worldwide.

The regime is trying to push back

The rallies and marches have initially been highlighting women’s oppression. But they adopted a character of an overall challenge to the Iranian regime soon enough. The regime has immediately passed on the offensive. Police forces are striking the demonstrations that have spread to many cities in the country, arresting demonstrators and attacking them with water cannons and teargas. At the same time, they have effectively “shut down the internet” in order to prevent the transmission of information and the coordination of the mobilisations.

On Friday, September 23, after prayers, supporters of the regime took to the streets against the demonstrators. They were responding to the President’s of the Islamic Republic, Ebrahim Raisi, implicit call who stated that there is freedom of expression in Iran, but these protests are unacceptable “acts of chaos”; army leaders also stated that the military would confront “the enemies” behind the unrest.

Since the early days of the protests to date, more than 700 people have been arrested and more than 50 have been killed.

In the context of this uprising, the hypocrisy of the Western governments is impossible to ignore. There are governments allied to the Western block who violate women’s and human rights, like Saudi Arabia. But this simply goes unnoticed by the Western authorities and media. On the other hand, governments that are not in good terms with the West and violate such rights, are subject to representatives of the Western bourgeoisie public angry criticisms. Thus, we witness a crocodile tears show in the Western media about Iran. Of course, had Iran agreed to make a deal with the West and provide an alternative to Russian oil, most certainly the issue of the uprising would have just been minimised by the western media. Western governments obviously want to use the uprising in order to impose their own agenda or a regime they will fully control. The Iranian insurgents should know that the only thing the ruling classes in the West care about is their interests and not people’s “rights”.

The heroism of women -and men- defying an extremely cruel theocratic regime like the one of Iran has been an inspiration and has provoked a wave of solidarity among millions of people around the globe. Women demonstrators in Iran are participating in the protests knowing that they will face brutal police repression and yet they are not bowed down. Instead, they continue to take to the streets en masse.

Oppressed women, the same who are treated as the property of their male relatives in Iranian society, are demonstrating their power and the leadership role they can play in the movements. Power that accumulates along with anger through years of oppression.

The enemy they are facing is extremely powerful and will not back down easily. It also has fanatical religious supporters on its side. The international solidarity and support for the Iranian uprising is extremely important to help the difficult but also hugely inspiring struggle of Iranian women and men.

Share
Facebook
Twitter
WhatsApp
Viber
Email
Previous articleUK: The Enough is Enough campaign, the Left and the Unions
Next articleBelgium: More than 10,000 workers in the national trade union action on September 21st