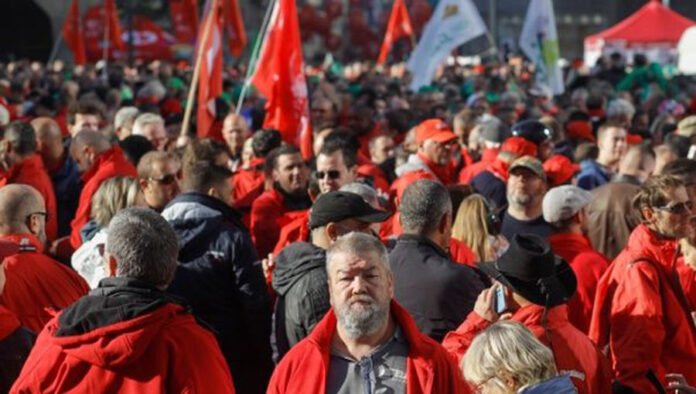 September 21st was a national trade union action day in Belgium. The action day was already decided after the recent very successful strike in June. Back then the main demand was the abolition of the ceiling to wages indexation. This is regulated by a law dating in 1996 and it would also be discussed at the federal parliament. In the meantime though, electricity and gas bills have exploded, as also have the basic goods shopping list costs, so the demands about controlling the energy and basic goods prices have made it to the top of the list on the actions’ day.

The actions were called by the main trade unions of both public and private sector, resulting in important work stoppages and disruptions of services such as public transport and the post. The Brussels airport was also significantly impacted, as workers of the sector are fed up with cuts in staff, which are making working conditions impossible and contribute to the well-known mess of the airports that made the media headlines during summer.

One main action was called in Brussels. Trade union delegates were involved and the number of participants was well above the 10,000 reported by the police. The gathering was followed by a march to the Industries Federation headquarters. The ambience was militant and people seemed to be well determined to continue struggling, as everyone is considerably affected by the prices’ rise, the exploding electricity and gas bills and how expensive everything has become. Indeed, a national day of strike has already been announced for November 9 and everyone agrees on how important this is and that it needs to be well organised and prepared.

The PtB (Workers Party of Belgium) and the trade unions plead that the energy prices need to be controlled and regulated by the government so as to protect the workers’ income. The government has so far provided consumers with one-off support payments, which in the end was beneficial to the energy companies; this is because these initiatives do not affect their profits, only slightly relieve the households. The people’s monthly income has of course been supported by these payments, but this cannot be a long-term solution and practically does not affect how the market works. Once more the government is injecting money to the market in crisis, which ends up to the big companies’ profit, while increasing the public debt. But this will have to be paid off at a certain moment, so the bill will eventually return to the workers in the long run. We’ve seen this before, at the times of crisis, when the governments bailed out the bank sector, to prevent it from collapsing, but the final bill returned to the workers, with budget cuts affecting salaries, pensions, employment and public services.

Therefore, a crucial demand in this context is that the energy sector is nationalised and run under workers and social control and management, instead of the private market. This is the only way for the prices to go down, with a plan to utilise energy resources to the benefit of society and the environment. At the same time, the real income of the workers needs to be protected and supported and this can only happen if salaries are adjusted to inflation and the reality of costs, while prices are kept down. The private market will of course never do that, workers need to fight and demand that it is done by the government.

In Belgium people are fed up with struggling to make ends meet and counting pennies at the end of the month. Workers seem to be ready to struggle and continue the fight with more actions and strikes, as they see no other way for their income to be safeguarded. Trade unions though are not militant enough and hesitating, and the strike of November 9 has only been decided because of the people pushing for more actions.

This crisis, of course, is not only affecting Belgium, the situation is similar in the other European countries. A wave of protests, strikes and struggles all over Europe will feed one another and give strength to the workers to fight. The capitalists and their governments want to put the burden of this crisis on our shoulders. We need to coordinate, for a common struggle across the continent.