Nine years since the murder of musician Pavlos Fyssas by the Nazis: He died standing! 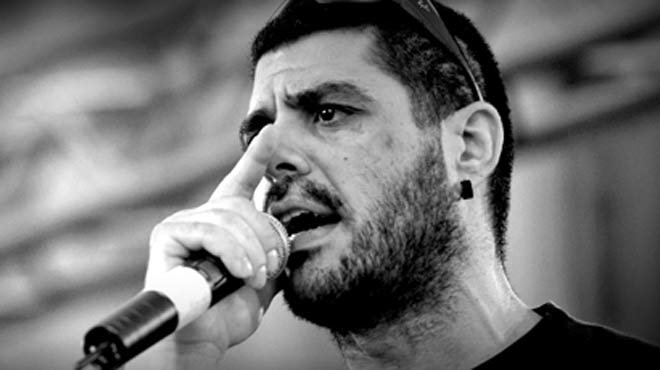 Nine years ago today, the fascist thugs of Golden Dawn killed Pavlos Fyssas (April 10, 1979 –September 17, 2013). This event led to a huge outcry by the antifascist movement and progressive people in general, which in turn provoked the long-due trial of Golden Dawn and its subsequent condemnation as a “criminal organisation”. Since then, the fascists in Greece have been trying to make a comeback. That’s why it’s important for the antifascist movement to remain active and vigilant.

This article is dedicated to Pavlos’ life and legacy and was published on www.xekinima.org on September 22, 2013, a few day’s after Pavlos’ death.

“A day like this is a good day
to die beautifully
standing up in public view.”
Killah P, “Zoria”

Can anyone “die beautifully”? No one can give an answer to that question. But Pavlos Fyssas certainly died “in public view”. He was killed by cowards- and they killed him because he lived “standing up”. Not only did he live standing, but he also died standing. His killers, by contrast, lived by crawling and bowing down before their bosses.

Raised in the working-class neighborhood of Keratsini, Piraeus, Pavlos was brought up acquainted to the struggle for survival from a very young age. He was the son of a worker in the shipbuilding zone of Perama (colleagues knew his dad as master-Takis). Pavlos followed in his father’s footsteps and went to work there as well.

He worked as an assistant from 1998 to 2003 – for the periods when there was steady work at least. In the following years, he devoted himself mostly to music, but he was still taking on occasional day shifts in the shipbuilding industry until the very end. He was a member of the Piraeus Metal Union (like his father) and participated in the industry’s mobilisations on a regular basis.

An artist that did not compromise….

From his school days he loved hip hop and quickly turned from a follower into an active participant. He wanted to express in his lyrics everything that was making him suffocate.

His first artistic efforts were linked to the “low bap” music movement in Greece. From 1997 to 2001 he participated in the band “Kaka Mandata” (translated as “Bad News”). He later continued on his own, using the pseudonym Killah P or Killah Past. He explained that his nickname was based on his belief that we should not repeat the mistakes of the past and continuously evolve. He participated in various bands and art projects, and went on to complete a number of collaborations with major artists in the hip hop scene.

Pavlos believed that art should not be a commodity. He distributed his music for free via the internet, and was never interested in PR or record labels. He preferred to express himself freely and independently rather than be confined by the music industry. He preferred to talk about everyday problems that working class kids face. As Totem, his friend and collaborator in “Kaka Madata” mentioned, there was a time that Pavlos couldn’t sing for their second demo because he was so exhausted from work that he fell asleep in the studio and couldn’t wake up even after prompting.

He had decided to go his own way. He knew exactly how managers and the big music media interpreted hip hop. Pavlos would be talking about the real problems of society, while they would have wanted him to write lyrics about expensive cars and fistfights, woven in, of course, with the usual sexist clichés. As he, himself, mentioned in an interview:

“…rap is a very dangerous weapon wielded by equally dangerous and perverted minds, and that’s what its whole culture is based on…”

In his lyrics one doesn’t always find answers. But the right questions are always present: social injustice, state repression, fascism. The policemen that murdered Alexandros Grigoropoulos (in Greece) and Carlo Giuliani (in Italy), the corruption of bourgeois politicians, the lies of the media, the TV trash shows, consumerism and cynicism projected as role models, all emerge through his lyrics, awakening consciences.

His opposition to fascism was known by his friends but also by his enemies. A former member of the local organization of the fascist Golden Dawn in Pireaus stated in an interview:

…and meant what he wrote

Many artists, of course, speak about social injustice through their songs. As we all know, however, few of them put their words into action. Pavlos belonged to the second category.

A relevant incident is described in a letter, sent to the media, by fellow rapper and friend of Pavlos, Christos Panoilias. The letter described the time when in early February 2012 a wave of very low temperatures struck Athens and threatened the lives of homeless people. Pavlos took the initiative to invite local hip hop artists to cruise the most degraded neighbourhoods of the city centre, making sure the homeless knew of places they could spend the night and helping them get to a safe shelter. In fact, during this initiative, men of the elite police DIAS team on patrol stopped the participants in a threatening manner, questioning them about who they were and why they were doing what they were doing. One can only wonder if any of them were also in the group of police officers who were “discreetly” watching the murder of Pavlos 1,5 years later while not intervening… That, we will never know…

Pavlos had no particular political party affiliation. But he was clearly against the fascists and the capitalist system, clearly on the side of the oppressed. And what he believed, he put into practice. He participated consistently in social movements.

“He was the type of person who, if he saw a girl being harassed on the street, would run to help,”

as Totem says. His friends and associates knew very well that if they were ever in trouble, Pavlos would do everything he could to support them.

Because Pavlos had honor. His murderers, on the other hand, know only of blood*.

Pavlos Fyssas lived and died standing. Even at the exact moment of the attack, his first concern was to protect the weakest in his company. He stood up to the fascist herd and confronted them. He looked at the bullies in the eye and invited them to charge one by one, if they had the guts. We all know they don’t.

No matter how much the media try to convince us that “two extremes” collided that night, we know very well that in fact, it was two different worlds that collided. On the one hand, the selflessness, courage and militancy of the working class as expressed by Pavlos Fyssas. On the other hand, the rottenness, thuggery and cannibalism as expressed by the Nazis and ultimately the system that breeds them.

The conflict between these two worlds did not end that night – and it will not end until our world emerges victorious. This will not be easy and will certainly not happen “overnight”.

But Pavlos’ stance fills us with courage in all those moments when we feel “small” and “weak” in the face of the system and its watchdogs.

His name and face will live within our slogans, flags, songs and banners. It will give us strength to get rid of this rotten system as quickly as possible.

When we do this, we’ll have become “killers of the past”. This will be the best possible retribution for Pavlos’ death.

The Sowore candidacy and the 2023 Nigerian elections

The UK Strike Wave is intensifying