By Internationalist Standpoint
May 19, 2022 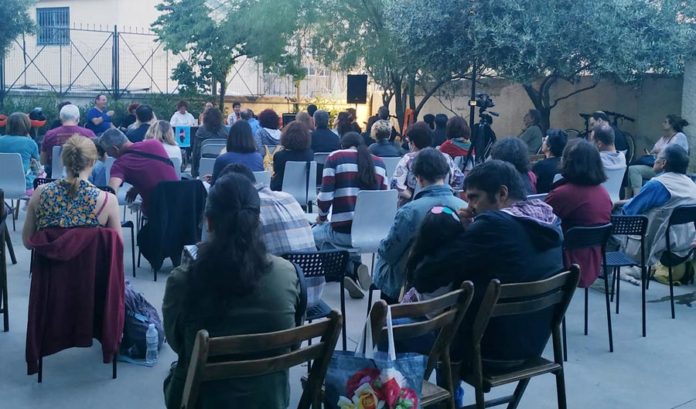 On Saturday, May 14th, the initiative “Kazma Birak / Μας σκάβουν τον λάκκο / Don’t Dig” organized a public meeting on: “The war for energy & the movements in Greece, Turkey, Cyprus“. The discussion was opened up by members of the initiative from Greece, Turkey, and the north and south of Cyprus, while representatives from environmental movements and left-wing organizations also participated. In total, over 100 people attended the event at the premises of the Association of Greek Archaeologists, while the discussion was broadcasted live by the OmniaTv media outlet.

The threat of extractions

On behalf of the Greek coordination of the initiative, Kyriakos Hallaris, referred to the hot incident between the Greek and Turkish fleets in the summer of 2020, which was the main reasoning behind its creation. It was based on recognizing the need to build a common front including all three countries, which will oppose hydrocarbon extractions in the Mediterranean and Aegean seas, both for environmental reasons and because it renders the region into a potential centre for geopolitical conflict. This need brought together a number of environmental movements that formed the “Kazma Birak / Μας σκάβουν τον λάκκο / Don’t Dig” initiative.

Since then, explorations for oil and gas reserves has, to some extent, fizzled out, while a number of big energy companies that had shown interest in the region’s hydrocarbons have now withdrawn. However, the current war in Ukraine has resurfaced the issue of hydrocarbons, cancelling the, already extremely inadequate, plans for reducing emissions of air pollutants, internationally.

Regardless of whether or not the East Med project will eventually be realized, the war in Ukraine and the energy crisis are bringing back possible scenarios for oil and gas extractions. Nonetheless, the Greek-Turkish conflict will carry on and the hydrocarbons in the Mediterranean will continue to be one of the central points for tension. In the face of this uncertain future, it is important for the environmental movements to remain vigilant and to continue to build links of solidarity between the peoples of the countries involved in the conflict.

Foti Benlisoy from Turkey, described the recent “suspension” of Greek-Turkish antagonism, due to the freezing of the EastMed plans as well as the change of phase that the Turkish foreign policy is experiencing. He explained, however, that this phase does not negate the central objectives of the Turkish ruling class, which for several decades, has been emphatically trying to reinforce its position in the wider region. Despite the differences between the two main political camps, the islamists and the kemalists, the main aim for both is to make Turkey a regional power. This external aggression is also designed in order for the establishment to be able to respond to domestic economic and political problems, among other things.

In the face of the upcoming elections in about a year, the Erdogan government will fight tooth and nail to avoid defeat. Among other things, we will undoubtedly see a new wave of authoritarianism and warmongering. The recent, extremely strict, sentences against activists of the Gezi Park movement, as well as the ongoing public discussion about the possibility of banning the pro-Kurdish HDP party, are steps towards this very direction. In this context, the environmental and anti-war movements will face serious challenges that make cooperation and solidarity between them extremely crucial.

Profits for companies, destruction for us

Çağla Elektrikçi from the north of Cyprus, described how hydrocarbons have been added to the well-known and ongoing elements of the Greek-Turkish rivalry (for example, the Exclusive Economic Zones, the “grey zones” in the borders, the non-inhabited islets claimed by both states, the Cyprus question, etc.), aggravating these problems. Although in Cyprus natural gas has been presented as a tool for bringing peace, everyone knows that the ruling classes have never shared the resources they are interested in peacefully. We also know that the profits from the eventual extractions will actually be shared by the energy companies and not the poor people.

Today, on both sides of the island, the race for arms is intensifying, as is nationalism between the two communities. Nevertheless, the 2020 incident has provoked fear in significant parts of society, along with a sense of need to resist the danger of war.

At the same time, there is fear over the potential environmental disasters that mining will bring. There are currently over 200 drilling platforms in the Mediterranean, an earthquake-prone region that survives primarily from income generated by tourism and fishing.

Myrto Skouroupathi from the south of Cyprus, referred to the broken promises of the Greek Cypriot government and the lies that they were reinforcing for years with regards to the alleged benefits of hydrocarbon extractions. One of the main arguments was that “Cyprus will become Norway” and that the profits from hydrocarbons will lead to higher living standards for ordinary people. There have even been cases of people who organized their studies and their lives around the prospect of the development of the extractive industry. Today, of course, the necessary infrastructure does not even exist, even the LNG terminal has not been built, and the myth of wealth from hydrocarbons is crumbling.

In previous years, however, the supporters of the East Med project didn’t even hesitate to use “environmental arguments” to make their case, saying that natural gas would be the transition from oil to renewable energy sources. Their arguments, however, were not lacking in nationalist rhetoric, accusing environmental activists that denying the need for extractions equals treason. They even went so far as to accuse some of the activists of being Turkish agents.

The discussion that followed also highlighted other important aspects of the issue, ranging from the privatisation of the energy market and energy poverty to the destructive way in which industrial-scale renewable energy is being promoted in different parts of the country – and the movements that are being built against it.

One of the highlights of the event was the intervention from journalist Tasos Sarantis (working for Efimerida Syntakton-EFSYN), who is being prosecuted for his reportage on the lawsuits against those resisting the construction of wind turbines in the city of Monemvasia. Specifically, he described how the company WRE HELLAS filed a €225,000 lawsuit against him and EFSYN for “inciting the residents of the area”. He also mentioned the lawsuit pending against one hundred (!) activists fighting the environmentally destructive installation of wind turbines in the island of Tinos. He also referred to the lawsuit against the Alterthess journalist Stavroula Poulimeni from whom the company “Ellinikos Xrysos” (subsidiary of the Canadian Eldorado Gold) is claiming €100,000 for “leaking personal data”, because she reported the conviction of two of its CEO’s for breaking environmental law.

The discussion was moderated by Emmanouela Terzopoulou from the Movement for the Protection and Promotion of the Great Rafina Stream. People who also spoke were Vassilis Chlis from the #SaveTinos initiative, Despina Spanoudi from the Panhellenic Network of Collectivities for Energy, Yannis Sifakakis from the Initiative Against Environmental Destruction and Climate Change, Kostas Papakostas from Podoniftis- Current of Critique of the Times and Action, while a representative of the Spartakos Network addressed the meeting.

On behalf of Xekinima, Eleni Mitsou referred to the serious environmental risks posed by hydrocarbon extractions in the geographically closed off Mediterranean Sea, whose waters require at least 80 years to be fully renewed and is, more importantly, a well-known biodiversity hot spot. A potential accident, or even minor leakages (which occur in all extraction installations in land and sea, whether oil or gas) would evoke huge risks for the natural habitat of the region and the local population.

A common thread, among all those who participated in the event, was the necessity to continue building links between the environmental and anti-war movements and organisations in the region, in order to jointly address any threats that may arise in the coming period. In this bleak landscape of constant attacks on human rights and living standards as well as ruling class competition and nationalism, the cooperation between these movements can be a source of hope and inspiration for the region’s workers and youth.