Don’t Dig meeting in Istanbul: fighting together against fossil fuel catastrophe and war 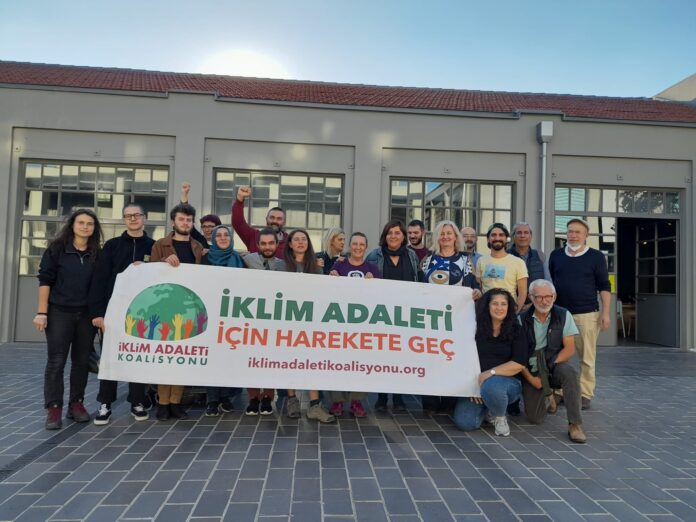 We publish a report from the Kazma Birak / Μας σκάβουν τον λάκκο / Don’t Dig campaign meeting in Istanbul. You can read the press release here

On October 31st and November 1st, Kazma Βirak, the Turkish coordination of the common campaign against extractions and war in Greece, Cyprus and Turkey, organised a 2-day conference in Istanbul. It was a very successful event that marked the determination of all participants to continue and advance this struggle.

Most of the participants were representing organisations, groups and collectives.

Five members of the campaign, from Turkey, Greece and Cyprus, presented the situation that we are facing in each country and in the Aegean and Eastern Mediterranean Seas, concerning gas drillings and the danger of war.

The energy crisis is actually creating new challenges for working people in all our countries, but also changes in the developments around gas drillings in our area. Even though the fossil gas is still in the ground in the Greek and Cypriot Exclusive Economic Zones (EEZs), the energy crisis is providing new incentives for the ruling classes for the exploration and exploitation of oil and gas fields as well as the building of LNG terminals and gas pipelines that in the previous period were put on hold. All these projects are once again, of course, presented as of major national importance.

Therefore, projects that big fossil fuel companies appeared to have abandoned, are most likely to be revived. Apart from the fossil fuel fields discovered in Eastern Mediterranean, similar efforts are made south of Crete and in West Greece. East Med, the pipeline that is planned to link Israel to Cyprus, Crete, mainland Greece and the rest of Europe, is for the time being only on paper, but there is a discussion about whether it will go through or if alternative routes will be chosen, depending on shifting alliances and interests.

The quest of the EU to differentiate the source of gas supplies and not be dependent on Russian exports, turn Greece, Turkey and Cyprus into important players. LNG terminals are planned to be built in Alexandroupolis and Volos in Greece, areas that are already environmentally degraded by other industrial units. LNG terminals are also planned in Turkey.

The destruction of the environment from extractions and pipelines and the possibilities of accidents detrimental to the environment are not being taken into account, even though the areas of exploration are earthquake-prone. Nor is the impact they will have on local economies, which are highly dependent on tourism and fishing.

The “European Green New Deal” and the so-called green transition planned by the EU, have clearly proved a facade, as EU capitalists turn back to fossil fuels and even coal and nuclear energy. Their “green” turn was relevant only as long as it was profitable for their greedy pockets and as long as they didn’t have other priorities, like fighting Russia.

The tensions between Greece and Turkey, that were on low levels during the past years, have been revived and intensified from the time that Cyprus started the exploration for fossil gas in its EEZ. During the past two years it escalated rapidly. EastMed and the agreements that were signed after each contract with the big oil and gas multinationals, did not take into consideration Turkey’s interests.

However, it was naive to believe that this would go answered by the Turkish regime, or even worse that the fossil gas found could be a catalyst for peace, as the Greek and Greek Cypriot side was claiming!

On the contrary, we see the three countries in a new arms race, and military incidents occurring more often than before. None of the three ruling classes, nor the big imperialist powers, want an all-out war. But the question is, can they contain the conflict? We cannot base our hopes on that perspective.

With elections approaching in Turkey, but also in Greece and south Cyprus, the nationalistic rhetoric and tensions are on the rise.

Kazma Birak is a valuable campaign in this direction. During the last two years, movements and environmental organisations in Turkey, Greece and Cyprus, have taken action against war and extractions. They also created bridges of solidarity between similar movements in the three countries.

The discussion in the conference was very rich, with representatives of movements presenting their experience, and bringing forward ideas on how the collaboration can be extended: from the LNG terminal in Alexandroupoli, Greece, and the protection of the nearby gulf of Saros in Turkey, to the struggle against industrial wind farms on both sides of the Aegean. From the battles against gas and coal in Romania, to the environmental struggles against hydroelectric power stations in the Black Sea.

The reality is that we need to oppose disaster capitalism that is responsible for pandemics, poverty, climate disaster and wars, extend our solidarity and organise common struggles. At the same time, we should describe the alternative we are fighting for.

On the second day, the members of Kazma Birak participated in an internal discussion about how the campaign can move forward. There was an interesting exchange of opinions that led to some concrete proposals on how to get organised and how to act in the next period. These ideas will be taken back to the national coordinations of the campaign, to be discussed and decided upon.

It was a very important meeting of the Kazma Birak campaign. After two years of organising together mainly via zoom and social media, this conference was the second one, after the meeting in Athens last May, for members of environmental movements to have the opportunity to meet and discuss in person.

The meeting took place after the 3rd People’s Climate Agreement conference, held on October 28-30, in which Kazma Birak members also participated and got to meet environmental activists from all over Turkey. We got inspired by their struggles which take place under the hardline repressive Turkish regime. After the Kazma Birak meeting, there was also a conference on Ecocide.

Both events took place in an old gas factory, the Gazhane museum, which was transformed into a public space after years of struggle from the local movements. The residents of the area managed to force the state to give it to the municipality, and in collaboration with the technical university of Istanbul to refurbish it. Now it is an open space that everyone can make use of. It includes a museum of energy, a museum of climate change, galleries, a library, a cinema, a bookshop and a big amphitheater that are open for use to any collective.

The movements that met in this series of conferences renewed their determination and vision that with collective struggle and solidarity there is a way forward in our struggle against environmental destruction and against the dangers of war between our countries.