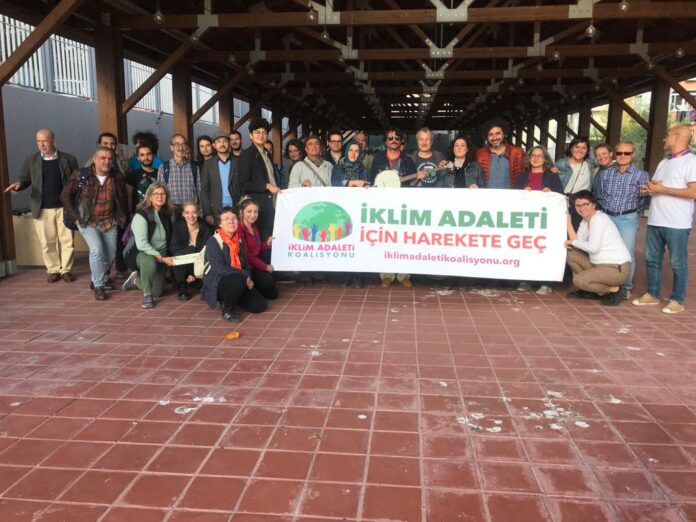 We publish the joint final statement of the Peoples’ Climate Agreement conference that was held in Istanbul on October 28-30, with the participation of an important number of activists and ecological organisations from Turkey and other countries. The conference was organised by the Climate Justice Coalition Turkey.

Engels made one of the  best definitions of capitalist exploitation in 1845, when he used the expression ”social murder”. With this definition, he was referring to the capitalist order as a serial killer system that was driving thousands of workers slowly towards death.  We can regard the climate crisis as another form of social murder. Engels’ close friend Marx saw the destructive tendencies in capitalist development, that the forces of production turned into forces of destruction and that only another force from outside those relations  could stop capitalist ruin. Today, however, this destruction has gone beyond murder to become annihilation. The climate crisis is not an isolated phenomenon. We live in an age of capitalist crises and we face a capitalist class that is trying to turn these crises into opportunities. Rather than looking at the melting polar ice as disaster, they wanted to exploit it as an opportunity to find the fossil fuels hidden under the ice and open new sea routes for trade. Capital’s answer to the climate crisis is to create new crises – the fanning of the flames of exploitation, racism and wars.

If we look at the struggle of climate activists for the last 50 years in this context  we can see that the alternative summits have not held the official summits sufficiently to account. The ecological struggle that began in 1972 was adopted by capital as “sustainable development”. However, we must reject history as rewritten and enforced by capital to conform with its own interests. We should not accept the reduction of nature to numerical measures like carbon accounting and target dates, instead focussing our relationship with nature on values. The climate change movement must be organised without division into sectors, with a holistic understanding. It must be in solidarity with class, regional, ethnic and other social movements. It must understand the importance of the class struggle. There must be no separation between working class struggle and the ecological struggle.

While we oppose the COP meetings organised by the United Nations, we use the scientific reports prepared by these institutions and the COP meetings ensure the possibility of opposition actions. The important things here is to determine how to develop an alternative perspective and struggle against the capitalist perspective. On the other hand capitalism has the power to make all opposition actions appear banal. Our alternative perspective should not simply be the expression of a reaction to the situation, but make concrete proposals. If our claim is that we will found a new way of life, the way to do this will not be only through losing time by simply reacting to capitalism. Rather, we need to evolve towards uniting all the different struggles. Further, everything should not be reduced to the concept of climate crisis. We need to make clear the connections to wars, the commoditisation of water resources, regional differences, deforestation, the spreading networks of commodity exchange, depopulation of living areas, cultural memory that we have failed to protect. We are not only affected by the climate crisis, but by a spiral of many interconnected problems. We need to use an Ecological-Political approach for an effective struggle against capitalism. Each one of us must interrogate their responsibility in the climate crisis and ecological destruction and ask themselves, “Will we still continue to think within the system?” We cannot waste time on divisions or allow our movement to be dispersed, we have to discuss how to pursue an organised struggle.

One of our duties is the democratisation of knowledge. We have access to a wide range of sources and we we need to interpret this information from the point of view of working people. The climate struggle needs to be transformed into struggle for the right to live.

The situation regarding public health is very worrying. The climate is more and more suitable for the spread of infectious diseases. In 2010 the estimated number of climate refugees was 21,5 million, and this is expected to rise to 1.2 billion by 2050. In addition to tens of other results of the climate crisis, there is an important rise in mental health problems. Access to food is being restricted. As the Lancet’s health report put it, “public health has been abandoned to the tender mercies of the fossil fuel lobby.” In the field of public health what is needed is to achieve social policies that put public interest first in every area – from energy to agriculture to health care. Also need is risk analysis and  disaster planning in every sector, ensuring co-ordination between sectors.

The progress of deforestation in Turkey is very worrying. Since 1992 the level of tree planting has diminished greatly. In the last 20 years the total amount of reforestation only amounts to 3% of the total forest. In the recent period the amounts of forest lost to the 2B protocol (which allow forest that has “lost its character” to be used for development) to mining, tourism, road construction has exceeded the extend of replanting. The average annual loss of forest to fire is 9,705 hectares, while the annual loss to developments claimed to be in the public interest is 37,869 hectares. Appendix 16 of the Forestry Directive gives the President of the Republic the authority to issue an ordinance cancelling the designation as forest for any area of forest that is suitable for development.  In addition, there is a risk that the production of wood from forests as a cheap raw material will bring forest to the point of collapse. In 2005 annual wood production was 13 million cubic metres, which has now risen to 32 million cubic metres. Despite these very discouraging figures, the level of fightback to protect the forest is rising. However, these struggles to protect forests remain restricted to local actions. These have not yet been able to evolve into a united struggle to protect nature. We need to work to find ways to achieve this.

Closing down coal fired power stations has to be one of our first priorities, both in order to reduce greenhouse emissions and also to reduce local pollution. Between 1965 and 2020 coal fired power stations have been responsible for 200,000  premature deaths. These power stations are causing depopulation in rural areas, while those who are trying to continue to produce food are dispossessed, as they were at Soma, for example. The peasant population is being proletarianised, the relationship between people and nature is being disrupted. One of our duties, while campaigning to closed down these thermal power stations, is to guarantee the futures of the 45,000 workers in the coal sector. We have to find a way to organise together with these workers.

The campaigning of the Turkey Climate Justice Coalition throughout 2022 through the local caravans included  efforts to make ecocide a crime, and the call to close down coal fired power stations.

The first caravan, with participation from Ireland and Portugal, aimed to overcome national borders and make ecological destruction visible. The caravan in Turkey did not remain a one-off and become a whole series of caravans. The first caravan started from Akbelen, whose struggle for a coal-free Muğla has a symbolic place in the ecological struggle in Turkey. Subsequent caravans provided the opportunity to talk about regional problems in the context of the climate crisis. The central slogan of the caravans was “We are the solution” and throughout their journeys were able to bring subjects to the table such as the destruction caused by coal fired power stations, the government orders weakening the laws protecting olive orchards, the widespread damage caused by geothermal power stations, the excessive amount of deforestation, and other ecological problems.

A series of actions were carried out including the campaign to close coal fired power stations, preparation of questions to be asked in parliament, organising workshops, creating a position paper, the climate justice caravans and the opening of court cases.

The working group for the recognition of ecocide as a crime is making efforts to have widespread and long term damage to the environment made punishable by law and will host an international conference on this subject on 3-4 November. The Sea of Marmara in Turkey is a prime example of an ecocide crime scene. While the constitution and laws of Turkey do not yet recognise ecocide as a crime, it appears that some European countries are preparing to do so.

In order for the ecological struggle to spread and to find mass support in the desperate situation we are now in, practical and concrete suggestions should be made, especially on energy. Instead of saying no to all types of energy, we should advocate wind and solar energies, without allowing them to cause natural destruction and minimizing their carbon footprints. On the other hand, we should oppose energy operated with an industrial or capitalist approach, take into account who the technology serves, and discuss how the energy will be consumed.

The capitalist system we live under does not operate in accord with the real needs of people. Moreover, while defending the interests of capital, capitalism manages to pretend that there is a distinction between the demands of the general public and workers and those of ecologists. The same system that produces ecological crises, also exposes workers to economic crisis. As defenders of nature and life, we must be aware of these and face the concrete realities of life, join hands with the workers that capitalism tries to pit us against, and search for ways to produce solutions together.