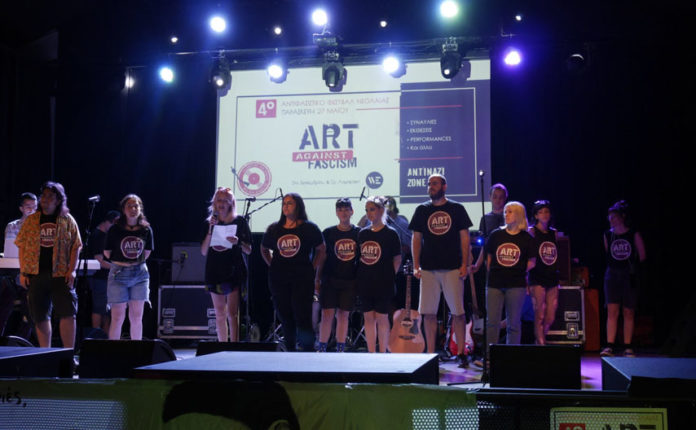 Statement by the 4th Art Against Fascism organising team

After a 2-year imposed absence due to the pandemic, the 4th Art Against Fascism festival in Thessaloniki took place on May 27 at the WE venue. It indeed managed to boost the morale of all those who took part in it.

Various artistic performances, short speeches and of course concerts attracted the interest of the 500 people who attended. However, what stood out most of all was the atmosphere. It was an atmosphere of free expression, of combative mood against the fascists, of solidarity – those were the dominant features of the festival.

This atmosphere prompted many new people to express an interest in actively taking part in the struggle against fascism and to leave their contact details.

The event started with performances, followed by short theatre plays and then a concert by a wide spectrum of bands of pupils, students or young workers. They did raise our spirits with their energetic presence.

We want to thank all the individuals, groups and bands who participated and therefore supported the struggle against fascism in their way, and in particular:

We should also not forget to mention the important role of the volunteers both in the preparation of the festival, in taking shifts in the bar, kitchen and running the venue that day.

Those of us who went through the 4th Art Against Fascism experience are left with renewed courage, uplifted morale and optimism for the anti-fascist battles to come!

A clear message was sent by the short speeches given by members of the organising team at the beginning of the event and in the course of the evening. They referred to topics such as the fascist attacks in West Thessaloniki, the recent events of repression at the Aristotle University of Thessaloniki and the attempt to impose a University Police Force, women’s struggles, the battle against homophobia and the trial of Zak Kostopoulos murderers, the developments in the struggle against the fascists and the far right, etc.

It is worth mentioning the difficult conditions in which the festival took place, with the city of Thessaloniki being in essence under police siege for the last few days. On the day of the festival, from the early morning hours, police forces and riot police, together with a water cannon, had a constant presence in the area of the Aristotle University of Thessaloniki. That happened only a day after the serious injury of a student by a police flash grenade.

At the time of the festival, we received information from people joining, that strong police Special Forces were around the university campus and the WE venue which is close to it. Uniformed police officers were conducting ID checks and searching bags of by-passers, as well as conducting full body checks, creating an atmosphere of terror. It was a proof that the government continues its strategy of tension and provocations.

Police were choosing who to check clearly judging by the looks and age.

The threat of fascism is real and to counter it we need to organise in every school, in every neighbourhood. That was the key message dominating the conversations inside and outside the festival. And that is what we are determined to do.

We already started to organise the next Art Against Fascism, as well as a series of events that will take place during the coming year.

We will continue to be present in all the small and big daily struggles.

The next important Antinazi Zone action will be the 29th anti-fascist summer camp, which will take place in Kefallonia, from July 29 to August 7, and will include discussions, concerts, a self-managed bar and kitchen, screenings, parties, workshops, events for children, excursions etc.

As Pavlos Fyssas used to say in one of his songs “For those who betrayed me with back stabs, I want them to know that, I will not cry… I will not be afraid”. That’s exactly what we intend to do, take to the streets and fight!