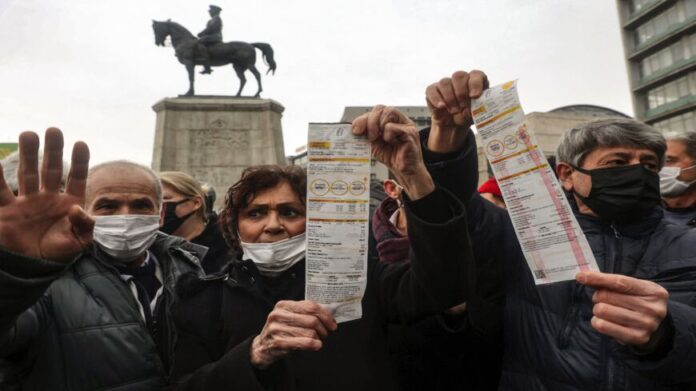 Astronomical electricity bills this month shocked the people of Turkey and led to spontaneous protests.

The government increased the price of electricity by 52% for a consumption of 150 kwh (kilowatt hour) per month, and 127% for consumption above this threshold. Although after the protests the regime took a step back by increasing the threshold to 210 khw, this is far from being satisfactory for large sections of the population suffering from the high cost of living. It is expected that the regime will probably take another step back as they have had their backs against the wall for a long time now and cannot endure much pressure.

Today in Turkey the consequences of the crisis in the economy have spread to every aspect of life. The rise in electricity bills in recent months, contributes in further deepening the impoverishment of the people. As a result, some small shopkeepers hung their electricity bills on the windows, some cafes began to demand extra fees for turning the heat on, and some cafes started using candles for lighting. Even well-known celebrities, who do not face financial difficulties themselves, reacted on social media- a sign of the widespread anger that was created.

Protests about rising electricity bills quickly spread all over the country. People took to the streets in Ağrı province, the shopkeepers in Bursa province turned off their lights between 21:00 and 22:00 and various protests were also held in Şanlıurfa, Muğla, Şırnak, Mardin, İzmir and Gaziantep provinces. Electricity bills were burned as a part of the protests in Gaziantep, and people were holding signs saying “we cannot make a living, we want a human life”.

Speaking in a press conference, Textile Weaving and Leather Workers Union (BIRTEK-SEN) Chairman Mehmet Türkmen said that the price hikes in fuel are not only a problem for those who have a car, but for everybody, as they will increase costs in transportation and will create a new wave of price hikes. Hami Torcu, the President of İzmir Gastronomy Food and Beverage Clubs Association, stated that electricity and natural gas bills sometimes exceed the rent they have to pay and they should be withdrawn.

The anger against the electricity price hikes is of course linked to the despair about the impoverishment the people of Turkey have faced in the recent period. The general world crisis of capitalism, Turkish economy’s chronic problems, and the economic policy decisions of the Erdogan regime have contributed to drawing Turkey into a crisis with breath-taking rises in inflation and poverty.

In the midst of this price hike wave, the ruling class is trying to put the burden of the crisis on the working class. Even the official inflation rate of 48.69%, published by the statistics agency TUIK, is far from reality. The real inflation is above 100%, based on the calculations of independent economists. Despite this, the bourgeoisie is reluctant to accept measures to cushion the effects even of the 48.69% inflation. The working class did not accept the insufficient rises and took action in various sectors. This led to a minimum wage increase of 50%. But the wage increases disappeared before they even reach the pockets of the workers because of the electricity and other price hikes.

Another reason for the increase in electricity bills is undoubtedly the privatisations in the energy sector.

Electricity is an essential and basic need of society and should be a public service because of this. It is an essential necessity for the continuity of everyday life and it is not an individual’s choice whether or not to receive that service- like some goods in the market. It is not possible to choose freely among many electricity service providers either. People have to buy the electricity offered to them in their region, at the tariff it is offered.

Keeping the profits of the energy sector corporations definitely has played a role in the recent power cuts and price hikes.

The electricity price hikes should be taken back as soon as possible. It should not be forgotten that electricity is an energy source used in every sector, and such an increase will raise costs in all sectors. This will of course further fuel inflation.

Energy is a fundamental right and an essential need of society. The popular layers should be provided with the amount of energy that they need at a price they can manage.

The energy sector should be re-nationalised under workers’ control and management, in order to ensure all of the above.

Share
Facebook
Twitter
WhatsApp
Viber
Email
Previous articleAustralia’s nurses strike: Breaking the silence and getting into action after a decade
Next articlePortugal: Debates around the campaign to “normalize” the far-right Chega- article by Semear O Futuro