Australia’s nurses strike: Breaking the silence and getting into action after a decade 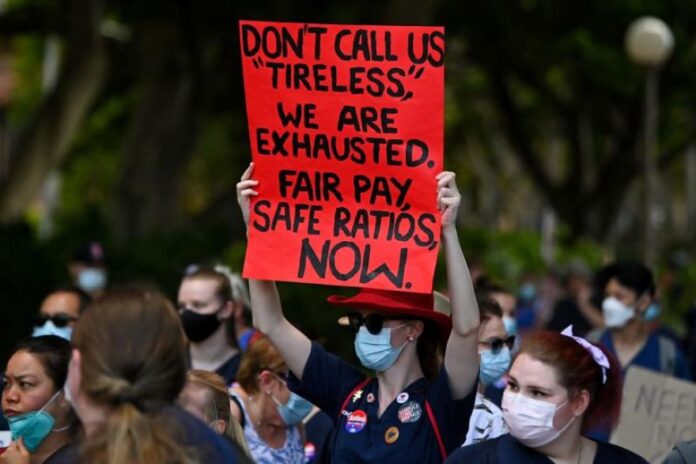 After 10 years of strike inactivity, the nurses of Australia have stepped into the arena and have initiated a campaign to improve the nurse-to-patient ratio and increase their wages. Between 6,000 and 10,000 nurses from 150 hospitals and community centres across New South Wales (NSW) walked off the job on Tuesday, February 15th, and had a massive demonstration in front of the Parliament House in Sydney.

For over two years now, the healthcare workers have been tirelessly working throughout the pandemic. But unfortunately, the only reward they have been receiving is the title of “heroes”. On Tuesday, the nurses – with their clenched fists and angry roars – warned the authorities that “kind words are not enough”. They want change.

The Premier of NSW, Dominic Perrottet, blamed the nurses for being “negative” in these difficult times and preached them to “be positive”. This is part of an attempt to cover up capitalism’s systemic flaws and reduce the problems to the level of “personal responsibility”.

Since the outbreak of the pandemic, the health systems worldwide have shown their inability to cope to this crisis. Even in a country like Australia, that experienced a minimal effect of the pandemic until a few months ago, the health system came at the brink of falling apart with the Omicron variant outbreak, as it was unprepared for such an influx in hospitalizations. Except some big metropolitan hospitals, most rural areas do not have enough resources, including nurses, to deal with the recent upsurge.

In the last few decades, all state or federal governments neglected the health system because it was not profitable. They have been coordinating a gradual transition from a public health system to a health system dominated by the private sector. They are following the American model, which has clearly proven its incapability, especially during this pandemic. As usual, only the most vulnerable layers of society and the “heroes with a positive attitude” are called to pay the price.

How can somebody remain “positive”?

How can the nurses remain positive whilst facing the most horrendous and bitter conditions? When they cannot provide dignified care for critical unit patients, even at their last hour?

How can the nurses be positive when the only available personnel to look after 28 (!) critical Covid-19 patients are one registered nurse, two enrolled nurses and one nursing assistant?

The physical strain and, even more importantly, the psychological pressure and the ethical dilemmas force the nurses to quit their jobs or fall into deep depression and stress. Eleven ICU nurses resigned in less than three months in just one hospital of the area.

The Nurses’ Association was forced to call for a strike. A majority of nurses voted to strike and forced the union out of its comfort zone. Nevertheless, the strike was deemed illegal by the Industrial Relation Commission (IRC). The Health Minister, Brad Hazzard, went even further and threated that there could be disciplinary action on those who protested after the IRC ruled a ban on strikes by the union for one month.

How can anyone trust a government when its policies put the safety and health of the patients and the healthcare workers far down in its list of priorities? The brazen Health Minister of this system, Brad Hazzard, was “disappointed” at the nurses’ “illegal” strike and described it as “unfortunate”. He said the government is willing to negotiate a 2.5% pay rise. They may reach an agreement with the union leadership on this. But Australia’s latest reported inflation rate was 3.5%, compared to 3.0% for the previous quarter.

But they don’t even consider about any improvement in the staff-to-patient ratio. “It would cost the NSW taxpayers $1 billion dollars” is their excuse. At the same time, as the media report:

The problems health services face worldwide are more or less the same – obviously the situation is worse than Australia in many countries. After all, Australia is on of the most developed economies in the world. Improvement is not cost-effective, “it costs millions”, whilst the big pharmaceutical companies bag billions from the masses’ misery and death.

Just to mention only two examples:

“The market has experienced significant growth during the past two decades, and pharma revenues worldwide totalled 1.27 trillion U.S. dollars in 2020.”

The struggle has just begun

The statistics clearly expose the hypocrisy of all capitalist governments. None of them can or event wants to make any substantial changes in the economic and social conditions. The capitalist crisis continues from 2008, has been deepened by the pandemic, and will continue. However, the people are not the same as before. Workers have instinctively felt that all governments in the current global system just serve and protect the big companies and banks. There were important struggles in the last years, just to name a few: the workers in France; the Black Lives Matter movement in the US; the protests of workers, teachers, women and pensioners in Iran; and many more. They have tried to make the ground for governments shaky.

The nascent rumblings within the Australian labour movement, shown particularly with the teachers and nurses protests and strikes are a reflection of this global shift.

As one of the speakers at the nurses’ rally said: their struggle just begun, this is not the end of it.