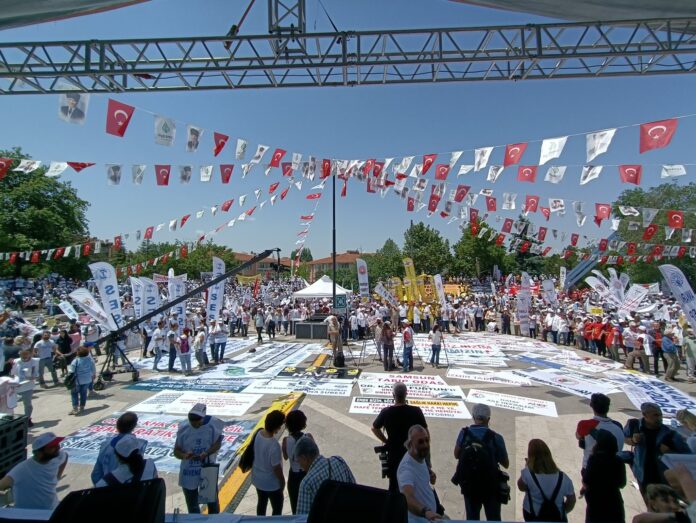 Healthcare professionals took to the streets again on May 29, adding another action to the ones they have been carrying out throughout the last year. In addition to the various organizations and unions that physicians are members of (dentists, radiology technicians, nurses, etc) social workers and pharmacists also attended the rally organized under the slogan “Our Labor, Our Word, Our Health”. Citizens were also invited to attend this rally to protest about their right to a decent health system. The approach for a joint struggle was crucial, as it reminds us that the health and well-being of healthcare professionals and patients are interconnected. As a matter of fact, the slogan “we want to live and support the lives of patients”, chanted during the rally, describes this in the best way. According to Turkish Medical Association (TTB) records, more than 1,000 physicians are forced to migrate every year! This figure clearly reveals that people must support the rights of physicians, in order to have access to basic health care.

The rally was very successful as it was attended by approximately 5,000 people! Healthcare professionals and citizens from all over Turkey protested, each from their own side, about the repercussions of the multiple crises in the health sector.

Obviously, the crisis in the health sector is part of the generalized crisis of Turkish capitalism. The rally echoed demands and slogans of many different groups, from those who fight for an eco-socialist society, to those who advocate the holistic approach according to which nature, animals and people are handled as a whole, from medical students to public sector unions.

Signatures were also collected under the 10-point text of urgent demands put forward by the TTB Central Council. These are:

1. Preventive health services should form the basis of the health system!

2. There is no health care in five minutes!

Appropriate working conditions should be provided to enable physicians to devote sufficient time to their patients. The number of physicians and health care workers per population should be brought to a necessary and sufficient level for qualified health care.

Corporate hospitals must be abandoned. Even secondary healthcare services should be provided in public and university hospitals structured in accordance with science and public health.

4. The budget allocated to health should be increased!

Health should be free for everyone, physicians should be rewarded for their hard work.

5. An effective law to stop violence in the health sector must be enacted!

Work areas should be free from violence and safe.

6. COVID-19 should be counted as an occupational disease for healthcare professionals!

The occupational disease law should be enacted without any preconditions, and 120 days of depreciation should be granted to all healthcare workers for each year worked during the pandemic.

7. The responsibility for the deficiencies of the health system cannot be transferred to the health workers!

Losses of patients and damages arising from health services should be undertaken by the public sector; compensation to be paid should be done so immediately.

8. The pressure on physicians must end!

Repressive practices such as the Family Medicine Penal Code, mobbing, statutory decree, archive scanning and security investigation should be abandoned.

9. Quality should be a priority in medicine and medical specialization training!

Medical education and specialty education in medicine should be made in accordance with qualified, international standards with the recommendations of experts and the unions of professionals. The opening of a large number of medical faculties without any investment in facilities, ect, should be abandoned, and quality should be the priority.

10. Obstacles put forward against physicians’ organizations and the struggle to defend their rights should be removed!

The targeting of physicians’ organizations, especially the Turkish Medical Association, must be stopped.

The mobilization was particularly important, because it took place in the capital, Ankara. Especially after the June 7, 2015 elections, when the ruling party AKP failed to gather enough votes to form a government by itself, serious restrictions were imposed on demonstrations and marches in Ankara. After the events surrounding the attempted coup in 2016, these pressures increased. As a matter of fact, health professional organizations and trade unions were prevented from holding rallies in large squares and places relatively open to the public. Despite all this, health workers continued with determination their actions, and this was another reason for the enthusiasm that was evident at the rally.