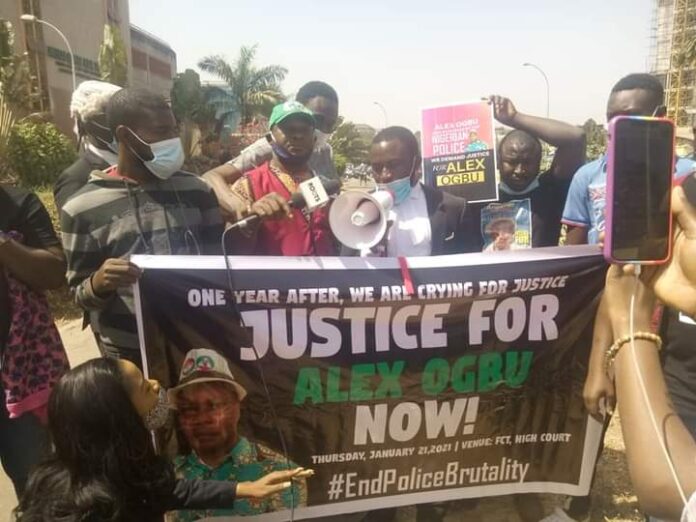 Comrade Alex Ogbu, a journalist, trade unionist and human rights activist was felled by police bullet on January 21, 2020, at Berger Roundabout, Wuse, Abuja. The incident happened during a brutal police crackdown on protesters calling for the release of leader of the Islamic Movement in Nigeria, Ibrahim El-Zakzaky.

Ogbu was doing his job as a journalist, reporting on the demonstration when he was gunned down. Initially, the police claimed that he died because he fell down and hit his head, but then it was revealed that he was actually shot in the head by a senior police officer. Many civil society groups and social movements condemned the gruesome killing.

The autopsy revealed that the cause of death was blood loss resulting from gunshot injuries. The police authorities refused to carry out the coroner’s inquest. This was in an attempt to cover the police officer that killed our comrade. Since then, with the support of Femi Falana (SAN), a lawyer and human rights activist, we sued the police and the federal government in the Federal High Court. At the court we called for the prosecution of the officers responsible for the dastardly act and an appropriate compensation for the dependents (especially a scholarship for his then two-year old daughter). Because of the neo colonial nature of the Nigeria judiciary and the snail judiciary system, the court has not yet reached a verdict.

Unfortunately, the case has suffered series of adjournments due to the way cases of ordinary people are being handled in the country. It took the Anthony General Federation (AGF) almost a year to file the defense of the respondents. Three judges have sat on the matter and we’ve suffered over 10 long adjournments. But we’re committed to fighting the matter until a final victory.

The death of Alex Ogbu has left unimaginable pain to his loving family and comrades, whose world has been turned upside down. Amidst their pain, Alex’s devoted family and comrades have found the strength to appeal publicly for Nigerians to join them to fight for justice. They remain absolutely steadfast in their determination to bring the killer to justice and get the appropriate compensation.

All those who want to see an end to police violence against armless Nigerians have to redouble their efforts.

They must organise and demand:

-End police brutality now and all form of police harassment and abuse of democratic rights.

-For the right to protest and an end to shooting of protesters by policemen!

-End all roadblocks and check-points designed for illegal extortion.

-Adequate compensation for the families of the victims of police brutality.

-For the right of the policemen and women to have a Police Union.

-Heavy penalties for all officials who have committed crimes against demonstrators and other citizens!

The police are the guardians of the capitalist system- fight for a socialist society where everybody can live without exploitation, oppression, poverty and injustice!

In the Trade Union Congress of Nigeria (TUC) new year message, its president Comrade Festus Osifo stated that Nigerians have faced various calamities and challenges in the last few years, with the situation unbaiting.

“Sadly, Nigerians ended the year with another unnecessary death; that of Mrs Omobolanle Raheem, a pregnant lawyer whose promising life was eclipsed on Christmas Day by a trigger-happy police officer. This is an important development there is need for a stakeholder to take up the police brutality.”

According to Comrade Gbenga Komolafe, the General Secretary of the Federation of Informal Workers Organisation of Nigeria (FIWON)

“The point is that the Nigeria Police Force is a creation of British colonialism. It is a brutal force employed to kill, steal and destroy. They were the enablers of colonial plunder, suppression, oppression, humiliation and destruction of the ‘native’; not just his person but his culture and essence.” He continues that “The neo-colonial police have not been refined by the fact of nominal flag independence since 1960. Rather, they have perfected their new roles as enforcers of suppression of popular anger and protests against the new plunderers in black skin”

Mr Omoyele Sowore, the present Presidential Candidate of African Action Congress (AAC) is also a police brutality victim. He was arrested and tortured by the police, and consequently he made himself available in all court sittings and political activities to get justice for the comrades and families of those left behind. He has said the process of recruiting policemen goes a long way in shaping how police officers behave. He said that the process must be well discussed if the country is to tackle police brutality. He went further to say that the

“Police reform is personal to me. I have been a victim of police brutality since my days at the university. To reform the police, the issue of police recruitment must be attacked. There is no regulation to how police are being recruited and the results are questionable characters and unqualified men in uniform,”

on Saturday in an interview with Fresh FM.

We also fight for justice for the killing of 41-year-old pregnant female lawyer, Omobolanle Raheem, in the Ajah area of Lagos, by an Assistant Superintendent of Police, Drambi Vandi, on December 25, 2022. The Ajiwe police station is notorious for killing civilians. A young man has also been killed by a police officer in the same police station on December 6, 2022.

These recent events bring to mind the #EndSARS revolt in 2020, when Nigerian youth gathered in their pains and agony to staged protests across the country to demand an end to the defunct police unit, Special Anti-Robbery Squad (SARS). But since then police brutality seems to have risen even more.

Section 4 of the Police Act, Cap 359, Laws of the Federation of Nigeria 1990 provides that:

“The police shall be employed for the prevention and detection of crime, the apprehension of offenders, the preservation of law and order, the protection of life and property and the due enforcement of all laws and regulations with which they are directly charged and shall perform such military duties within or outside Nigeria as may be required by them, or under the authority of this or any other Act”.

What we have today is the total opposite. Rather than carrying out its duties of protecting lives, the police kills innocent and defenseless Nigerians with police bullets bought with taxes of those killed. At the same time, it protects the oligarchs, the capitalists, the super-rich and the corrupt elite.

We call for justice for all victims of police brutality.

Justice for the killing of our comrade Alex Ogbu.

The next court hearing is February 15 at FCT court in Kurudu , Abuja.

We will remain undaunted until total victory.