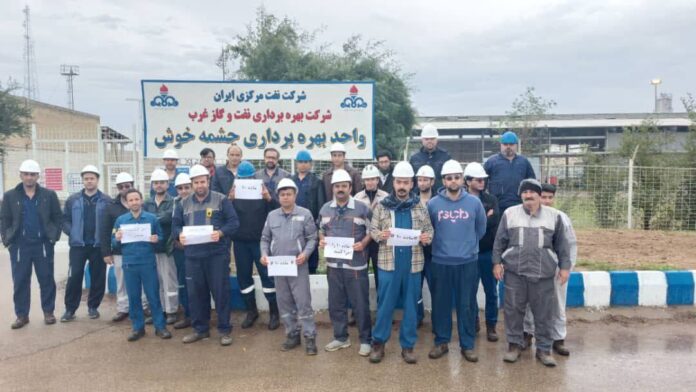 On January 17th, the official workforce of Iran’s oil industry protested at many facilities, demanding higher wages, bonuses and other benefits.

The official staff of the oil industry demanded the “implementation of Article 10 of the Law on the Duties and Powers of the Oil Ministry”. Approved in 2012, this law deals with the duties and powers of the Oil Ministry and its subsidiaries. Article 10 of the law sets out the wages and benefits of “the Oil Ministry’s subsidiary companies’ employees” who “work in operational and specialised units”. This article is supposed to improve the capacity and competitiveness of these companies, thus speeding up the development of joint fields and help with the retention of the specialised workforce. It is also supposed to bring the employment conditions and status of these workers up to international standards.

The protesting workers’ full set of demands were:

1. Full implementation of Article 10 of the Law on the Duties and Powers of the Oil Ministry.
2. Improvement of pay scales in Article 10 in line with current inflation, so that regardless of their situation, all employees can benefit from it.
3. Payment of ten years’ backpay, in accordance with Article 10.
4. Improvement of the Oil Ministry’s health services.
5. Full payment of retirement bonuses, as paid by the Oil Ministry in the past.
6. Take care of oil industry pensioners and improve the lives of these seniors.
7. Timely adjustment of staff qualifications, making adjustments easier.
8. Classification of staff posts.
9. Address the chaotic and worrying situation of the oil pension fund and amend its statutes.

The Co-ordination and Solidarity Council of the Oil Industry’s Official Workforce issued a statement urging workers and personnel of other oil industry sectors – including petrochemicals and tanker transportation, whether official or contract workers – to join the struggle.