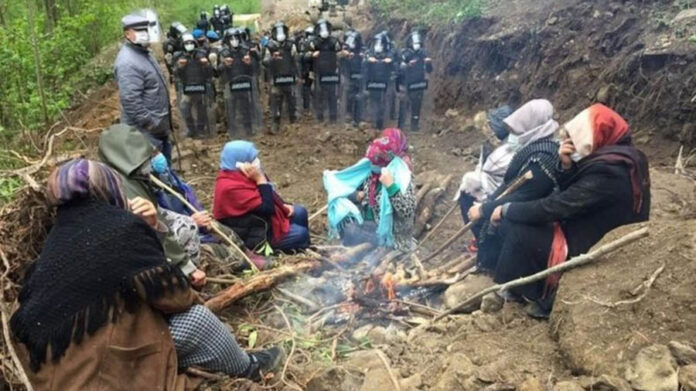 During the Kazma Birak meeting that took place in Istanbul, in the beginning of November, we met Asli Kahraman Eren, a woman activist, member of the Ikizdere Federation of Associations (Ikizdere dernekler federasyonu) and Ikizdere Environment Association (Ecological birligi). Asli is taking part in the resistance developing in the Ikizdere village, against the hydroelectric power station and more recently against the quarry of Gengiz Holdings.

The struggle taking place in Ikizdere became widely known in Turkey after the publication of photographs showing dozens of Gandarma men (police special forces) blocking a protest of around 50, mainly local women, that where demonstrating against the quarry.

Q: Asli, due to the current energy crisis, there is a heated discussion around renewable energy sources. You live in an area where the rivers can be used to produce energy. What is your experience?

A: In the Rize region of the Black Sea, many rivers, created by the melting of the mountain glaciers, flow towards the sea. The tractive force of the water is so immense that the Turkish government decided it could be a good source of power.

So, the construction of hydroelectric dams started 15 years ago. These dams divert the flow of the river to the power plant, and as a result the valleys have dried up. One of the most important valleys in the world, Iskencedere Valley is facing an existential threat.

The water is of huge significance to the region. But the last two years Iskencedere river has no water, which means that people and animals are suffering.

The environmental struggle in the area against the dams started 15 years ago. Today there is no location in the Black Sea area that does not have a hydroelectric dam. In most areas they succeeded in building dams. For example, in Ikizdere there are two plants already built on the river.

When the resistance started, all the regions of the Black Sea managed to organise simultaneous demonstrations around the Rize region. The demonstrations were organised inside the forests. Only in the case of Findikli the struggle was successful, where we managed to stop the hydro-electric dam.

The hydro-electric dams not only kill nature, but take a toll on our living. The local economy is based on tea cultivation. But this cannot happen without water.

Q: Today the government has given permits to open new quarries in the same area?

A: Yes, two years ago, Gengiz Holdings started creating a new quarry in Ikizdere valley. Ikizdere valley is one of the 20 biggest valleys in the world. Their plan was to take the stones from the quarry in order to build a Logistics Port Project in Iyidere, which is only 50 km away from the river delta.

It’s only been a year since the quarry was created, and already thousands of trees have been cut and the process of deforestation is well underway.

This is not the first quarry in the area. One and a half km outside Ikizdere, there is another quarry – the Kapse-Komes quarry operated by Cevahir Beton. The damage created by this quarry to our village has led us to react to the new project. This quarry has been functioning for 15 years and already the soil has been contaminated, and the water coming to the village of Ikizdere is now considerably less. We cannot feed our animals; we cannot water our plants. The quarry has a licence for the next 40 years.

Q: What was the reaction of the local population?

A: The struggle is ongoing. People that stood up to the dam projects are now fighting against new and old quarries.

Keeping in mind our previous history of resistance, the Rize district governor declared a state of emergency in Ikizdere for 15 days, in order to allow the company to start their project without disturbance. Nobody was allowed to enter or exit the village unless they were locals. People had to show their ID cards to enter their own land. This is the first time that this happened in our area.

The people, of course, know the local landscape much better than anyone, so the state of emergency wasn’t successful in stopping the protests. It was the first time however that we saw so many Gandarma (special forces of the police) standing against so few people! Our struggle took place just after the lockdown, and with the state of emergency in place, we managed to mobilise around 50-60 people, mainly women.

For women, the protection of the environment in the area is very important. The tea plantations, farming and breeding is their livelihood. Therefore, they played a very important role. They organised the protests, put themselves inside the forklifts, they were in the front line confronting the police, stood in front of the bulldozers, they took shifts in watching the area.

Gengiz Holding is one of the 5 biggest construction companies and has very close ties with the government. You understand now, why there was so much police protecting them.

Our struggle was not limited to the streets. We tried the legal avenue as well. We filed a lawsuit against the company. Unfortunately, but not surprisingly, we didn’t win the legal battle. Even though the legal expert we consulted was saying that the quarry in Ikizdere should be declared illegal, as it is against the public interest, finally, in July 2022, the court gave the company a permit.

Q: We are so sorry to hear that. What are the next steps?

A: The ecological massacre of our area, brought upon us by capitalist policies, is continuing. The profits of these companies are more important to the government than the livelihood of the people and nature.

Recently, the water reaching the villages has changed colour. At one point it was blue! At least two days a week they use explosives which scare the birds and other animals. The natural life cycle in the area is being continuously disrupted.

We will continue the struggle. We are trying to raise awareness of these issues by organising people from the big cities to visit and show their solidarity. And today, during the Kazma Birak conference it is clear that we need each other. Movements from different parts of the world should fight together. Our solidarity gives me hope. I taught my hopes to swim, so that even if they end up at the bottom of the sea, they can still swim and resurface again.

Thank you Asli. You have our solidarity for your struggle!

Support the struggle in Ikizdere!