Taiwan: November 26 elections, a blow to the pro-US establishment 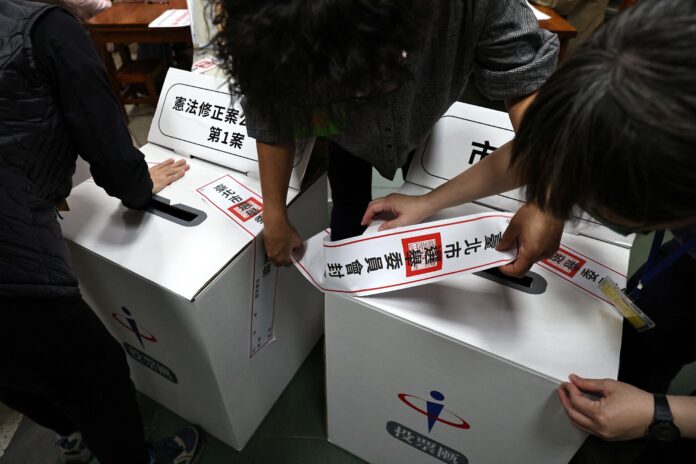 This is a slightly edited version of an articled initially published on the website of ISF Taiwan, which is part of Internationalist Standpoint

The results of the 9-in-1 elections on November 26 had a significant impact on Taiwan. These were local elections where voters were called in to cast ballots in order to elect representatives at nine levels of administration.

The most striking feature of these elections was the blow to the governing Democratic Progressive Party (DPP). A nationwide anti-DPP wave was easy to notice even before the elections. So, the DPP defeat in key cities such as Keelung, Taoyuan and Hsinchu, did not come as a surprise. The party only won the contest in five counties and cities in Southern Taiwan. As a result of this defeat, the current president Tsai Ing-wen resigned as the DPP chairperson.

On the other hand, the main opposition Kuomintang (KMT) party won 13 counties and cities and by far outperformed the DPP, both in votes and in the number of representatives it got elected. The People’s Party, which presents itself as a third pole in Taiwan politics, won a mayoral seat for the first time in the 9-in-1 elections.

From an international perspective, these elections were a blow to the DPP pro-US establishment, and a victory for the China-leaning KMT party. This is especially important in a period where the US foreign policy has put center stage the Taiwan issue in order to use it in its struggle for world domination against its main rival, China.

The outcome of the elections raises a number of questions. What were the main reasons behind the fall of the DPP? Why did the KMT and the People’s Party grow? Finally, what will be the impact of this local election on the 2024 presidential elections?

The main reason for the DPP’s defeat?

Different analysts point to different reasons that led to the DPP defeat. Some claim that it was due to the vaccine controversy. The DPP was accused of mishandling the vaccine rollout, initially getting only the AstraZeneca vaccine and failing to secure enough doses to counter the infection wave that hit the country.

Others put the blame on the many corruption scandals, on controversies between candidates and also on the DPP’s failure to achieve more significant construction and economic growth rates in different localities. However, we believe that even if these factors did play a role in the DPP’s defeat, they are not the main reason.

Firstly, as we mentioned in our previous pre-election analysis, the DPP was able to maintain relatively high percentages in 2020 and 2021, while the global pandemic was at its most critical point. In fact, those polls played a role in allowing the current president Tsai to overlook the DPP’s central committee and nominate Chen Shih-chung, a candidate with no election experience, to run for Taipei Mayor. Chen, as the minister of Health, was directly responsible for the vaccine rollout, and that certainly played a role in the DPP’s defeat in the capital. But that doesn’t explain why the DPP suffered losses even in counties and cities where its base was more solid (such as Tainan).

Secondly, the controversies between candidates and the corruption scandals are also not enough to explain the DPP’s defeat. Controversial and even corrupt individuals were actually elected in the November 26 elections. Notably, that goes for both dominant parties.

Thirdly, the accusation about the DPP’s failure to achieve local development, also proves to be weak in reality. The fact of the matter is that the DPP is not inferior to the Kuomintang in local construction projects, so there must be more important factors leading to their ultimate defeat.

We believe that the real reason for the DPP’s defeat is linked to the developments around the Sino-US conflict. As we emphasised before the election, Pelosi’s visit in Taiwan and the Chinese Communist Party’s military exercises around the island shook the public in Taiwan creating fear of imminent war, even though such a development is very unlikely at this point of time.

The Taiwan president did not hold back from making these elections a central political issue. She essentially turned the local elections into  national elections when, among other things, she stated that:

“If you have not yet decided which city or county chief candidate to vote for, then I ask you to please cast this vote for me, for candidates I am recommending.”

She also said that these elections were more than a local poll, as the world is watching how Taiwan defends its democracy amid military tensions with China.

The concern over the heating up of relations with China, with the possibility of a military conflict blowing up, has led a significant number of people to vote for the less war-mongering KMT, which puts forward the idea of “meeting the needs of both sides” and “having more dialogue with China”.

This turn was also reflected in the remarks made by China’s Taiwan Affairs Office, which stated that the Taiwanese elections

“revealed that mainstream public opinion in the island is for peace, stability and a good life”.

This actually reveals that the Chinese Communist Party’s military exercises around the island in August were not a dress rehearsal for war but rather a military show of strength to create impressions, aimed at creating fear in the Taiwanese people.

These tactics have proved to be quite effective, as the election result was indeed a blow to the DPP’s pro-US war-mongering attitude.

The KMT victory and the 2024 presidential race

The outbreak of the pro-democracy protests in Hong Kong in 2019 had ripple effects in Taiwan, as people were inspired by the struggle to resist the dictatorial Chinese regime and took a stance to protect their national identity.

Those developments allowed Tsai to win 8.17 million votes and 57% in the 2020 elections, leaving the KMT candidate with only 38,6%. The recent developments, however, allowed the KMT to make a comeback.

Although there are many different perspectives that could be realised in the near future, we believe that if the overall strategic direction of the US is to turn Taiwan into a new Ukraine, it is more likely that Taiwan’s bourgeoisie will move away from the chariot of the West.

Although the Taiwanese ruling elite is in a long-standing existential conflict with the CCP regime, it is not ready to be treated like an expendable pawn in the US’ plan to inflict pain on China. If this scenario becomes the dominant trend, the KMT will have a better chance of winning the presidential election in 2024.

Against the backdrop of the fear of a war episode, the political forces that are more vocal about Taiwan’s independence, are bound to face weakening of their electoral strength. We already saw this with the results of the New Power Party, the Taiwan Statebuilding Party and the People First Party.

Taiwan Statebuilding Party’s (TSP) main voter base is in fact the most staunchly pro-Taiwan independence layer of the DPP voters, and the support it can get from the undecided voters is actually quite limited. However, with the international situation unfavourable to DPP, TSP’s electoral position was also affected. It is therefore easy to understand why this party was not able to grow much in this election.

Unlike TSP, the New Power Party (NPP) was first established as a political party based on the development of social movements in Taiwan. After the March 18, 2014 student movement, some of the more progressive elements began a “shift to the left” and pursued progressive policies (such as environmental protection, gender equality, and labour rights). These people also became the main source of votes for the NPP. However, in recent years, as the social movements in Taiwan gradually retreated, NPP was unable to maintain its electoral gains of the 2018 elections.

Taiwan People’s Party (TPP) was the biggest winner of electoral support of the smaller forces, i.e., excluding the Green (DPP) and the Blue (KMT) coalitions. Many people not willing to support DPP, but disappointed with the KMT, placed their hopes on TPP, hoping that it will become an “alternative” KMT.

Building a left-wing alternative is the only way out

The results of this election further prove that building a left-wing political alternative is absolutely necessary. Neither the KMT nor the DPP will ever establish complete democratic rights for the people of Taiwan, not to speak of workers’ rights.

Even though these elections showed signs of a shift in the political dynamics in the country, this shift will not bring advances for working class people and the youth. As we have stressed before, in any case there will be no real peace in the Taiwan straits.

Only a left-wing mass party, focusing on the interests of ordinary people and practicing internationalism will be able to break the vicious circle of antagonism between the two major powers in the area of Taiwan. Only a real radical left force can break the Blue-Green monopoly of power and open the way for a common struggle between the working class and the youth of China and Taiwan against both the CCP dictatorship and US imperialism.