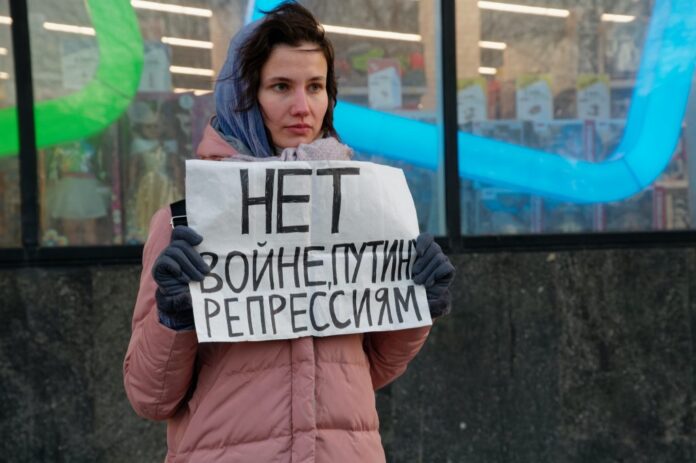 While Western governments are taking a clear position by deciding to get involved with the Russia-Ukraine war, in one way or another, anti-war rallies and marches are being organised in a number of European countries. Protests are also happening in Russia. Thousands of Russians have taken to the streets protesting the war and standing up to Putin and his authoritarian regime. Many have been arrested and faced brutal repression by the police.

Speaking out against the war in one of the countries involved is always a sign of bravery. To take a stance against the war in countries like Putin’s Russia, where expressing a different opinion, protesting, demonstrating etc. are brutally oppressed, requires a greater dose of courage. Yet, this is the stance that many Russian artists have opted for: they speak out publicly against the war and some even resign from their positions. This does not necessarily -and rightly so- mean that they identify with the positions outlined by Western governments’ or NATO.

Kirill Savchenkov and Alexandra Sukhareva are young artists who intended to represent Russia at the Venice Biennale, one of the most important contemporary art exhibitions, in April. The Biennale is an important step in their development and career, as it offers them significant visibility. However, the two artists have turned their backs to this event in order to pass on an anti-war message. In their statement they mention specifically:

“There is no place for art when civilians are dying under the fire of missiles, when citizens of Ukraine are hiding in shelters, when Russian protesters are getting silenced.”

Russian rapper Oxxxymiron (Miron Fyodorov), announced on Instagram that he cancelled six sold-out concerts scheduled in Moscow and Saint-Petersburg, in order to protest the Russian invasion in Ukraine, stating:

“It’s not Ukraine that invaded Russian territory. It is Russia that is bombing an independent state.”

He has also replaced his webpage with a black frontpage carrying the message “No to war” in Russian and in English.

Alexey Ratmansky, a former choreographer at the Bolshoi Ballet in Moscow, who now works for the American Ballet Theatre in New York, quit the new Bolshoi ballet show he was preparing in Moscow, scheduled to premiere on March 30.

Elena Kovalskaya, a theatre director who served as artistic director of the Mayerhold Theater and Cultural Center in Moscow, posted on Facebook that she can no longer remain in her position since

“It is impossible to work for a murderer and take a salary from him.”

At the same time, platforms have been set up where artists and art workers sign online petitions against the war. One of these platforms, where over 18,000 signatures have been collected, states among other things that:

“We, artists, curators, architects, art critics, managers – representatives of culture and art of the Russian Federation – express our absolute solidarity with the people of Ukraine and say a decisive “NO TO WAR!”. We demand an immediate cessation of all hostilities, the withdrawal of Russian troops from the territory of Ukraine and peace talks to be taken up.”

As expected, Putin’s regime answered with nothing but repression towards the artists and with an attempt to silence them. Vyacheslav Volodin, Chairman of the State Duma (lower house of parliament), referred to the artists’ protests as “treason” and threatened them with abolishing the state’s subsidies for the arts.

However, an artist told the New York Times, that some of the signatories have already been fired. She asked to remain anonymous (although she has signed the artists’ letter) out of fear of losing her job too.

The letter is not made public anymore: signature collection has been suspended and “the text of the letter and signatures have been concealed for the safety of all signatories, because a “fake news law” was passed on March 4, providing for a fine or prison sentence”.

And the “sanctions” of the West

On the other hand, following the financial sanctions decided by the Western leaders, many Western cultural institutions suspended their collaborations with Russian artistic houses and proceeded to cancel cultural events.

The Royal Opera House in London cancelled the Russian Bolshoi Ballet tour, due to the crisis in Ukraine. The Munich Philharmonic fired its principal conductor, Valery Gergiev, for having ties with the Russian state. Warner Bros, Disney and Sony have stopped releasing films in Russian cinemas. The European Broadcasting Union (EBU) declared that Russia will not be allowed to participate in this year’s Eurovision Song Contest. Similar cancellations were decided in Greece, France, Croatia, the UK and other countries. Overall, a series of cultural events have been cancelled by various operators due to Russia’s invasion of Ukraine.

Imposing the Western stance on artists

The Greek National Opera and the Philharmonic Orchestra and Choir of the Municipality of Athens were asked to identify with the official position of the Greek government, which is fully supporting NATO and Greece’s involvement with the war. The government has already sent riffles and other war material to Ukraine. Specifically, the administrative boards of these two cultural institutions asked the artists to open their performances by playing the national anthem of Ukraine, in the case of the Philharmonic, and by reading a declaration of support for Ukraine, in the other.

The artists in both cases held a brave and clear anti-war stance. Their unions, after a member’s vote which took place in large assemblies, refused to comply with the orders from above, and honoured art, as an expression of fraternity and solidarity between peoples.

Their stance, and the procedures followed, were distorted and slandered by mainstream media, supportive of the government’s position. They tried to portray the unions as undemocratic and the artists as manipulated victims of specific trade unionists, thus undermining their intelligence and critical evaluation.

In their statement, the Athens Philharmonic musicians’ union stresses the attempt of the municipality’s administration to use art as a propaganda tool and state:

“This propaganda is in these days culminated by the government using art and culture as a tool to strengthen the EU/US policy and promote a deeper involvement in the war in Ukraine. It is no coincidence, after all, that the government, through the Minister of Culture, recently decided to cancel a performance of Tchaikovsky’s work and to issue a “directive” to suspend all cooperation with Russian artists.”

On a similar tone, the union of the National Opera artists, is stating:

“We express our opposition to the move of the administration related to such a serious issue, and about which we were never consulted. The administration decided to publish a one-sided statement on the war in Ukraine. We do not support either side of this war. Art should unite people. We support peace. We stand in solidarity with the Ukrainian people and the peoples of the region. We do not accept government propaganda which is attempting to legitimise the involvement of our country in the war. We say: stop the war now.”

Their statement concludes as follows:

“For years we have been co-existing in the theatre in harmony with fellow Russian, Ukrainian, Moldovan artists etc. We will not let any administration or government divide us. We do not align ourselves with any belligerent side, with any war propaganda manipulating culture.

We will continue to defend our positions and state:

Sanctions; but for whose profit?

The question is: who is actually affected by these decisions? And what are they able to achieve?

Once again, neither Putin, nor his regime, not even the “celebrities” who see their performances cancelled are the ones who will suffer the most. Such measures mainly affect art workers, as cancelling these events will lead to unemployment or at the very least a significant reduction in their income. Alongside the artists, communities are also harmed, because they will have fewer opportunities for entertainment and cultural enlightenment, which is necessary in these difficult and dark times.

Basically, it is art itself which is under attack, since it is all of a sudden, limited within “borders” and “origins”, whereas its fundamental role is to be universal, created by and offered to all humans. There is an effective witch-hunt against any piece of art considered Russian. Universal masterpieces are condemned and ostracised simply because they were created by Russian artists. This is undeniably racism – and this decision is coming directly from European Union officials and institutions. It is hypocrisy, vindictiveness, and at the same time, it is absolutely ridiculous.

Leaders and institutions are attempting to impose obscurantism, by perpetuating hatred and intolerance. We can only respond to all of this with solidarity to the peoples who are called to fight and die for the profits of the system. We oppose “Western sanctions”, we choose to stand with the Russian artists who are standing up against Putin’s regime and the war itself.