Protests against the war in Ukraine: thousands arrested in Russia 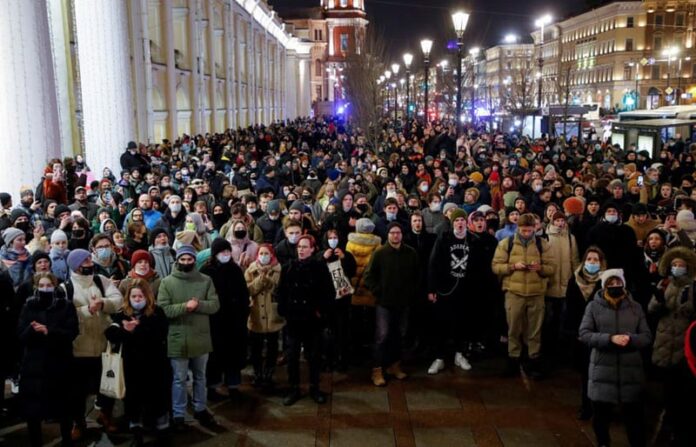 Larger of smaller anti-war demonstrations were organized, over the past couple of days, in several countries and within Russia itself. In most cases we had some tens of people, mostly migrants from Ukraine, outside the Russian embassies of various countries. Some of them, however, have been more larger, such as the gathering of 650 demonstrators (according to Deutsche Welle) outside the Russian Embassy in Berlin, or a few hundred (according to CNN) in the Place de la République in Paris. It is clear that at this stage, we don’t yet see a mass movement internationally against the invasion of Ukraine –  at least for the moment.

Protests against Russia’s invasion of Ukraine have also taken place in Russia, mainly in Moscow and St. Petersburg, but also in dozens of other cities. The police repression of the protesters was enormous, typical of Putin’s authoritarian regime. According to the Russian alternative media OVD-Info, 1,835 arrests have been recorded in 60 cities!

The photos and videos that have been circulated reveal the brutality of the repressive forces against peaceful protesters.

It should be noted that in Russia, under Putin’s rule, essentially all opposition rallies/demonstrations are banned. Therefore, activists usually resort to the only means they are left with: to stand alone at a certain point holding a placard with a slogan! Otherwise they face police repression and arrest.

If this is Putin’s “democratic” regime, one can easily imagine what kind of regime he will establish in Ukraine after the military invasion.

Hypocrisy of the West

This criticism to Putin’s regime certainly does not mean any kind of support or even tolerance to the regime of Zelensky, who is nothing but a man who serves the interests of Ukrainian and Western capitalism brutally suppressing and exploiting his own people. Zelensky does not only not recognise the right to self-determination of the provinces with a Russophone majority in Eastern Ukraine; he does not recognise basic democratic rights to national minorities, not even the right to the free use of the Russian language (as well as other national minorities’ languages).

Nor, of course, should we turn a blind eye to the hypocrisy of the US, EU and NATO “democrats” who have used the same practices and even worse than what Putin is doing at the moment. Let’s only remember, for example, Yugoslavia and what happened there, and compare it to what the Western media are claiming today that in the Ukraine we see the worst war in Europe since WWII…

These same “democrats” in the West are the ones who basically threw Ukraine into the wolf’s mouth, and are now letting it pay the price on its own. They are dishonest and hypocritical that they are even ditching Zelensky who was until recently their favorite “child”, a loyal and obedient servant. In the recent period they began to present him as an “incompetent comedian” (which he is, if we have to be frank).

For an anti-war movement

The essence behind the confrontation and the war under way, is the clash between different imperialist interests. The workers and young people will be paying for it with their own blood.

In the face of this conflict, the Left and the international labour movement have no interest in supporting one side against the other.

We need to fight against the war, to call for joint anti-war demonstrations aimed against both Putin’s invasion and the plans of the Western capitalists and NATO in the region.

At the same time, we need to support the right to self-determination of the Russian-speaking population of Ukraine. And to aim against the capitalist system itself, which generates the imperialist wars in order to expand its interests and profitability on the backs of the peoples of the planet.