November 9: 33 years since the fall of the Berlin Wall 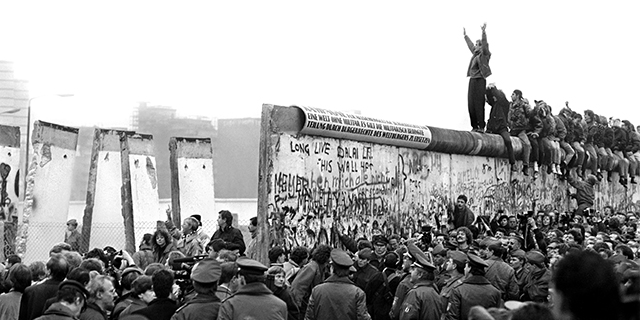 33 years have passed since the Berlin Wall fell, accompanied by mass protests, in a process that ended up in the restoration of capitalism and the German re-unification. The representatives of the bourgeoisie, who declared the overthrow of Stalinism (which they called “real socialism”) to be the decisive victory of capitalism over socialism, are today talking about the possibility of a third world war with nuclear weapons. There is no doubt that the capitalists and their governments, who propagated for years after the fall of the Berlin Wall and of the stalinist Eastern Bloc that socialism was a non-functioning system, will continue this propaganda. They seem to be ignoring the fact that the capitalist system, which today has brought humanity and nature to the brink of destruction, does not work for billions of people worldwide.

The founding of the German Democratic Republic (GDR- aka East Germany) and the construction of the Berlin Wall were closely linked to the interests of the ruling bureaucratic caste in the Union of Soviet Socialist Republics (USSR). The foreign policy of the USSR was of course driven by security concerns against imperialist aggression. But these concerns also extended to revolutionary situations anywhere in the world that might inspire the working class in the USSR to fight for real workers’ democracy. In this context, the Soviet bureaucracy intervened in revolutionary workers movements through the communist parties in other countries.

This policy came at a huge cost for the struggle of the working class around the world. The policy of “social fascism” of the Stalinist bureaucracy against the Social Democratic parties (claiming that social democracy was a bigger enemy of the workers movement than fascism!), led to Hitler’s seizure of power in Germany. The other side of the same Stalinist coin, the policy of the “Popular Front” (which propagated an alliance of workers parties with bourgoise forces), led the socialist revolution in Spain to defeat. Shortly before World War II, the Stalininst Communist Party of the Soviet Union signed the Molotov–Ribbentrop Pact, with the illusion that it could prevent an attack by the Nazis on the USSR. This shameful agreement was also signed to extend the sphere of influence of the ruling bureaucratic caste to Poland and the other Baltic states. When Hitler invaded the Soviet Union, Stalin formed an anti-Hitler coalition with the capitalist USA, Britain and France without any principles- even dissolving the Comintern (Communist International).

Britain and the other imperialist powers initially hoped that Hitler would first attack and defeat the Soviet Union. But given the German fascist-capitalist ideal of becoming a world power, they were forced to form an alliance with the Soviet Union in order to stop him.

With the defeat of Hitler’s fascism, the basis for this alliance disappeared. Decisive for the relationship between these blocs were the profound conflicting interests between two fundamentally different economic systems – capitalism on the one hand and socialism, albeit a deformed one, on the other.

The spread of socialist ideas and movements in many countries after World War II, was met with concern by the imperialist states. On March 5, 1946, British Prime Minister W. Churchill made a speech in which he declared political war against the USSR and coined the term “Iron Curtain”. Churchill called on the capitalist states to form an alliance against the socialist camp. At the same time, this was the beginning of the Cold War between the two opposing systems. In March 1947, US President Truman announced a doctrine of economic and military assistance to countries supposedly threatened by the USSR. The Korean war was one of the first -not so- proxy conflicts. On the other side, the Marshall Plan was launched to prevent socialism in Europe. These policies were accompanied by a fierce anti-communist witch-hunt, especially in the USA.

On May 23, 1949, the Federal Republic of Germany was founded in the western part of Germany, under the control of the USA, Great Britain and France. This was followed, on October 7 of the same year, by the founding of the German Democratic Republic (GDR) in the territory controlled by the USSR.

The Soviet bureaucracy did not want a socialist Germany. Instead, it favoured a demilitarised, neutral, capitalist buffer state, which would better serve its interest in creating stability and security. The interests of the bureaucracy required maintaining the status quo, suppressing independent socialist movements of the working class and finding a balance to survive side by side with imperialism. The complete abolition of capitalist conditions in the GDR and the transition to a state-controlled planned economy was a reaction to the policies of the Western powers. But even in 1952, Stalin was still prepared to sacrifice the GDR as a buffer zone. He made an offer to the Western powers, the so-called Stalin Note, which envisaged a united, neutral Germany with its own armed forces. This proposal was rejected. The attitude of the Western powers can best be summed up in the words of Adenauer, the first Chancellor of the Federal Republic of Germany:

After the end of the war, a clear pro-socialist mood prevailed in the German working class. In many cities and workplaces, a dynamic of anti-fascist self-organisation of workers developed. They formed anti-fascist committees and council-like structures and began to get the economy and public services running again: arresting fascist officials, taking control of factories and getting life going again.

In East Germany, however, a Stalinist regime, similar to that of the USSR, was established. On the one hand, capitalism was abolished by abolishing private ownership of the means of production, through expropriation and a move towards a planned economy; on the other hand, political power was concentrated in the hands of a privileged elite, the bureaucracy, organised in the unelected Socialist Unity Party of Germany (SED). The SED was a party created by the USSR through the merger of the KPD (Communist Party of Germany) and the SPD (German Socialdemocratic Party) and was essentially under the direction of the Soviet bureaucracy.

Discontent grew in the working class over the increasing bureaucratisation. The bureaucratic caste pushed for productivity increases and demanded that workers intensify production and raise quotas. But this benefited only the new bureaucratic elite and not the working class. This situation gradually provoked resistance among the workers. The bureaucracy resorted to special measures in order to break this resistance, such as the dissolution of the workers councils.

The growing discontent of the working class with the Stalinist bureaucracy and its repression finally culminated in a revolutionary popular uprising on June 17, 1953. The uprising featured strikes, mass demonstrations and political protests throughout the country. It included political, economic and democratic demands and quickly spread to almost all cities of East Germany. Hundreds of thousands of people took part in protests in hundreds of cities. Unfortunately, this revolutionary uprising was bloodily put down by troops of the Soviet army with the participation of the police forces of the East German regime.

After the surrender of the Nazis, on May 8, 1945, US, British and French troops initially occupied Thuringia, Saxony-Anhalt and Mecklenburg. When they later withdrew, the Soviet Union evacuated the western part of Berlin in return. Berlin thus became a four-sector enclave within the GDR, consisting of a Soviet, an American, a British and a French sector and jointly administered by the four powers.

In 1961, East Germany was in an even greater crisis than in 1953. At that time, the number of people fleeing East Germany and East Berlin was counted in the millions! This exodus, which included many well-educated people, exacerbated the economic crisis. Berlin had also become an escape route for people from Poland and Czechoslovakia.

By the end of the 1980s, growing economic, political and social problems were evident throughout the Eastern bloc. The fraudulent polls of the local elections in East Germany on May 7, 1989 sparked widespread outrage. The SED announced that its list got 98.85 per cent of the vote, after a 98.77 per cent turnout! Local opposition groups published proof of fraud and protests ensued. In addition, the SED leadership praised the Chinese army’s bloody suppression of the reform and protest movement in the Tiananmen Square on June 4, which was intended to intimidate the domestic opposition.

Faced with increasing repression, some citizens decided to flee to the West via Hungary, while the majority wanted to stay and change the system. As discontent grew, the opposition became louder. On September 4, a demonstration took place in Leipzig with about four hundred demonstrators carrying the banner “An open country with free people”. The demonstrators were attacked by the security forces who tore down the banner and arrested people. These demonstrations became regular under the name “Monday Demonstrations”. At these demonstrations about a month later, the number of participants had already grown to one hundred thousand. By November 4, there were almost a million demonstrators in Berlin.

Trotsky, arguably the most important leader of the October Revolution along with Lenin, characterised the Soviet Union as a “degenerated workers’ state”: a state in which private ownership of the means of production had been abolished, capitalism had been overthrown by a planned economy and a monopoly on foreign trade, but administration and control were in the hands of a caste of bureaucrats rather than the producers. In his view, the future of this state would take one out of two paths: Either the working class would defeat the Stalinist bureaucracy, take control of all areas of social and political life and restore socialist democracy; this would take the form of a “political revolution”. Or there would be a counter-revolution, a return to the previous social system, thus a capitalist restoration. In the social developments that took place in the GDR in 1989 and culminated in the fall of the Berlin Wall both possibilities were present, even if only one was realised.

The masses did not take to the streets for the establishment of a capitalist system, but for freedom and democracy in the face of the rotten Stalinist bureaucratic structure. But even though the masses had shaken the SED leadership and forced one hardliner after another, like the state and party leader Honecker, to resign, everything remained under the control of the bureaucrats. The opposition was unable to bring together the various subversive elements in initiatives, councils, committees, trade unions, etc. throughout the country to overthrow the Stalinist bureaucracy and build democratic structures from below instead. Such an approach could have been the first step towards the realisation of socialist democracy.

Due to these factors, the second path for the fate of the GDR, that is capitalist restoration, became increasingly apparent. On the evening of November 9, 1989, the opening (demolition) of the Wall, which came with the false promise that millions of people will experience the so-called prosperity of the West, accelerated the process of capitalist restoration that culminated in the unification of the two states.

Although it was essentially Stalinism that collapsed with the Berlin Wall, the fact that there was no organisation and leadership of the working class to promote the political revolution, meant that there was a push towards capitalist restoration. Hence, the working class movement paid a heavy price with a major defeat, both an ideological and an organisational one. The lessons of these events have to be studied carefully. No formation that enshrines socialism on its banner as an alternative to capitalist exploitation, plunder, wars and destruction of nature will be able to tread the path of socialist change without settling accounts with the phenomenon of Stalinism.