Deep sea mining: A new threat for the environment 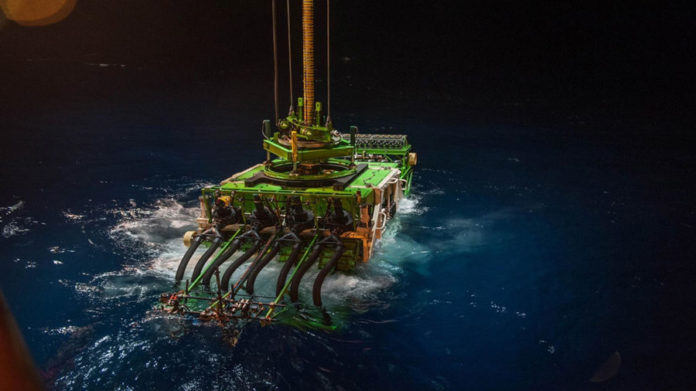 Huge open trenches, excavation machinery, explosions, toxic waste…. these are the images that come to mind for most people when they hear the word ‘mining’. Mining also includes inhumane and utterly dangerous working conditions (in certain circumstances it even involves child labour) taking place mainly in poorer African and Asian countries. However, these images become even more complex when someone adds in the picture ‘deep sea mining’. We are talking about mining for rare minerals used in the manufacturing of batteries found in smartphones, computers, electrical cars and other technologies (such as lithium, cobalt, nickel, manganese etc).

However, this is not the full picture. Future plans for the deep sea mining industry, outlined by governments and energy companies, include scanning the seafloor in order to harvest the precious minerals. These rare minerals are embedded in small rocks, about the size of a potato, found on the seabed at depths ranging from 3,500 to 6,500 metres and are referred to as polymetallic nodules. The plans to harvest these nodules involve extracting the whole top layer of the sea floor (5-10 cm of sand and rocks) and transferring it on to ships where the nodules will be collected. The sand will be discarded back to the sea and the polymetallic nodules will be utilised by deep sea mining companies.

Environmental sustainability is used as an excuse

A big part of the argument used for the case of deep sea mining is that these rare minerals are an integral part of the so called ‘green transition’. The story goes that their harvest and utilisation is necessary for the construction of electric cars, solar panels and other energy storing devices. In reality, this is problematic since the stored energy (for example, in an electric car battery) is still produced by fossil fuels. This notion is kept quiet by the companies that produce such products and the governments that support them. Importantly, in addition to the impacts of mining, the disposal of the energy storing devices at the end of their use-by-date is directly linked to the destruction of ecosystems and excessive pollution.

One of the main arguments used, is that deep sea mining does not have the same environmental consequences as land mining, such as destruction of forests, creation of toxic waste etc. In reality, we are up against a very dangerous process with incalculable consequences to marine ecosystems (see below).

Energy companies view deep sea mining as an opportunity to increase their profits by way of the ‘green transition’. This is reinforced by the fact that land mineral supplies are near exhaustion. For example, cobalt reserves are close to being depleted whereas demand for this metal is expected to double by the year 2026 when compared to its demand in 2018. However, the seafloor is filled with this ‘treasure’. It is estimated that the oceans’ polymetallic nodules contain 270 million tonnes of nickel, 230 million tonnes of copper and 50 million tonnes of cobalt. Of note, the global demand for nickel is a little over 2 million tonnes per year.

The truth is, deep sea mining is a completely novel process and thus, it is impossible to estimate its exact environmental impact. Despite this, and according to Greenpeace, scientists have already warned that there will likely be multiple consequences ranging from the creation of noise pollution and its negative impact on marine species to the direct destruction of marine plant and animal organisms. This can occur during the removal of the top layer of the seabed but also through sand dumping after the nodules have been extracted.

‘Deep down in the ocean, valuable raw materials are stored, such as nodules of manganese, iron, cobalt and copper. The resources from these nodules could help meeting our increasing demand for rare metals. However, in addition to the nodules, there is another treasure down there: A complex ecosystem that we still barely know and understand. Researchers from Bremen and the Netherlands have now discovered that sponges, which like to settle on the metallic nodules, also provide a home for many other animals. Without the nodules, species richness in these deep-sea regions would be significantly lower’

Having carried out decade-long studies on the marine life that grows around the polymetallic nodules, researchers from the Max Plank Institute estimate that their harvest will have long-term consequences not only for the sponges and the numerous species they support, but also the growth of microorganisms, the local food chain and even the carbon cycle, a chemical reaction necessary for every single life form on planet earth.

Treasure, but for whom?

Today, this underwater treasure is under threat. The International Seabed Authority, which is part of the UN, and has a responsibility to protect the seabed, has already issued 30 licenses allowing for the exploration and mining of the deep sea. An important area targeted by the ‘green development’ is the Clarion Clipperton zone. This is a huge underwater area of around 6 million square km, found in the Pacific Ocean, between Hawaii and Mexico, which is estimated to contain up to 6 times more cobalt than all the known land sources put together.

However, this area is also known for its immense marine biodiversity. Many of the life forms that this area hosts have only been recently documented, while it is estimated that many more remain undiscovered.

Scientists have expressed concern that if plans to harvest the polymetallic nodules go ahead, then there is a strong possibility that this will lead to the extinction of species we did not even know existed. In addition, some of the organisms found there could be used for antibiotic resistance medical research, such as that carried out at the University of Plymouth.

The role of the oceans and the depletion of natural resources

The planets oceans are not simply large water reservoirs. They are complex ecosystems that together with other, land ecosystems (such as forests), are responsible for processes necessary for the existence of life on the planet. This ranges form the production of oxygen and the absorption of carbon dioxide to temperature regulation and food production for humans and other species. The planned interventions can cause serious disruptions to the already burdened marine ecosystems and lead to the further destruction of natural resources.

Energy production and storage that relies so heavily on natural resources that will eventually be depleted is a process doomed to fail. This alone should cause great concern about the future of the planet. However, all current solutions further involve polluting and destroying whole ecosystems in addition to the exploitation of populations in poorer countries.

Today, the climate emergency is used to justify the implementation of such catastrophic practises. However, the climate crisis is not something new. Governments and multinational energy companies that are supposed to take care of the environment have had ample time to prepare and invest in research around renewable energy resources and respond to the problem of gas emissions with minimal environmental impact. Instead, they continue to suck Earth dry of oil and natural gas, they continue to burn coal like there is no tomorrow and simultaneously advertise industrial sized wind and solar parks as ‘green’. A solution that has been proven to destroy precious ecosystems all in the name of ‘environmentally friendly’ solutions.

The real solutions, those that can help the Earth and its populations ‘breathe’, can only be designed, researched and implemented by human communities after they are rid of the prevailing systems of profit. As environmental destruction continues this necessity becomes all the more urgent.