Cyprus rape case: She is innocent! A victory for the 19-year-old woman and for the women’s movement! 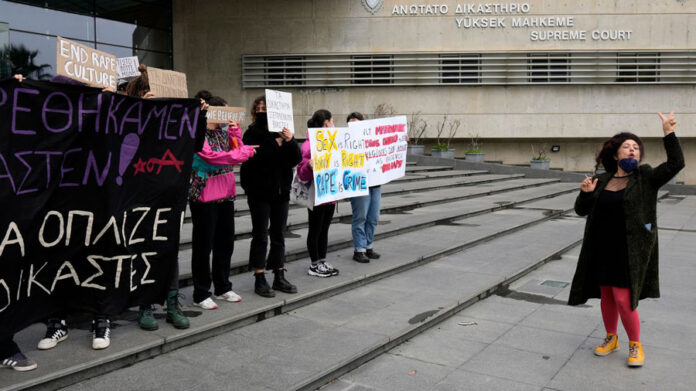 The 19-year-old British woman, who was convicted two years ago for “public mischief after a false report”, was found innocent by the Republic of Cyprus Supreme Court yesterday, Monday, January 31st. She was initially convicted because she dared to report that she was raped by a gang of 12 Israeli tourists, all sons of very rich businessmen all part of the Netanyahu circle, at a hotel in Ayia Napa, in 2019.

The new decision of the court makes her 4-month sentence obsolete.

The women’s movement that developed around the case played a pivotal role in this development. On the one hand the movement was there to support the 19-year-old British woman on every occasion. On the other hand, the movement tried to open up to society the wider issues related to the sexist conduct of the police and the judiciary system.

Feminist groups and activists in Cyprus, Israel and Britain, gathered outside the court, on the streets, demanding justice. It was thanks to this movement that her sentence was reduced and she was finally pronounced innocent.

The personal stance of the 19-year-old also played an important part in this- her courage and fighting spirit. When she returned back to Britain, she gave lots of interviews and statements, answering all the lies that were published by the media against her during her court case. The fact that she found the courage to report her rape against such powerful people, has become an inspiration for other women to come forward and to report that they were raped when they were on holidays in Cyprus and other places.

Her lawyers also had a very difficult task. They had to deal with a systematic bias against her by the police and the judiciary, who tried to cover up the case. The police forced the 19-year-old to change her deposition, and convicted her even before the case went to court. The judge shouted and treated her with contempt; he refused to accept the evidence that was presented to him. Her decision to not give up the legal case after the initial conviction was important- her insistence to demand justice was finally rewarded.

This victory is not just a victory for the 19-year-old. It is also a victory for all the women in Cyprus. With this verdict, the Supreme court actually confirmed that the way the police handled the report and the decision of the Famagusta court was indeed sexist. It reveals the real face of the police and the judiciary system- acting as guardians of patriarchy.

At the same time, it was again proved that when we resist, when we don’t give up, we will eventually have victories.

The struggle for justice is of course not over.

We also demand that:

We stood by the 19-year-old woman from day one, and we will continue to do so. The women’s movement shall leave no-one alone in the struggle against gender-based violence. We will strive to organize a united struggle against sexism, misogyny, patriarchy and finally capitalism- the system that perpetuates all of the above.