USA: The formation of a union in an Apple store and the resurgence of fighting trade unionism 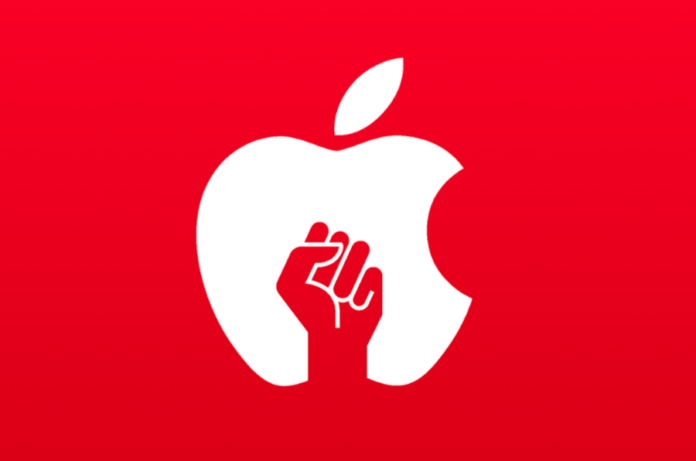 Workers at the Apple store in Towson, Baltimore, Maryland, voted on Saturday, June 18, in favour of establishing a union for the tech giant’s employees for the first time in the US.

The decision was made by a 65-33 majority, and they are now members of the International Association of Machinists and Aerospace Workers (IAM). The result came after a month-and-a-half-long campaign that began in early May.

This is another notable labour battle and victory, as the workers through their union will be able to assert themselves from a stronger position on issues such as wages, working hours and staff safety (for example on issues related to the pandemic).

This development may provide inspiration and push workers in Apple’s 270 stores to come forward in the struggle and organize their own unions.

Apple’s skilled workers are paid an average of $20 (19€) an hour. Wages have been kept at low (by US standards) levels, despite the company’s increased revenues and record profits in recent years.

Apple’s balance sheets for the quarter ending in March show it had revenues of $97.3 billion. That’s a 9% increase year on year.

According to Market Watch (a website that provides financial information and analysis), Apple was one of the most profitable companies in the first year of the pandemic, despite store closures and supply chain disruptions.

The formation of the first workers’ union at an Apple store follows recent labor struggles that have galvanized a small but important layer of the U.S. working class. The result is the creation of new labor unions in a number of workplaces.

At 169 Starbucks stores, workers have managed to organize unions. The establishment of a union at the Amazon warehouse in Staten Island, New York, was a historic success for workers. Google workers took an important first step by announcing the formation of the Alphabet Workers Union which has over 900 members.

These developments show that US workers have entered a new phase of struggle and are looking for a way to collectively fight for better wages, humane working conditions, safety and dignity in the workplace.

All of this has happened under enormous pressure from the employers who have put their mechanisms in place in order to reverse the militant mood and intimidate those who have stepped forward to form unions.

In 2021, Amazon spent $4.3 million on a campaign to convince workers to vote against unionization.

Similarly, Starbucks management, prior to the vote in the Buffalo stores, sent an army of managers and consultants to prevent any attempt to organize workers.

When top multinationals like Amazon spend huge amounts of money and the workers do not bow down, one realizes the significance of these developments.

Increase in applications for the creation of unions

The fact that a militant mood is developing in the ranks of the working class can be seen from the large increase in applications for the creation of trade unions.

At the same time, however, there has been a steady decline in union membership for decades. According to US Bureau of Labor Statistics data, 10.3% of wage and salary workers (14 million workers) belong to unions, compared to 20.1% in 1983.

This picture seems, at first sight, contradictory and paradoxical. But it can be attributed mainly to the fact that the trade union leaderships of the previous period appeared unable to cope with the needs and demands of the workers, who in turn turned their backs on these union leaders.

However, despite the general decline in union density, the willingness of workers to unionise in new workplaces, such as the tech industry, coffee shops, supply chains, etc., is clearly on the rise.

A new generation of workers

Although union membership is declining, according to the polling firm Gallup Institute, 65% of the American public has a positive opinion of labor unions. This is the second highest percentage since 1965, when the figure was 71%.

At the same time, positive opinions towards unions are very high among those aged 18-34, with the figure reaching 77%. It is no coincidence that the percentage of workers aged 25-34 who are union members has increased from 8.8% to 9.4% (about 68,000 additional workers).

It is this new generation of workers who have grown up during the previous economic crisis, who are faced with unaffordable rents and mountains of student debt (the average graduate finishes their studies with $30,000 debt, while student debt totaled $1,7tn in 2019). This new generation of workers is beginning to realize that the only way to improve their living standards is to organize into unions to fight their battles on better terms.

These labor successes are very encouraging for workers, especially young workers, in the United States. At the same time, however, we need to stress that this is only the beginning.

There is no doubt that the employers will do everything in their power to put obstacles in the way of workers’ organising and, as they have shown, they will not hesitate to spend millions of dollars to achieve this. It is also a fact that the US is a vast country, which by itself is a challenge for union organisers- for example, Starbucks has 9,000 stores in the US.

But for the workers there is no other way. Building new unions, expanding and coordinating them is the only way to win – and more and more workers understand this. Of course, it should be stressed that the issue of internal democracy inside the unions is crucial – because only in this way can the rank and file control the leaders and apparatuses to safeguard its trade unions from the dangers of bureaucracy, corruption and sell-outs.