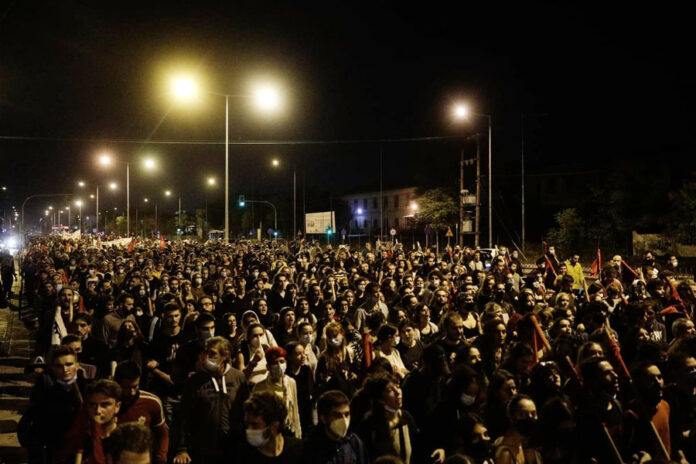 About one year after the fascist Golden Dawn conviction as a “criminal organization” in the courts (October 7, 2020) the attempt of the fascists to organize their forces and go on the offensive again became evident in Stavroupoli, a working-class neighborhood in west Thessaloniki. Openly neo-nazi forces infiltrated the local school, and, together with some of their co-thinkers inside the school, violently attacked antifascists. It was clear that the fascist groups were aiming at rebuilding their forces, targeting the youth and, more specifically, the school students.

The antifascist movement gave a strong answer, as 4,000 antifascists marched in the streets of Stavropouli on the next day.

This is an edited version of a public statement of the Xekinima organization in Thessaloniki, with an introduction and an outline of the events, for non-Greek readers.

On September 22nd, a small group of university students intervened outside the secondary schools of west Thessaloniki to distribute a leaflet. This leaflet was about the new attacks on education by the right-wing New Democracy government, which led to tens of thousands of school students (about 20,000 more than in previous years) excluded from public universities. The university students were aiming at building a common front with the school students against these attacks.

A group of school students, members of far-right and neo-nazi groupings, physically attacked those handing out leaflets. On September 28th, a small protest was organized in front of the school as an answer to this attack. Once more the protest was violently attacked by the neo-fascists. More of them had infiltrated the school carrying knives and bats, and used it as a base to come out and attack. Together with their co-thinkers inside the school, they injured a number of antifascists, who ended up in hospital. They were also filmed giving the Nazi salute (the Zeig Heil hand sign). The same events were repeated on the next day. This time, however, they used petrol bombs against the antifascists, as well as rocks and iron bars. The fascists did not only attack protesters outside the school, but also school-students who did not share their opinions.

During all these events the riot police was present, but they acted in a way to protect the fascists and threw tear gas against the antifascist demonstration! The principal of the school also gave cover to the fascist elements helping them to flee from the school building after the events. The government tried to “wash its hands” saying generally that they are “against violence, wherever its coming from”, refusing to accept that the violence originated from the fascists and jumping on the “two extremes theory” bandwagon, (the theory which presents fascism and communism to be more or less the same).

These events gained huge publicity all over the country. A demonstration was called for September 29.

The anti-fascist march that took place on that day in Stavroupoli, was a huge success. It raised the morale and the fighting mood of the movement, after the barrage of fascist attacks in the area.

The rally was massive and it is impossible to give an accurate estimate of the number of people who participated, it was probably over 4,000. It was the biggest local anti-fascist rally ever held in the area, and can only be compared to the large anti-fascist rallies held in the city center in previous years.

This shows the healthy reflexes of society and especially of the youth, who, after an initial shock, realized that the battle against fascism did not end with the trial and conviction of the Golden Dawn leaders last year, that the fascists were becoming active again and that a massive response was needed in Stavroupoli.

In this context, the unifying character of the call from all parts of the movement played a central role: KKE (the Communist party), the extra-parliamentarian left, as well as anarchist groups, all rallied to the same gathering, coordinated the guarding of the streets accessing the square and proceeded in a unified way. This is an important step forward in relation to the fragmentation that characterizes the Greek left in general and its “inability” to act together even on simple and straight-forward issues.

The police, who at first maintained an indifferent attitude actually providing cover to the fascists, because of pressure from the movement and the provocations of the fascists, were finally forced to intervene and proceed with arrests and detentions.

It was then that knives, iron bars, etc. carried by the fascists were revealed. Further investigation and research carried out at the homes of those arrested, revealed that they even possessed live weapons!

The events in the Stavroupoli school, were part of an organized plan by fascist groups, as was proved by the messages they exchanged privately but also publicly on social media.

This is also confirmed by the public statements of support issued by the local Golden Dawn gang and the fascist-nationalist members of “Ieros Lokhos” (“Sacred Squad”).

The Stavroupoli events were combined with attempts to hand out neo-fascist leaflets in other schools (for example in Pylaia, another neighborhood in East Thessaloniki) and the attack with stones against the LGBTQI Pride march in Thessaloniki (on September, 25).

The Stavroupoli events are certainly not isolated and certainly the problem will not end with one mass anti-fascist rally. At the time of writing, more demos and counter-demos are being organized, the confrontation is far from over.

The events clearly show that, one year after the historic October 7th, 2020, when the entire leadership of Golden Dawn were convicted and imprisoned, not only have we not got rid of fascism, but fascists are trying to rebuild, starting from schools. This should sound the alarm for the left and the anti-fascist movement to act now.

The feelings of a section of the youth and the residents of the area are currently dominated by fear. This must be brought to an end. Our proposals in order to achieve this are:

One central conclusion to be drawn from the experience of the past decade is that we must act fast to stop the fascists from re-emerging and before they manage to take root in society again. This is absolutely necessary in order to avoid a repetition of the experiences with Golden Dawn in the first part of the previous decade and in order to remove fascism as a deadly obstacle in the endeavors and struggles of the youth and the working class.