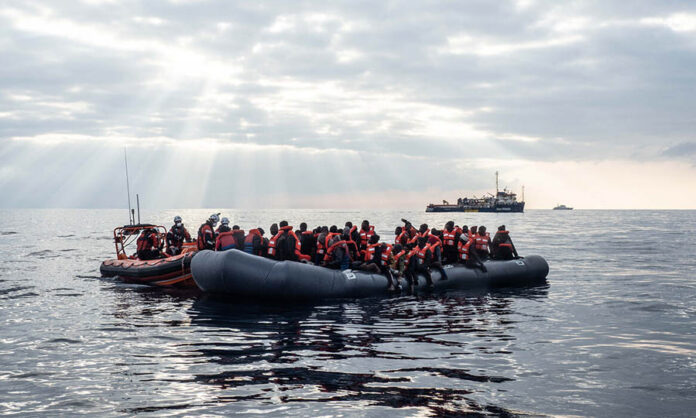 We are presenting in this article the important investigation titled “Unmasking Europe’s shadow armies“. It was conducted by a large team of journalists from different media outlets and countries and it exposes the Greek and other governments who are responsible for refugee push-backs at their borders.

Of course, important as it is, negative publicity alone will not hold back government policies unless it is complemented by a mass movement demanding that the push-backs stop. This is especially so in the case of illegal push-backs in the Aegean Sea by the Greek Coast Guard, taking into account that the Greek right-wing government of New Democracy considers pushing refugees/immigrants out of Greece and the EU a “badge of honour”. That is why it occasionally complains about the EU officials who, instead of congratulating it as an efficient watchdog of fortress Europe, sometimes reprimand it for not taking at least some measures to save face, in order to obscure negative publicity.

After the revelations, Prime Minister Mitsotakis and the Ministers of Immigration, N. Mitarakis, and Shipping, G. Plakiotakis, were quick to reassure the Greek Coast Guard that they have complete immunity and took full political responsibility for all the illegal actions and atrocities.

“I will not apologise for defending our borders”

N. Mitarakis, in a written statement on the same issue, exclaims:

“We are not apologising for our continued commitment to dismantling these human trafficking networks and protecting Europe’s borders.”

Many journalists disguised as fishermen, spent hundreds of hours at the border areas of Croatia, Romania and Greece, using drones, and analyzing satellite images. 635 videos were processed. In at least fifteen cases, masked men were recorded deflating plastic boats with hooks, shooting into the water, and pushing lifeboats with refugees/migrants towards Turkey.

They also spoke to a dozen current and former police and port officials and finally followed the digital footprints of the men in masks and clubs on Instagram and Facebook.

All this material was evaluated by two Greek senior and experienced port officers, who ruled with certainty that the Greek masked men are staff of the three elite forces of the Coast Guard: The Special Missions Group, The Underwater Missions Unit and The Special Missions Squadron.

These three corps have received special training to deal with terrorism, smuggling, drug trafficking, etc, and of course are heavily armed.

The same experts have ruled that the orders for these operations will not be found in any incident registry or in the official records of the control centers, precisely because they violate international treaties and laws as well as the law of the sea.

One video even captures a snapshot of a coastguard enjoying his mission, responding to the begging panicked refugees with the familiar gesture of pointing to his genitals…

Could this be the uncontrolled actions of some reckless members of the Coast Guard, acting on their own, or is the state apparatus behind all that, one might ask?

The answer is clearly given by the government itself.

The refusal to organize even a formal investigation, to assess the media material, to condemn, even verbally, the illegal methods and to announce measures against those responsible, shows that the orders come from government officials.

In other words, what we have here is the deliberate building of a parastatal structure acting in complete secrecy, which does the “dirty job” that the state does not want to be seen doing.

The same is evident from the latest Amnesty International Report (June 2021) where reference is made to twenty-one recorded cases of refoulement, which took place in the last half of 2020.

“…the repatriations are carried out by people who sometimes carry insignia and sometimes they don’t, who are dressed in civilian clothes. There are testimonies of people piled up in unmarked vans smelling of excrement and blood, heading to unknown destinations…. People are detained for periods ranging from a few hours to more than a day… There is a reported lack of sanitation and clean water or absence of basic sanitary facilities. Families are separated, violence is used, beating with clubs, kicking, slapping, pushing. There are reports of fathers being stripped in front of their children. Officers grab anything they have on them, even childcare materials (e.g. nappies)”

The whole thing sounds ultra-professional – there are testimonies to special areas  been used for such practices, special transport vehicles, complete secrecy, in short a military-like organization with plenty of money flowing in.

In Croatia, the investigation documented violent and illegal push-backs on the border with Bosnia. Masked men force asylum seekers into the over-flowing river while shouting “Go to Bosnia”. They were clearly wearing uniforms of the Croatian police’s Order Restoration Units. But what is most disturbing is the masked men’s profile, based on the investigation:

“The upper ranks of the unit are partly manned with war veterans who fought against Serbian troops in the 1990s. Some of the men appear on Instagram and Facebook with right-wing extremist and fascist symbols, others pose with their weapons at the border. Members of this special intervention police force receive extra salaries for their special duties against migrants at the border, usually hundreds of euros per month.”

Needless to say, we will not be surprised if there is confirmation that all these structures in the three countries have recruited their men from fascist, nationalist and far-right groups; it is well known that these repressive structures offer a warm embrace to such individuals.

As for the Romanian operations of refugee push-backs to Serbia, the investigation frames the Romanian police and Romanian border guards as masked men.

Keeping up the appearances with delay

It seems that the bureaucrats from the directorate of the EU have found a way to help the Greek government to cover up its brutal methods. According to an article in the Greek conservative newspaper Kathimerini, the government is planning to entrust the National Transparency Authority with some kind of audit.

What is this Authority? We only need to mention that its General Director is a good friend of Mitsotakis; and that out of the 6,375 complaints that the Authority has received since it was put in place by the ND government, only nine have found their way to some kind of audit exercise!

Refugees have nothing to expect from the Greek “transparency” authority or from the EU officials. They may now appear to have been pushed into a corner by the revelations, but they are certainly planning a cover-up operation.

The only forces migrants and refugees can trust are the antiracist and antifascist movements, solidarity structures from below and in general the working class and the militant trade unions of the base, youth and the popular strata that on many occasions have shown their willingness to help them. This is the only way to build a united movement of immigrants/refugees and local people against the policies that suppress the rights of all of us.

Workers and youth all over Europe need to fight and put forward demands, such as:

Share
Facebook
Twitter
WhatsApp
Viber
Email
Previous article6/11: All out against climate change and environmental catastrophe!
Next articleCOP26: Public meeting in People’s summit “Keep It In The Ground”