Australia: Support from commuters is appreciated by the Union of Railway workers 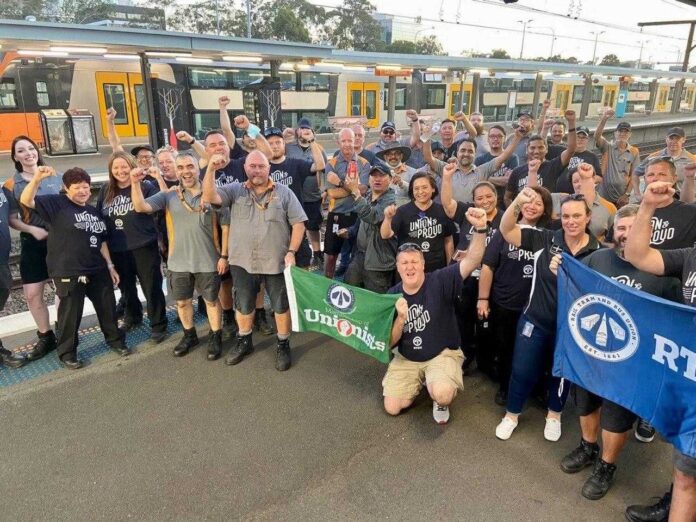 A campaign by the union of railway workers has finally compelled the New South Wales (NSW) Government to agree with fare-free days for everybody. This will be applicable for 12 days across all modes of transport, commencing from 4:00 am 14 April 2022 to 3:59 am Tuesday 26 April 2022.

However, in a recent media release, the government has shown that it is trying to hijack ownership over this fare-free initiative. They did not mention a word about or offer any transparency on how this decision was made and how fundamental the unions were in the success of the campaign.

On April 20 and 21, 2022, members and supporters of the Railway Union flocked the streets and distributed pamphlets to explain their motives and highlight their roles in initiating the decisive action.

The capitalist right wing “Liberal” government of New South Wales, and their international political affiliates, tend to rank humanitarian action as a low priority. The people deserve to be heard and taken seriously in the current sensitive and challenging global situation. Major economic shifts are looming due to the pandemic and the Russia/Ukraine conflict, and sadly most of us are now sensing that it is less of a theoretical problem and more of a practical one. Fuel and commodity prices skyrocket while wages remain the same.

Government officials lament the lack of funding, but at the same time, the Governor of New South Wales, Dominic Pratt, has allocated A$750,000 in bonuses and overtime pay to the Liberal and the Nationalist members of Parliament.

The unions’ campaign responded to the dangerous tactic of trying to turn the public against rail workers by the NSW government on 22 February 2022.

Over nine months, the rail workers negotiated to stop the privatisation of services and ensure a safe and clean rail network. However, instead of responding to the justified demands of the workers, the government made another decision. During the peak period on the morning of 21 February 2022, when commuters were going to work or school, they faced locked doors at all stations and could not use the railway system. The NSW government cancelled all train services and locked out its workers from doing their jobs. Following this aggressive and unnecessary action, in a media smear campaign, the government blamed the workers for having caused massive disruption in people’s daily lives and work.

Chain analysis of the events in the last few days before the locking down on 21 February 2022 reveals the government’s dirty trick. It shows how they were attempting to manipulate the public sentiment against the workers and pit different layers of the community against each other.

On 15 February 2022, NSW Transport, in a meeting with unions, promised to provide an offer on the union’s priority claims in two days and assign a negotiator that is respected by both sides.

Despite the agreement mentioned above, on 20 February 2022, the NSW Government broke the promise and re-filed to terminate workers’ right to take industrial action, despite the independent Fair Work Commissioner expressing dissatisfaction. As a result, the commissioner scheduled a hearing on Monday morning.

21 February 2022, at approximately 1:00 am, Management cancelled all train services, and when the workers arrived at work to perform duties, they were faced with locked gates. At the same time, the government and media commenced a smear blame game, accusing workers of having caused this disruption.

We know the dirty tricks of the capitalist governments against workers are not new and is common worldwide. Obviously, in this case, if we do not say they have intentionally caused chaos to manipulate the public and media against the rail workers, at least we can say they have no competency in managing the railway system.