Romania: protests on 25th of March against climate crisis and war 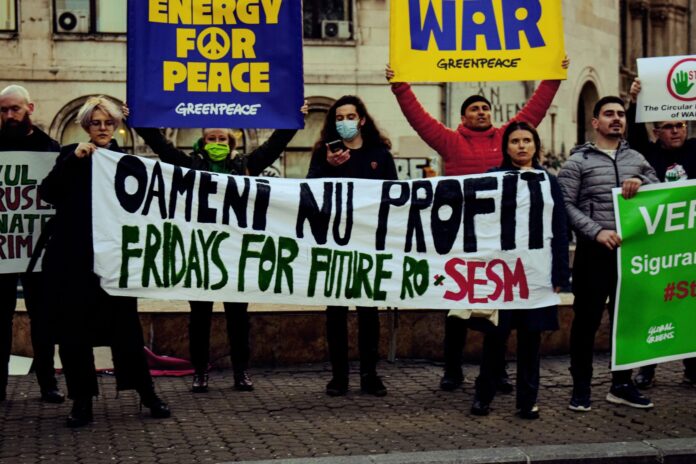 Mihai Ghionea, member of Fridays for Future in Romania

On the 25th of March this year a series of marches concerning climate change took place all around the world. These protests are part of the Fridays for Future movement, the one started by Greta Thunberg in 2019. Over 230 such manifestations took place in Europe alone. In Romania, the fairly new Fridays For Future Romania organization held two such marches. One in Cluj and one in the capital city of Bucharest, with the main title of the protest being “Oameni, nu profit” (People not Profit).

The protest in Bucharest was held in front of The Faculty of Geography at the University of Bucharest, pretty much in the heart of the city. Although the attendance was of around 50 people, the crowd consisted of every age group, ranging from high school students to adult activists.

The main point of the protest was to relaunch for good the Fridays For Future organization in Bucharest. This branch of FFF was founded during 2019 but disappeared from the public sphere during 2020 due to the covid pandemic and the subsequent lockdown. The organizers had a clear message: Climate change cannot and will not be stopped unless the whole socio-economic system that we live in, capitalism, will disappear. Thus one of the slogans of the protest was “System Change, not Climate Change!”. The students that participated even took to the scene and spoke about their concerns, their fears about the future and made their pleas heard.

Adding to that the whole Ukraine situation, it looks clear that we cannot wait any longer for those in power to act against climate change. One of the consequences of the war in Ukraine and the escalating energy crisis is the rising use of coal and oil for energy production, but also the discussion for more nuclear energy.  We can see that “environmental sensitivities” are collapsing and even the modest goals of COP26 targets thrown away.

The youth will have to continue to organize and to protest for the change they want to see in the world. The future is ours and we don’t want to live in a dystopian world just because the big capitalists that have all the power and wealth decided to be ignorant and to exploit the planet for their profit, while we, the young and poor, are the ones to suffer.

In a way, by demonstrating against the government on the issue of climate change, the young people from Bucharest and Cluj are making their voices heard. Even though they are now just a handful of young students, they wish to create a mass grassroots movement of pupils, students and working class people that links the climate change problem to other systemic problems in our world, such as housing, wealth inequality, colonialism, racism and war. They even had a 10 point program that they presented in front of the people gathered in front of The Faculty of Geography:

We see the 25th of March strike as a new starting point to rebuild the movement  in Romania. We hope that this is the beginning of a new environmental movement, as well as a call to the masses to join the fight for a better and healthier future!