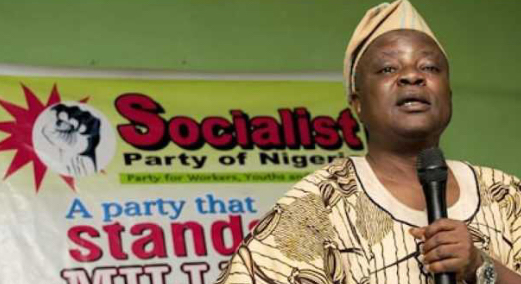 Today, Tuesday, May 26, we learned the news about the death of comrade Segun Sango. We hereby publish an obituary written by comrade Dimeji Macaulay. The editorial board of Internationalist Standpoint and all comrades of our initiative express our condolences to his family, comrades and friends.

Segun was a leading member of the Committee for a Workers International and a founding member of its Nigerian section for decades. He made a huge contribution to the building of a sizable revolutionary organization in Nigeria, facing great difficulties and challenges. Regrettably, because of the wrong methods of the CWI leadership, this historic current faced multiple splits, both internationally and in Nigeria.

Segun was facing a serious illness during the last period of his life. His legacy, that of a dedicated working-class fighter, will live on.

In the early hours of Tuesday, May 24, we received news of the physical departure of comrade Segun Sango. With deep pains and sorrows, we join his family members and comrades locally and internationally to mourn his loss.

Segun Sango was a true fighter for the world, Africa and Nigeria; a brilliant lawyer and a consistent socialist revolutionary; a firebrand Marxist; a humanist and a defender of the working class.

It will be difficult to talk about Segun Sango without also mentioning comrade Lanre Arogundade, his friend and comrade for about four decades. On May 5th, Lanre Arogundade received the Defender of Press Freedom Award by the Nigeria Union of Journalists. These two comrades and seven other young people formed the Militant in 1987, later to be renamed as Democratic Socialist Movement (DSM), the organization that has successfully registered the Socialist Party of Nigeria (SPN).

They both struggled as student leaders from 1982-1983 to resist the anti-poor policies of the ruling class in Nigeria, most especially the Buhari/Idiagbon regime from December 1983 to January 1985. They were the ones leading the struggle against commercialization of education and in support of workers’ struggles. Arogundade was the president of the National Association of Nigeria Students (NANS), after serving as a member of the student parliament and also the Secretary General of the University of Ife student union, now called Obafemi Awolowo University (OAU).

Segun Sango was also a leading student activist on campus. Under their leadership, with the support of other pro-people organisations, they organised a lecture boycott that nearly caused the collapse of the Buhari/ Idiagbon regime in 1984. Segun Sango and a few others were arrested for unlawful assembly, and it was Lanre Arogundade who went to the press to call for their release. They were released after four days in detention.

In fact, in those days the student movement was so powerful that they gave the supreme military council an opportunity to fix a day, time and venue, for a meeting to discuss demands of students before the lecture boycott can end. Segun Sango was the one who travelled up north to mobilise students in Bayero University Kano (BUK) and Amadu Bello University (ABU). The students who led those struggles are a generation that one must be proud of. They played an important role against the Ibrahim Babangida regime, against the implementation of the structural adjustment programme (SAP) and the annulment of the June 12, 1993, general elections.

Segun Sango was also an anti-dictatorship veteran, he was detained along with other pro-democracy activists by the General Sani Abacha regime, and was later released after the death of Abacha.

I met Segun Sango sometime around August 2009 at a socialist school organised by the Democratic Socialist Movement (DSM) in Benin, Edo State. I was just a young radical student without a Marxist understanding. The lead-offs by Segun Sango and AJ Dagga were very inspiring and sparked a new turn to my student activism. I always read the website of the DSM, where many articles and press statements were posted, mostly issued by Segun Sango as the General Secretary of DSM.

Segun Sango stands out as a consistent fighter and a practical Marxist, both in lifestyle and in his relationships with people. Because of this he played a pivotal role in the registration of the National Conscience Party (NCP). It was under his leadership in 2003 that the party had its best history in Lagos State. Unfortunately, the party was taken over by right wing elements, which led it to adventurism.

The role of Segun Sango in the struggle for registration of the Socialist Party of Nigeria (SPN) cannot be understated. He was a founding National Chairman of the SPN. One of the memorable days was the day Segun Sango himself appeared before the judge and the court, on March 3, 2015. The presiding judge, Justice Kolawole Gabriel, recognized Segun Sango as his old schoolmate in the 80s, and was surprised this comrade is still in the struggle to end capitalism. Still, even though this judge was open to create some personal relations, Segun never made the attempt to call him until we won the court case in November 27, 2017.

Segun Sango had a broad mind, and he believed that everyone is needed to fight this deadly system and it is only by unity that we can fight and win.

Today, Segun Sango took a bow after long protracted illness. His works and contributions to the struggle for a socialist world will continue to inspire the younger generation. He was a builder, an organiser and Marxist teacher.

Most of the time I can’t help but quote Segun Sango when I make public speeches. I also can’t help but laugh when I remember the moments we spent together in Agbotikuyo, before I moved to Abuja. I wish I was able to see him to say goodbye before he took his final breath.

Segun Sango will be an inspiration to different generations. We join comrades, family and friends to say goodbye.

Below are some inspirational quotes by comrade Segun Sango.

“Even though our problem is huge, the way to solve it is simple. The first thing is to make sure that the society’s wealth is collectively owned and democratically-managed in order to avoid the pitfall of the former Soviet Union. In the former Soviet Union, they nationalised the economy and collectivised the land and for a time, it worked. The former Soviet Union was as backward as India compared with the United States of America as at the time of the revolution and within a period of one generation, it became the second most developed country all over the world. But one of the founding fathers of the revolution, Leon Trotsky, warned that a nationalised economy requires workers democracy to function effectively for the good of all. A combination of the lack of workers’ democracy and the rise of Stalinist authoritarianism eventually led to the collapse of the former Soviet Union and East European governments.”

“This is not a society we can bequeath to our children so this is a clarion call for social transformation and revolution. We need a determined working class party that people can believe in. The task may be difficult but as the Chinese say ‘the journey of a thousand miles begin with a step’. We have to begin today otherwise, the current generation will be worse for it. Militancy will increase as well as kidnapping, ethno-religious conflict etc. Things will get worse. So there is not going to be a way out for Nigeria on the basis of capitalism. Our task is difficult, so we should begin to squarely face it. We need a party of the people. The antidote to Nigeria’s problem is public ownership of the commanding heights of the economy under working class democratic control and management”.

“A nation that is well endowed with human and material resources but perpetually held down in a state of coma is an absurdity that cannot be rationally justified unless you believe in the irrationality of the capitalist system”.

Share
Facebook
Twitter
WhatsApp
Viber
Email
Previous articleThe energy crisis and the renewed interest in fracking
Next articleEngland: TUC Demo June 18- building for the protest and the problems of leadership