May Day, nationwide teachers’ protests and arrests in Iran

By Internationalist Standpoint
May 8, 2022 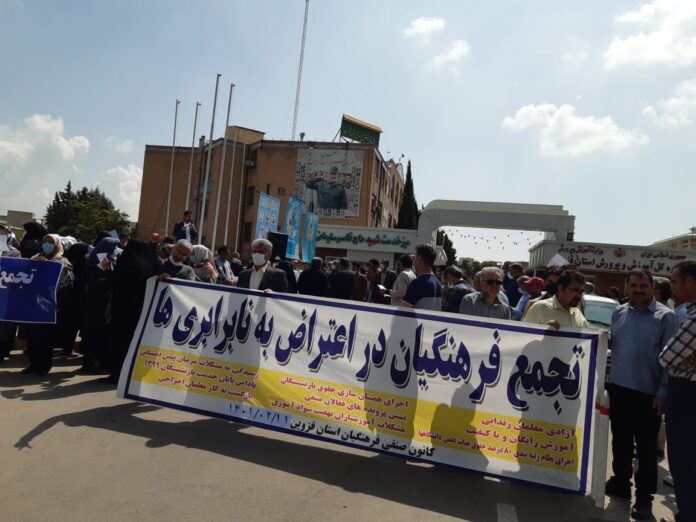 We publish a report by the Shahrokh Zamani Action Campaign

The Iranian regime once again showed its fear of the country’s teachers by arresting many of their activists on the night of April 30th. This was yet another intimidation tactic that was meant to deter teachers across Iran from once again protesting against low wages and other basic demands on May Day and Teachers’ Day (May 2nd). The new detainees joined the ranks of many teachers’ activists who were already in jail.

However, this dirty trick did not work. On May Day many thousands of teachers in dozens of towns and cities joined other workers protesting and commemorating International Workers’ Day. In many towns the demonstrations were attacked by riot police, Pasdaran and Intelligence Ministry agents – with the assault in Bushehr being one of the most violent.

The April 30th and May Day arrests brought the total number of arrested and jailed teachers to around 40 people. Yet the teachers protested again the next day, Teachers’ Day.

Since 2021 Iran’s teachers and educators have had a series of nationwide demonstrations, including on February 19th and April 21st 2022. They have protested against the lack of progress in enacting the teachers’ job classification scheme provisions, including uprating their pay to 80% of the salaries of university faculty members. They have demanded the full implementation of the teachers’ classification scheme law, which will equalise and improve the pay of teachers and educators. Other demands included the release of jailed teachers and free education for all children (as guaranteed by Article 30 of the Islamic Republic of Iran’s Constitution).

There are now thought to be at least 12 teachers behind bars:

Three of them – Esmail Abdi, Eskandar Lotfi and Masoud Nikkhah – are currently on hunger strike. Today, May 7th, is the seventh day of their hunger strike.

We call on all trade unionists and socialists to send solidarity messages in support of Iran’s jailed teachers and to demand their immediate and unconditional release.