March 2-6, 1919: The Founding Congress of the Communist International 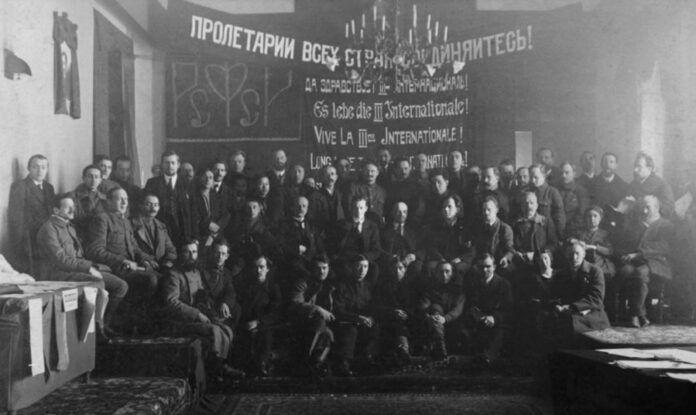 The first congress of the Communist International (Comintern) took place at March 2-6, 1919. Fifty-three delegates from 29 countries gathered in Moscow for the occasion. The Congress represented a turning point for the working class movement.

The Congress was convened less than 2 months after the suppression of the German January Uprising and the assassination of the revolutionary leaders Rosa Luxemburg and Karl Liebknecht. There is hardly any document of the Congress in which the names of both are not mentioned.

The agenda of the Congress was as follows:

1) constitution
2) reports
3) policy statement of the International Communist Conference
4) bourgeois democracy and dictatorship of the proletariat
5) the Berne Conference and attitude toward socialist trends
6) the international situation and the Entente’s policy
7) Manifesto
8) White terror
9) elections to the bureau and other questions organization.

Although most of the delegates represented small revolutionary groups and parties, with the notable exception of course of the Russian Communist Party and the German Communist Party (KPD), the Comintern was founded with the perspective that the conditions for the world revolution had matured. This was expressed in Lenin’s opening speech and in almost all the Congress documents. Lenin, in his opening speech on March 2, emphasized that the conditions which emerged after WWI were favourable for the revolutionary movement of the working class as it started and grew in almost all countries.

The platform of the Communist International underlined that a new era was emerging in the sense of the process of disintegration of capitalism and therefore the era of communist revolution of the working class was opening up. The Congress Manifesto emphasised the tasks of the newly found International were to contribute to this process in order to promote the victory of the revolution:

“Seventy-two years ago the Communist Party proclaimed its program to the world in the form of a Manifesto written by the greatest heralds of the proletarian revolution, Karl Marx and Frederick Engels. Even at that time Communism no sooner entered the arena of struggle than it was beset by baiting, lies, hatred and persecution of the possessing classes who rightfully sensed their mortal enemy in Communism. The development of Communism during this three-quarters of a century proceeded along complex paths: side by side with periods of stormy upsurge it knew periods of decline; side by side with successes – cruel defeats. But essentially the movement proceeded along the path indicated in advance by the Communist Manifesto. The epoch of final, decisive struggle has come later than the apostles of the socialist revolution had expected and hoped. But it has come. We Communists, the representatives of the revolutionary proletariat of the various countries of Europe, America and Asia who have gathered in Soviet Moscow, feel and consider ourselves to be the heirs and consummators of the cause whose program was affirmed 72 years ago. Our task is to generalize the revolutionary experience of the working class, to purge the movement of the corroding admixture of opportunism and social-patriotism, to unify the efforts of all genuinely revolutionary parties of the world proletariat and thereby facilitate and hasten the victory of the Communist revolution throughout the world.”

From the First to the Third International

Karl Marx and Friedrich Engels were of the opinion that socialism would be realised on an international scale. Marxists always strove to create international organisations as an integral part of the struggle for the emancipation of humanity.

“That the emancipation of labour is neither a local nor a national, but a social problem, embracing all countries in which modern society exists, and depending for its solution on the concurrence, practical and theoretical, of the most advanced countries;”  (General Rules of The International Working Men’s Association, 1864)

The First International, which was initially founded under the name International Workers Association in 1864, ended in a split between Marxists and Anarchists and eventually dissolved after the defeat of the Paris Commune.

The Second International was founded in 1889 and it included the mass working-class parties of the period. However, when the WWI broke out in 1914, the leaderships of its parties, especially of the German Social-Democratic Party (SPD), which was the largest workers’ party internationally, ditched their anti-war position and sided with the bourgeoisie of their own countries. This, in essence, meant the death of the Second International as a revolutionary formation.

“Recognizing the world character of their tasks, the advanced workers have from the very first steps of the organized Socialist movement striven to unify it on an international scale. The beginnings were made in 1864 in London by the First International. The Franco-Prussian War out of which emerged the Germany of the Hohenzollerns cut the ground from under the First International and at the same time gave impetus to the development of national workers’ parties. As far back as 1889 these parties came together in the Congress of Paris and created the organization of the Second International. But the center of gravity of the labor movement during that period remained wholly on national soil, wholly within the framework of national states, upon the foundation of national industry, within the sphere of national parliamentarianism. The decades of reformist organizational activity gave birth to an entire generation of leaders, the majority of whom recognized in words the program of the social revolution but renounced it in deeds, becoming mired in reformism, in a docile adaptation to the bourgeois state. The opportunist character of the leading parties of the Second International has been completely disclosed; and it led to the greatest collapse in world history at a moment when the march of historic events demanded revolutionary methods of struggle from the working-class parties. If the war of 1870 dealt a blow to the First International, disclosing that there was as yet no fused mass force behind its social-revolutionary program, then the war of 1914 killed the Second International, disclosing that the mightiest organizations of the working masses were dominated by parties which had become transformed into auxiliary organs of the bourgeois state!”(Comintern Manifesto).

Bourgeois world order has been sufficiently lashed by Socialist criticism. The task of the International Communist Party consists in overthrowing this order and erecting in its place the edifice of the socialist order…” (Comintern Manifesto)

From the Zimmerwald Conference to the Third International

Within the Second International, three currents developed over time. The “social chauvinists” who betrayed the working class constituted the majority. They were responsible for the suppression of the German Revolution and the murder of Karl Liebknecht and Rosa Luxemburg. The “centrists”, consisting of the social pacifists like Kautsky and the German Independent SPD (USPD). Finally, the “communists” who were putting forward the approach to transform the imperialist war into a revolution for the benefit of the working class.

After the betrayal of 1914, the anti-war “centrists” and left wing (the “communists”) of the  Second International gathered at the Zimmerwald Conference on September 5-8, 1915, near Bern, in Switzerland. The Conferrence was attended by 37 delegates from 12 European countries. This Conferrence and a second one convened in Kienthal a year later, were very important steps on the direction of the founding of the Third International.

However, the “centrist” wing had a reactionary and restraining role in the revolutionary period at the time. As a matter of fact, they attempted to revive the Second International by holding a conference in Bern on February, 1919, just one month before the founding congress of the Communist International.

In the founding congress of the Communist International two documents adress this issue.

“The Zimmerwald and Kienthal conferences were of importance at a time when it was essential to unify all those proletarian elements ready to protest in any way against the imperialist slaughter. But the Zimmerwald Association, besides including men and women of a clearly defined Communist orientation, attracted other wavering, pacifist and ‘centrist’ socialists, who were – as the Berne conference has shown – forging an alliance with the social-patriots to wage a struggle against the revolutionary proletariat. Thus, Zimmerwald was being exploited in the interests of reaction.”(Declaration of the Participants in the Zimmerwald Conference)

“The Congress of the Communist International regards the “International” which the Berne Conference is trying to set up as a yellow, strike-breaking International which is and remains only a tool of the bourgeoisie.

The Congress calls upon the workers of all countries to take up a determined struggle against the yellow International and to save the broadest masses of the proletariat from this lying and deceptive International.”(The Attitude to the ‘Socialist’ Currents and to the Berne Conference)

The fate of the Comintern

Lenin in his closing speech said

“The victory of the proletarian revolution on a world scale is assured. The founding of an international Soviet republic is on the way.”

But the prediction of Lenin did not come true as such at that time. And there were concrete reasons for this.

The Comintern could not escape from the bureaucratisation process that emerged in the Soviet Union. After Lenin’s death, and the defeat of the forces around Trotsky in the battle with the Stalinist wing, the Comintern entered a period of degeneration.

All the power fell into the hands of a bureaucratic clique rotating around Stalin, and the Comintern’s goal to organise the world revolutionary movement was cast aside. After the fourth congress, especially after Stalin introduced the theory of “socialism in one country”, all the policies of the Communist International were shaped in line with the foreign policy and interests of the Soviet bureaucracy. The cost that the world working class had to pay was extremely heavy. From the approach that the Soviet Union could be sacrificed for the sake of the world revolution, which Lenin had, Stalin introduced a policy in which the world revolution was sacrificed multiple times in the altar of the interests of the bureaucratic caste in the Soviet Union. The Stalinist polices in China, Germany, Spain, Greece, just to name a few, led to huge historic defeats for the working class. This was obviously reflected on the internal regime of the Comintern, which from a vibrant and democratic International became a conveyor belt to tranfer the “line”, decided in Moscow, to the sections.

Today, while war, exploitation, poverty and all the contradictions of the capitalist system continue to exist at every level of society, there is a burning necessity of an international organisation in the struggle against it. In the struggle to create this irreplacable tool, the history of the Third International contains tremendous

Share
Facebook
Twitter
WhatsApp
Viber
Email
Previous articleClara Zetkin: Only in Conjunction With the Proletarian Woman Will Socialism Be Victorious
Next articleThe origin of women’s oppression