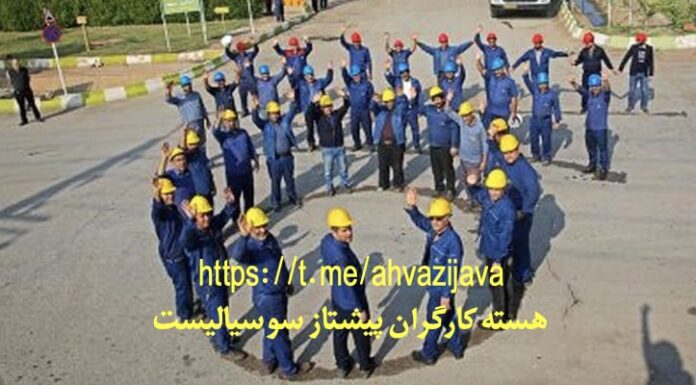 The following is a message by the Khuzestan Vanguard Socialist Workers’ Cell published on November 5th 2022. Re-posted from Shahrokh Zamani Action Campaign

In the past 43 years, the ruling class of the Islamic Republic of Iran has plundered the fruits of workers’ and all toilers’ drudgery and mowed-down the lives, existence and labour power of the working class and the poor. This government, by stealing the daily bread and water and existence of society, has not created anything but misery, marginalisation, sleeping in graves, disease, the spread of addiction, destruction, drought, death, massacre, displacement, social insecurity, state terrorism, war-mongering, corruption and so on.

This nationwide uprising of the Iranian people, which started with the death of Mahsa Amini, has made the government helpless. And it has shown how cruel and corrupt the regime is, and that the regime does not value the Iranian people in the slightest. In these uprisings the rebellious masses have no fear of the regime’s repressive forces. And the masses want the overthrow of the corrupt government of the Islamic Republic. The wave of solidarity, sympathy and communion of the cities with each other is increasing every day. More than ever before the slogans are negating the existence of the regime.

The capitalist regime of the Islamic Republic, caught in the vortex of economic and political crises, is now deadlocked and panicked, and is facing an uncontrollable and nationwide uprising. The uprisings of December 2017-January 2018, November 2019, the summer of 2021, May 2022 and September 2022, which is still ongoing, are posing the objectivity of the class struggle with radical slogans.

This inextinguishable uprising and nationwide solidarity that is approaching the revolutionary overthrow of the Islamic government, with a general strike of workers, students and businesses, with the solidarity of the urban and rural poor and only with organising workers’ strikes and the conscious leadership of the working class can [achieve] a socialist government.

We, the vanguard socialist workers of Khuzestan, call on all workers and deprived sections of society to expand these protests and strikes to effectively intervene in these developments in order to establish a socialist government based on freedom and equality and a government of workers’ councils, where the working class runs its affairs.