IWD2022: Women’s oppression propels them at the forefront of struggles 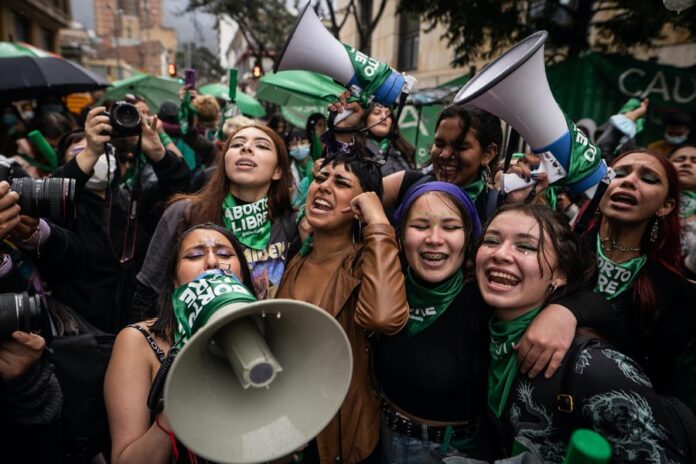 Women’s oppression and exploitation in capitalism

Patriarchy, as a social construction, existed well before capitalism. It was maintained and further developed in capitalism, as it promotes division among the working layers and, in this way, it is very useful for the class possessing the means of production to increase their profits.

Capitalism’s core objective is for the ruling class to exploit the workers, so that it manages to accumulate profits and wealth. Oppression is a necessary tool for exploitation. According to the patriarchal system, which is a very efficient tool for oppression, women and LGBTQ+ people are considered inferior and therefore deserve having fewer rights. In this way, they are of course more easily exploited. Patriarchy is basing this oppressive mechanism on stereotypes created for each gender: a man has to be tough, never cry, endure pain and be a provider for his home. A woman has to be tender and caring, talk little, be humble and her main purpose is to be a mother and raise children. Those who fail to fit in these stereotypes are marginalised and even expelled from society.

This stereotype is very profitable for capitalism. Women are exclusively responsible for the reproduction tasks because of their supposedly tender and caring nature: giving birth to children and raising them, taking care of the household, as well as the weak and sick members of the family and all reproductive tasks are considered female duties. This amounts to a huge quantity of unpaid work, which translates into more profits for the ruling class. At the same time, women are also employed, but usually on lower wages. Most “female” jobs are low-paid (nurses, teachers, social assistants), whereas women are often on part-time and flexible contracts, in order to save time for the household chores. As a result, women’s financial situation is generally precarious, and therefore independence and emancipation is very difficult for them.

Gender oppression and violence in times of crisis

If the above is generally true in times when the system is more or less stable, the situation becomes even worse when there is a crisis. The ongoing economic crisis, aggravated by the pandemic, provides a good example for that. Financial problems create stress, tensions and a toxic ambience in households, which often result in gender violence. Greece is a very good example: domestic violence has dramatically increased during the years of the financial crisis, according to scientific research. So has prostitution, which was the only way for many women to get besic things like food and medicine.

Gender and sexual violence are based on the fundamental principle of patriarchy, that every woman belongs to a man: a father, a brother or a husband. In this sense, women are supposed to obey these men and satisfy their needs and wishes. If they refuse or fail to do so, the patriarchal mentality leads men to consider it legitimate to impose themselves with violence and eventually even kill a woman. Control over women’s bodies and lives in capitalism also affects reproductive rights. Women are supposed to have a “mission” to bring children to life -therefore abortion and contraception are illegal in a wide range of countries. This is a fundamental way of controlling women in many ways: having a child when the time is not right for them or against their will can block their mental, social and professional development. Sometimes it may represent a risk for their health and even life.

As the financial and social crisis is deepening, we see an attempt for a general drawback to conservative values. We can observe a significant pressure on reproductive rights in several countries: abortion rights have been restricted in Poland and in several states of the US, while various systemic entities, like the Orthodox church, are organising campaigns in an orchestrated attempt to reopen the debate in Greece, where abortion is legal since 1983.

Gender based violence is not exclusive to one country. It happens everywhere, regardless of religion, political system or wealth. It is the practical result of the principle that women are an object possessed by a man. The objectification of women is also a source of profit: apart from prostitution and trafficking, industries likes cosmetics, clothing and advertisement, are making huge profits by using women’s bodies as objects, while putting too much psychological pressure on them in order to fit in a restrictive stereotype of beauty.

Movements against women’s oppression on the rise

All these years, and even centuries, of oppression would eventually result in awareness and mobilisation. More than a century ago, the Russian revolution took pioneering measures to the benefit of women and LGBTQI+ persons, some of which seem to be utopic even in today’s most progressed societies. This happened because Marxists understand that women’s struggles are tightly linked to the workers’ struggles for social justice and system transformation.

In recent years, we have witnessed very important movements around gender and women’s rights. The movement Ni una menos against femicides in Argentina was among the most important ones in Latin America. Mexico, Brasil and other countries of this continent followed, whereas Argentinian women achieved the legalisation of abortion in their country two years ago, after more than 10 years of struggle. Important mobilisations were organised in Poland, when the government attempted to limit reproductive rights in 2020, where the workers’ movement supported the women’s movement. Abortion became legal in Ireland in 2018, after a long struggle.

These movements have deepened the radicalisation of women and LGBTQI+ people. It was through these important struggles that they became conscious of the injustice that is done to them and got empowered. This is why we have seen women come forward, take initiatives and even lead important movements and revolts across the world: Chile, Lebanon, Sudan, Iran, Myanmar. Young women also played a leading role in the international youth movement against climate change.

Social transformation is absolutely necessary for women and other oppressed groups to achieve long-standing emancipation. We engage in struggles, knowing that the ruling class will concede rights and benefits, only under extreme pressure and only for as long as they do not feel powerful enough to take them back.

It is pretty clear that what is basically missing in women’s everyday life is time, basic social policy infastructure and a sustainable income. Reproductive work and child care would need to be dealt with collectively, by society. Working less in order to have enough time for self-development and for contributing to the community is necessary; services like public transport, health and education being of good quality and low cost is crucial to this purpose.

The women’s movement has a long list of demands, even though important battles have been won. Decreasing the working time on the same salary, quality public transport for free, public health and education need to be adopted as demands in our current struggles. These should be coupled with demands about stopping gender-based violence and attacks on women’s freedoms. Some of them have been won in certain countries. It is absolutely necessary to discuss these things and raise awareness about them in our workplaces, schools, and neighbourhoods. It is also necessary to put pressure on the workers’ movement to adopt these demands and fight for them. Creating links between the women’s movement and the wider workers’ movement and other social movements is a burning need, not only because unity makes us stronger, but also because feminist demands are totally relevant to the whole working class.