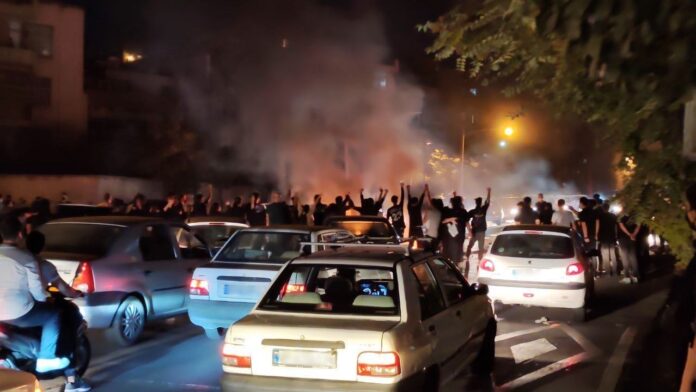 Interview with Morad Shirin, from the Iranian Revolutionary Marxist Tendency

After more than two weeks of systematic repression, with more than 200 deaths and many thousands of arrests, the Iranian masses are still staging protests throughout the country. There are clashes with the riot police and other repressive organs of the capitalist state every night, particularly in the bigger cities and areas where national minorities are predominant – especially Kurds, Baluchis and Arabs.

Several social media platforms, including Instagram and WhatsApp, have been blocked and in many parts of Iran the internet is either shutdown or its speed has been severely reduced. This obviously reduces the amount of information, particularly photos and video clips, that can be sent abroad.

The bourgeois media in Europe is also playing a double game: they claim to support the mass movement in a general way, especially in relation to women claiming their basic rights, but they boost the most right-wing elements of the opposition, mainly the monarchists. This is part of their long-term policy of keeping this most reactionary form of capitalist dictatorship intact –in particular with ensuring the stability of capitalist exploitation in Iran– but to extract concessions from the regime.

There are many women involved – and not just young ones. There is also wide participation by the youth and other people who have had enough of enduring over four decades of daily repression, economic hardship, corruption and tyranny. The protests have been most violent in areas with mainly Kurdish, Baluchi and Arab populations. During the past few days, the regime has attacked Kurdish organisations based in Iraqi Kurdistan, accusing them of inciting the protest in Iran’s Kurdish provinces. These have caused many deaths and injuries.

Most protesters now see the connection between the regime’s policy of oppressing women’s basic rights and its general repressive character, suppressing every class and layer of society: whether in the streets, at school and university, in the factories and places of work, and especially, in any dealings with the capitalist state or any of its repressive organisations.

There are many layers involved and the movement is constantly evolving. In the past few days students at over 100 universities have gone on a general strike.

We hope this will boost the confidence of all other layers to go on general strike, particularly the workers in key industries like oil and petrochemicals that are the regime’s lifeline.

The teachers have organised two nationwide protests, as they have many times during the past year, but other workers – crucially the oil workers – have so far merely issued warning statements. There is great discontent among workers about the repression and the economic crisis but the necessary self-confidence and revolutionary perspective to intervene to change the balance of class forces is not yet present.

There is a limited level of leadership and co-ordination in these protests, enough to continue them and in some cases to escalate them. But these activities by the youth, despite their tremendous courage, unfortunately, cannot in themselves make the decisive breakthrough which is necessary to bring the regime down and seriously weaken bourgeois state power in Iran. Only the working class, organised as a class, can do that.

The left, however we define it, plays almost no role in these protests. The huge majority of the left parties and organisations have no base within the working class. The divisions, the sectarianism, the tail-endism, the reformist outlook, and, especially, their lack of roots among the vanguard of the proletariat, mean that they just publicise the ongoing struggles abroad. They are mostly reduced to reflecting the same slogans and demands of the movements in Iran.

It would be a mistake to think that US imperialism is looking to overthrow this regime in favour of any other government that would be considered more pro-western! That is actually what the propaganda of the regime claims: hence any protests by workers, women, national minorities and so on, is said to threaten ‘national security’ and dealt with very severely.

US imperialism, although it has its differences (and sometimes even clashes) with the Iranian regime, knows that this unique form of capitalist dictatorship keeps the lid on the movements with heavy repression – thus prevents the workers, women, national minorities and the youth from realising even their basic rights. US imperialism is fully aware that over the past four decades this regime has been the best guarantor of capitalist relations of production in Iran and an important base for anti-working-class reaction in the whole Middle East. This is a role it will continue to play until it is overthrown in a proletarian revolution.

What US imperialism wants is to extract further concessions from the regime, even more than in the 2015 nuclear deal. The imperialists would risk a change of regime only if they had a viable alternative to it.

The outcome of this uprising, as those against the 2019-20 fuel price rises, or the earlier 2017-18 inflation protests, depends on what the working class does as a class. In those protests, as with all other ones previously or since, if the working class does not take part, or if workers participate as individuals and not as an organised force with their own slogans, perspective and organisational initiative, then the whole movement will be defeated. The workers need to intervene as a class for their own victory and to pose a revolutionary leadership for all other exploited classes and oppressed layers. There are only two alternative class leaderships possible: proletarian or bourgeois.

So far, we have had workers, like the permanent workforce of the oil industry, issuing statements threatening to go on strike if the regime does not stop the repression. What is needed is a general strike that links the struggles of workers in all the major industries together with the mass protests of women, youth and the national minorities. We need more workers’ organisations to take the same position as the Khuzestan Vanguard Socialist Workers’ Cell and start organising through their clandestine cells to make the general strike a reality.

We have to remember that it was not the street protests – even though they involved a quarter of the population – that overthrew the Shah in 1979. It was the general strike, particularly the oil workers’ strike that posed many political demands, that finished off US imperialism’s strongest base in the Middle East.

Given our limited numbers inside Iran, working under extremely difficult conditions of illegality, our main emphasis is the vanguard of the working class. We urge workers who have been at the forefront of organising strikes during the past few years to co-ordinate and link their struggles into a general strike. That way the workers can unite and win major victories in the class struggle, lead all other exploited and oppressed layers, as well as posing the question of state power. Workers’ strikes and the mass protests need to be linked under the same working-class leadership in order to achieve victory; if they remain separate then they won’t be able to avoid defeat.

Revolutionary working class leadership is and will be the key in any mass movement in Iran. If it does not exist, then despite all the heroism and self-sacrifice of the women, youth and national minorities –and any individual workers who join them– the movement will not succeed.

Share
Facebook
Twitter
WhatsApp
Viber
Email
Previous articleWhy the far right won in Italy. And whom they represent
Next articleTeacher’s day in Nigeria: fight for better education, wages and conditions