Interview with Fridays for Future in Romania 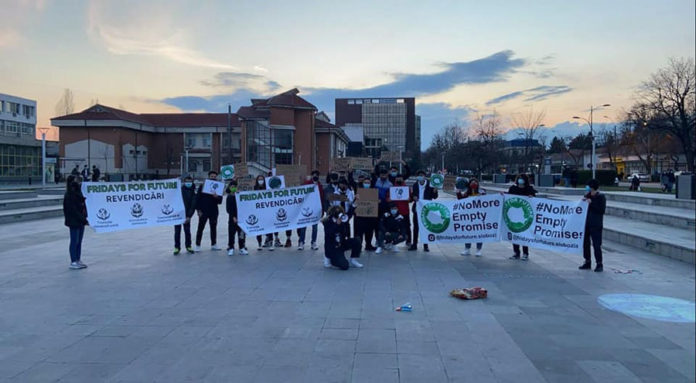 A relaunched group of “Fridays for Future” in Romania held its first meeting in Brasov on February 26 and 27. The group has its roots in the school students’ demonstrations against the climate crisis that developed in Romania during 2019. These demos were part of the international movement sparked by Greta Tunberg that took the name “Fridays for Future”. At the pick of the FFF movement in Romania (March 2019) more than 2,000 people, mainly school and university students, took to the streets of Bucharest demanding immediate measures against the unfolding climate crisis. In other parts of the country small protests were also held. The pandemic and the lockdowns did put a brake to this movement on 2020. But the “first seed” was planted. The experience of the FFF movement, the conclusions drawn for its potential but also the limitations of it and the understanding that climate crisis has its roots in the capitalist economic system of production and distribution are the starting point of this new initiative. Comrade Nikos Kanellis participated at the meeting in Brasov and spoke with Razvan Ghiuri, who is a highschool student, and Denis Flueran, who is a university student.

Q: What are the purposes of the group that was launched during the meeting in Brasov?

Denis Flueran: Our purpose consists mainly of reorganizing what has already been a climate-based organization, reorganize it on a class struggle foundation. Turn it into a left-wing movement that actually links the environmental issue with the other social problems that all the different groups are facing, problems of racism, problems of sexism, of homophobia, etc. We believe that all of these issues are linked and have a social basis. That’s why we met here, we want to reorganize on this foundation, and actually show the people how the climate crisis can actually be solved, how we should tackle this whole situation. We gathered people that understand the systemic roots of the problem.

Razvan Ghiuri: Some of the central aspects of our manifesto is that we cannot wait for the politicians to deal with the environmental issues in meetings like COP26. The Paris agreement, that has been advertised by the media is not respected by any country. So, instead of going to politicians and asking them to do something, we have to rely on the power of society. Politicians don’t want to change things that affect profits. They want to keep their political and economic power. So, we can`t expect change to come from them. The masses should be able to see the climate change as it really is, instead of the green washing and the false promises made by the leaders. We also demand climate education in schools. Our government did launch a project of climate education in which they invited environmental groups, including Fridays for Future. But it was also a green washing, just on a higher level.

Denis Flueran: Regarding the COP26 event, we can say that it was not any different than other events like it, we just saw again that our leaders are not willing to change anything, they are just postponing decisions for the distant future. This is pretty natural, because they are speaking for big business. Behind this are the interests of the big banks, the industrialists, who want to protect their profits and thus resort to pumping millions of dollars into lobbying. There have been some hypocritical changes, like the agreement for “gradual elimination” of coal-based industry, which has been changed to “gradual reduction” of this industry, but even this is being postponed to the distant future. They also aren’t providing any relief for countries that are directly affected by global warming.

Q: Tell us a few things about the Fridays for Future movement in Romania. How did it develop, what were its strong points and what were its limitations and weaknesses?

Razvan Ghiuri: When I joined FFF two years ago, the movement was composed by teenagers like me, around 17-18 up to 20-21 years old, with a fighting mood and a lot of potential to take different initiatives. It was also very united. These were the strongest elements of the movement. However, there were also weak points. A part of those school students that came in the movement didn`t take up responsibilities and became inactive. Another weak point was the lack of a particular direction and of a clear manifesto. There were basically three points. The demand for climate education in schools, the ban of fossil fuels until 2035 and stressing out the interconnections of all the problems in our society and the demand for social and climate justice. But they didn’t speak about the economy, which is the main cause of climate change.

Denis Flueran: I was not part of the first group of Fridays for Future during 2019-2020. So, I can`t say something for this. But as we make a new start, I think that we need democratic structures and ways to deal with any kind of disagreements that may come up.

Q: What are your plans of activity and campaign?

Razvan Ghiuri: The first point is the Global Day of Action on the 25th of March, with the main slogan «People over profit». It is an opportunity to launch our message to the public. After that, we are thinking that we need to have more school and university strikes in more cities, and to try to expand our group in more cities and help the ones that already exist to grow. We want to grow as a movement and try to educate people, on the fact that environment is not only about recycling. For example, I don’t think that there are too many teenagers who think about the economic aspect of the climate crisis.

Denis Flueran: We need to explain that the model of production is based on market relations, not on the planning of production. So, even if we switch to renewable energy, something that is far from certain, as long as production is profit driven, there can’t be any change. Every speech of politicians saying we need to switch to «clean» energy, is a hypocritical one, because they won’t give up on what is profitable for them.

Q: The meeting in Brasov is held during the first days of the war in Ukraine. Tens of thousands of Ukrainians try to escape war and have either passed or are stuck in the borders of Romania. What is your view of the war? What is the response of Romanian people to the refuge crisis of the moment?

Denis Flueran: The war itself is another result of our economic system and linked to environmental issues and other social issues, so we can’t turn a blind eye as a climate-based organization. We have to take this into consideration and see the largest picture in which everything is connected. So, we think that the war is just an attempt by the Russian oligarchy to break through the blockade placed by the imperialist powers of the west. This is just a fight between the different imperialistic blocks. On the one side you have NATO and on the other side you have Russia with its allies. Russia can play the energy card, as the West is running out of energy resources, but also the card of Donetsk and Luhansk regions.

Razvan Ghiuri: In Romania people are organizing to help the refugees who are coming from Ukraine. A lot of people post on Instagram that they are going to the railway stations at the borders with Ukraine bringing food to refugees, offering to accommodate them. There are also demonstrations against the war and donations to help the refugees. Not only at the borders, but also in other parts of Romania, refugees are being welcomed by the people.

Denis Flueran: One last point is that we cannot turn a blind eye towards the other bombings and wars throughout the world, like for example in Syria, Somalia, Yemen, Palestine etc. We must oppose all kinds of wars and conflicts, help the people in need, and also point out the fact that the war is not a result of Putin being mad or something like that. Putin is just speaking for big business, as well as everyone who has interests in Ukraine. At the same time, NATO wants Ukraine to join, in order to use it against Russia and gain from its resources.

Share
Facebook
Twitter
WhatsApp
Viber
Email
Previous articleThe New Deal of the 1930s, Keynes’s views and the capitalist crises
Next articleRussian revolution: what were its policies on women’s issues?