Greece: Support the AntinaziZone raffle for 2021! 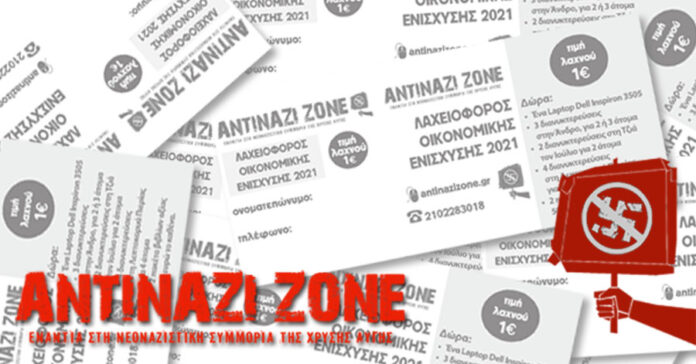 But at the same time, it’s becoming all the more clear that the fascists are planning their comeback. The events in the neighborhood of Stavroupoli, west Thessaloniki, where the fascists infiltrated schools and violently attacked left students and antifascists, acted as a reminder of what we have been saying from the very first moment: we are not done with fascism.

Nazis and other right-wing extremists are trying to regain their footing, to infiltrate schools, to take advantage of the general rottenness that prevails, in order to re-establish their presence and rebuilt their forces.

Our task is to stop them! The mobilization of 4,000 anti-fascists in of Stavroupoli sent out the loud message “fascism: never again”. This is not just a slogan but a political conclusion drawn on a mass scale from the historical experience of the movement.

At this juncture, Antinazi Zone-YRE is launching its annual raffle which aims to financially support our anti-fascist and anti-racist actions for the coming period.

We have been present in all the major battles of the anti-fascist movement over the past years. We were outside the courts for the conviction of the Golden Dawn Nazis, in the demonstrations for Pavlos Fyssas, in the campaigns of solidarity with immigrants and refugees. We actively participated in the Anti-Fascist Coordination of Athens-Piraeus and decisively helped the campaign “They are not innocent” to move forward. We provide continuous information on fascist issues and the anti-fascist movement through our website antinazizone.gr.

We appeal to friends & supporters of Antinazi Zone – YRE and to anti-fascists who believe that collectives like ours have a role to play and a contribution to make in this struggle, to support us financially.

The raffle will run until November 20 (at a time and place to be announced later) and there are a number of prizes, most of which are donations from supporters and friends:

Each raffle ticket costs 1€ and you can get them by contacting the Antinazi Zone facebook page https://www.facebook.com/Antinazi-Zone-547513058598742/  or by email antinazizone@gmail.com.

Support the fight against Greek fascists!