Greece: Strong message by the school students of Volos against waste incineration! 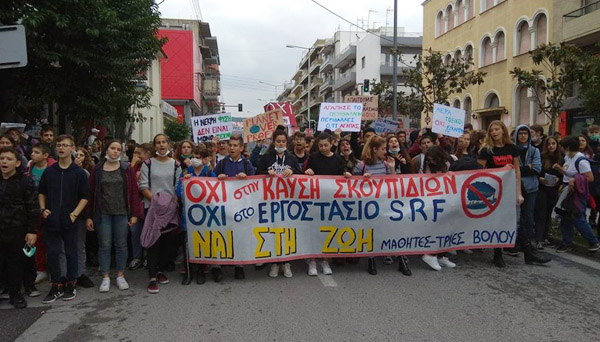 Report by Xekinima in Volos

Rhythm, liveliness, enthusiasm and impressive participation were the main features of the school students` demonstration on 21st of November against waste incineration by the Lafarge cement factory in Volos, against air pollution in the city, against the municipal authorities of Volos developing an SRF factory (to process garbage, by dehydration and condensation), and in favor of an ecological waste treatment in public ownership.

School students started to arrive at Liberty Square by 10:00am and shortly after, by 11:00am more than 2.000 school students begun to march in the main streets of the city. In many occasions older people passing by or watching the demo expressed their support by applauding the young protesters.

University students also took part in the demo together with teachers from the city’s high schools whose union had decided on a 3 hour stoppage to support the mobilization.  Fourteen schools out of twenty were also occupied by the students on the same day.

Undoubtedly it was the school students’ dynamism that set the tone of the demonstration. With drums, witty slogans, handmade placards, banners by a number of schools, placards of the “Youth Section” of the “Action Committee of Volos’ Citizens” the school students shouted that they want to live in clean environment.

Some of the main slogans were “Toxic air? No thank you”, “The air is polluted, education is expensive your growth is toxic”, “No to waste incineration for the profits of multinationals”, “In your system we don’t have health, we dream a different society”, “We want to make the world a better place, no to waste incineration”, “You talk of profits and losses, we talk of peoples’ lives” etc.

This mass and successful demonstration was the result of hard work by the Youth Section of the Volos’ Action Committee. The Youth Section held a series of open meetings and managed to organize a militant campaign weeks before the demonstration took place. During this period around 4,000 leaflets were distributed in most of the schools, hundreds of posters were put up, banners were placed and even a short video was created by the school students themselves. The mobilisation was well covered by national media.

Once again the local community and the youth have shown that they are fully aware of the great health risks posed by waste incineration and that they are determined to fight in order to stop it. It is also clear that the mass youth demonstrations against global warming and the mass upheavals in a number of countries have had an impact on Greek youth.

What needs to be done from now on is a democratic organization of the movement, based on a network of action committees in every school linked to the workers and other sections of the population in Volos and the surrounding region, and a well thought-out plan in order for the movement to continue the struggle with the aim to give an end to waste incineration. At the same time a clear conclusion must be drawn that the root of the problem is the system itself. Capitalism puts profit before the environment and public health. That is why it is necessary to organize and fight to overthrow the rule of private corporations.

Xekinima supporters played a very active role in the Youth Section, as they do in the city’s Action Committee. The whole idea of the school students coming out and for an all-out education strike was proposed by Xekinima supporters who are active in the Youth of the Action Committee. At the same time Xekinima raises the need to link to the working class and plan an all-city general strike, and of course stresses the need for a fight against the capitalist system and for a free and democratic socialist society.