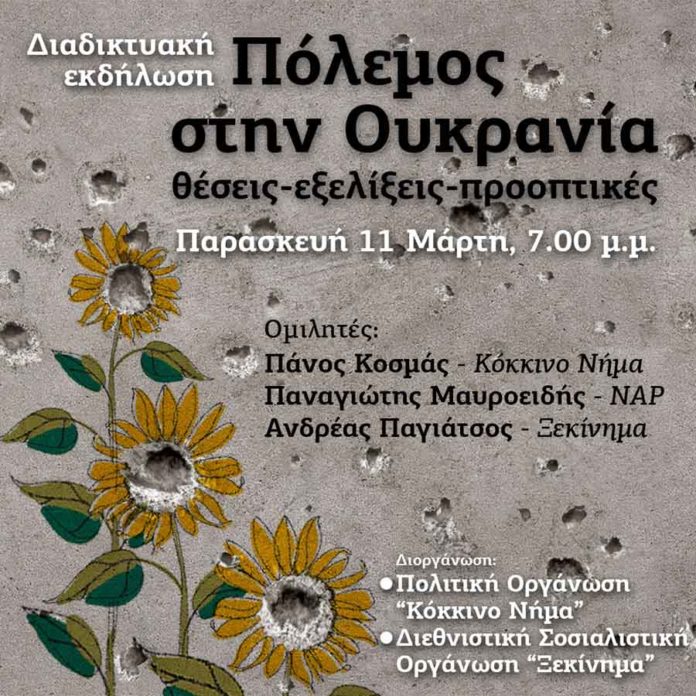 On Friday, March 11th, the political organisation Red Thread (Κόκκινο Νήμα) and the Internationalist Socialist Organisation Xekinima co-organised an online event which showed a significant level of agreement on positions about the war in Ukraine.

The title of the event was “War in Ukraine: positions-developments-perspectives”.

Red Thread took the initiative to propose this event. This was a continuation of developing relations which, over the last months, have been bringing the two organisations closer, with the  prospect of working together.

In addition to the co-organisers, the New Left Current (NAR) were invited to provide a speaker.

The event was steadily watched on Facebook live where it was streamed by about 120-130 people. When it finished the video had over 1,000 views- which means that a fairly large number watched at least part of the discussion which lasted approximately two hours.

The first speaker was Panos Kosmas, representing Red Thread. He made it clear from the beginning that this is an imperialist war, waged between two warring imperialist camps. This concerns not only the powers directly involved, but also the “Eastern camp” around Russia and its alliances with China etc (regardless of their cautious stance) on the one hand and on the other hand the “West” and NATO. The West may not have intervened by deploying military forces, but economic sanctions and the seizure of Russia’s foreign reserves is also a form of engagement.

He noted that Russia’s invasion of Ukraine is defending the Russophone populations in name only – in essence Putin’s aims are to bring the country back into Russia’s sphere of influence.

In the face of such an imperialist war, the only consistent stance of the Left is to fight to stop it. In each country this may mean different tasks – but in each case the aim is to weaken all the mechanisms that fuel the war.

In Greece this means putting the brakes on the aspirations of the Western imperialist bloc of NATO and the EU, whose interests are served by the Ukrainian government.

Panagiotis Mavroeidis, representing NAR, stressed that war is a horror and we are against its protagonists and the elements that lead to it: governments and their alliances, capital, pipelines, markets and the struggle for global hegemony.

The workers, the poor and the refugees all over the world must take their own independent anti-war, anti-imperialist stance.

One of the points he touched upon was the fact that Russia is invoking the presence of Nazis in eastern Ukraine and claiming that it is attempting to “denazify” the country.

The oppression of the Russophone people by the nationalists in Ukraine is a fact.

However, Putin’s attitude is hypocritical, for two reasons. Firstly, because his motive is not to save the people, but to establish economic influence. Secondly, because in Russia itself there is an authoritarian regime, and a number of prominent far-right leaders, such as Le Pen, Salvini, the AfD in Germany, etc. are blatantly in favour of Russia and Putin- which shows his real alliances.

He also stressed the enormous hypocrisy of the Western leaders, who present themselves as being against the war and in favour of Ukrainian refugees, when for decades NATO has been waging wars in every corner of the globe and refugees from the Middle East are drowning in the Aegean Sea because of their policies.

Finally, referring to the tasks of the Left, he said that it is necessary to recognize the right of self-determination for the Russophone populations of eastern Ukraine. When about 30% of the population of Ukraine is subjected to oppression and attacks by the official state and fascist battalions, which has led to 14,000 deaths since 2014, the only way to establish a common ground between the peoples of the area is by taking up this demand. The Left has a responsibility to openly fight for that.

Conclusions for the next period

The event was successful, not only because a considerable number of people attended it but also because those who attended it left with a very good feeling about it. It was clear from the content of all the speeches that there is a considerable degree of agreement on the analysis and the positions that the forces of the anti-capitalist/revolutionary left should take towards the war. This creates a basis to work from in the future.

This event is part of a framework of discussions and joint actions that have begun between the organisers and will continue in the coming months. Contrary to the political forces that place themselves either on the side of NATO or on the side of Russia, the revolutionary Left has absolutely no reason to choose an imperialist camp. This does not mean that it maintains a ‘neutral’ attitude. At the same time that we are fighting against the Russian regime’s attacks in Ukraine, we are fighting against our own country’s involvement in the war. We fight against the repercussions on our living standards. We stand beside all the peoples suffering from the war. The Ukrainian people, the Russophone populations who are oppressed, but also the Russian people who are also oppressed by Putin’s regime, must forge an antiwar alliance. We must promote the internationalist perspective of common struggles, both against the war and against the system that generates it.