French presidential elections: Who is the far-right Eric Zemmour? 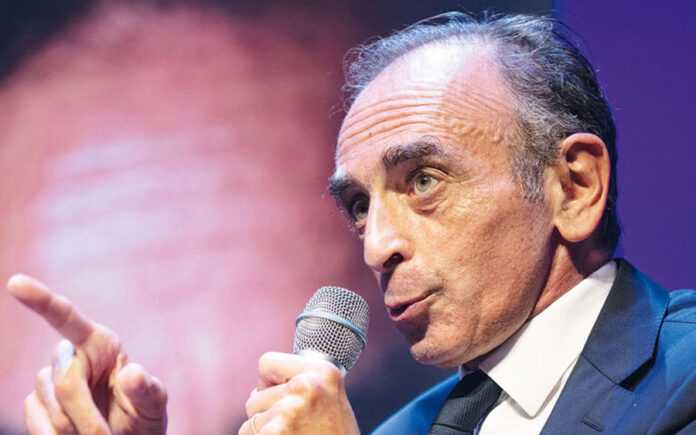 Only five months before the French presidential elections [the first round will take place on April 10th and the second on April 24th], the television anchorman and writer Eric Zemmour – even though he has no political party, having never been elected to any public office, or even officially announced his candidacy – has become the centre of the debate. Indeed, he is seen by many as the “rocket” who will challenge Emmanuel Macron, who is still so far ahead in the polls, in the crucial second round of the elections.

His rumoured candidacy first slipped into an IFOP (Institut Français d’opinion publique) poll in June 2021, immediately after the regional elections, and won the preference of 5.5% of voters. In the August Ipsos survey, 21, 7% of voters chose him even though he was still a rumoured and not an announced candidate. In September, in successive weekly Harris Interactive polls, he was steadily climbing, from 10% in the September 14th poll, to 11% on September 21st, to 13% on September 29th. On October 1st, in a new Ipsos poll, he reached 15% and was just 1% behind the traditional far-right Rassemblement National (National Rally – formerly the National Front) of Marine Le Pen.  Until then, Le Pen was the one expected to be on the second round as co-runner-up for the presidency with E. Macron.

On October 6th, there was a polling overturn which is still that way to this day. In the Harris Interactive survey for the financial magazine Challenges, E. Macron was ahead with 24% and E. Zemmour followed with 17%, moving Marine Le Pen to third place, with 15%. The same picture was reflected in two more polls, on October 13th and on November 7th, published in Le Figaro, with E. Zemmour firmly receiving 17% of the vote.

In spring 2021, one would hardly even consider that things would take this turn, and that M. Le Pen of the National Rally would be the one to challenge Macron from the right. This is the party that has ideologically and electorally dominated the French far-right for over forty years and which has twice managed to reach the second round of the presidential elections – in 2002, led by the father Jean-Marie Le Pen and in 2017, led by the daughter.

Marine Le Pen had aspired to be in the race with E. Macron, getting a second chance, in the second round of the presidential elections in April 2022.

Part of this strategy was the new tactic she has been adopting in recent years to disconnect the party from the hardline fascist past of her father. This is to convince the French ruling class and the European capitalists that the National Rally is a credible and solid governing option.

But the June regional elections marked a very hard landing for M. Le Pen. The National Rally did not win any of the 13 constituencies and M. Le Pen found herself cornered.

On the eve of the regional elections, E. Zemmour interpreted the disastrous failure as follows:

After her re-election as president at the party congress in early July, there has been an acceleration of departures of elected delegates, cadres and members.

The harsh criticism of her choices also found a place in the public sphere. The statement made in Le Monde by the former head of the Deux-Sèvres NR prefectural organisation are typical:

“The gap is getting deeper over time. We were banned from participating in the ‘Manif pour tous’ [a demo organised against same-sex marriage, abortion rights etc]. … Marine Le Pen has declared that the ‘Great Replacement’ is a conspiracy theory and that Islam is compatible with the French Constitution, that she will not withdraw from the Schengen Treaty or the European Convention for Human Rights… She is a leftist who grew up in a tower and inherited the name Le Pen.”

The way was thus paved for E. Zemmour to invade the political scene.

Since the September 2021 launch of his latest book, “France has not yet said its last word“, which looks like an electoral manifesto, E. Zemmour has been touring the country meeting potential supporters, but also protesters who denounce him as a fascist and a racist. Although he dismisses these allegations, his statements and writings tell another story.

He routinely describes France as a country under threat from “invading” Muslim immigrants who aim, ostensibly, to turn it into an Islamic state.

This is a reproduction of the “Great Replacement” theory of the far-right theorist Renaud Camus.

In the name of averting this “threat”, Zemmour has stated that if he were President, he would close the French border and deport two million immigrants during his five years in office. He would also outlaw the public use of the Muslim women’s burqa and the naming of children after Muslim names.

Outlining his vision for the country today, he promises a rebirth of the old Great France of Jeanne d’Arc, Napoleon and Charles de Gaulle.

The same over-nationalist and imperialist line runs through his ideas on the country’s foreign policy: he denounces the unequal treatment of France by American imperialism (especially after the conclusion of the AUKUS agreement); he advocates a rebalancing of the country’s relations with Putin’s Russia; he suggests the country leaves NATO and puts limits to the extreme powers of the European directorate in order to restore French sovereignty; he also expresses his sympathy for the Hungarian nationalist Prime Minister, V. Orban and the demagogue, sexist and racist American former president, D. Trump.

Consciously anti-feminist and homophobic, he advocates the reinstatement of the death penalty and the abolition of speed limits on national highways.

Although a religious Jew, he is denounced by the Jewish community for anti-Semitism. This is due to his provocative statements. Just to name a few, he has questioned the innocence of Captain Alfred Dreyfus, the Jewish army officer accused of pro-German espionage and who was eventually acquitted in 1906. He further claims that the government of nazi collaborator Philippe Petain allegedly protected French Jews during the Nazi occupation.

Battle for hegemony in the far right

E. Zemmour is emerging as the front-runner in the showdown within the far-right in the presidential race so far, at least in the polls. He has even already gained the favor of Marine Le Pen’s father, 93-year-old Jean-Marie Le Pen, who told Le Monde:

“Marine has abandoned her strongest positions and Eric has taken over her pitch… If Eric is the best-placed candidate in the nationalist camp, of course I will support him… My only difference with Eric is that he is Jewish. So it’s hard to call him a Nazi or a fascist. And that gives him more freedom.”

But this does not mean that the battle is already over.

The fuel for E. Zemmour’s “rocket” is not only obtained from the far-right tank.

He is equally trying to fish in the murky waters of the general election protest vote, given the attrition of E. Macron and the aggravating factors of the pandemic, the economic crisis and the great anger at the skyrocketing prices of gas, oil, electricity and basic food products.

As put by Jean-Yves Camus, head of the Radical Politics Observatory:

“The real problem of the average French citizen is that they reach the end of the month and the money is less and less each time… Zemmour bases his whole campaign on one issue: immigration and national identity… So he has found something to ‘speak’ to all French people. According to a recent poll, 61% believe in Zemmour’s ‘Great Replacement’.”

The situation would be quite different if the vacuum at the left of the political spectrum were not the worst and deepest in recent years.

At the same polls that E. Zemmur is sweeping, the parties that speak in the name of the left, both anti-capitalist and reformist, are literally gasping.

Nathalie Arthaud of the Trotskyist “Workers’ Struggle” (Lutte Ouvrière) is getting 0.5-1%, Philippe Poutou of the Trotskyist “New Anti-Capitalist Party” (Nouveau Parti Anticapitaliste) is also stuck at 0.5-1%, Fabien Roussel of the “Parti Communiste Français” (French Communist Party) has  not reached more than 1.5-2% and Jean-Luc Melanchon of “La France Insoumise” is at 9-10%, just half of his result in the 2017 presidential election when he got 19.58%!

Even so, an electoral cooperation under a common united front made by the above parties could possibly rock the boat. This does not mean that these anti-capitalist forces should be “watering down” their own independent radical programme. Unfortunately, however, this prospect is not to be seen on the horizon.

The timing is already ripe; after all, E. Zemmour himself only appeared on the political scene five months ago. If, on the contrary, the left forces were to concentrate each on its own electoral campaign, they would once again find themselves far behind the needs of the workers, the youth and the popular layers.

The French left, like so many left forces in different countries, need at some point to discover the simple and yet so important path of cooperation, both in the movement and the electoral levels.