Erdogan, the war in Ukraine, the greek-turkish relations and the Left in Turkey. Interview with I. Bereketli (TIP) 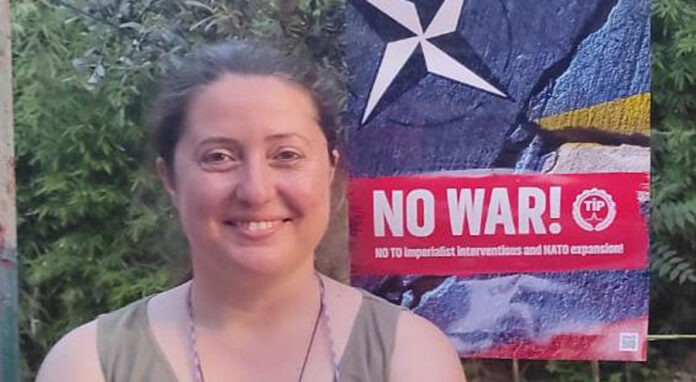 Q: The Erdogan regime seems to be trying to take an “intermediate” position on the war in Ukraine. How does this influence the internal political situation of Turkey?

A: AKP’s foreign policy had certainly failed for a long time now, especially considering the war in Syria, and they lost their credibility. Nowadays, Erdogan tries to create an advantageous international and domestic position, by playing an effective role in the war in Ukraine.

The AKP government claims to work for peace in Ukraine, to stop the bloodbath, and to guarantee stability in the region. One may easily ask, if the AKP government is so much into building peace around the world, then why did it interfere in the war in Syria, why did it back jihadists for many years? We know what they are working for, and it is only what is in their interest.

Today, taking an “intermediate” position on the war in Ukraine is in their interest to manipulate internal politics in Turkey. The country is going through a severe economic crisis, as we all feel in our bones. The situation will only deepen, as the war in Ukraine continues, since Turkey is dependent on Ukraine and Russia, especially for wheat and energy. This means that we also face a food and energy crisis. The AKP government is just trying to make this invisible, and make people turn their eyes from the catastrophic economical situation to a “bright political victory”, if they manage to succeed in negotiations between Russia and Ukraine. We know that this will not happen, and more importantly the majority of the people do not buy such tricks anymore. The Erdogan regime has significantly lost its political hegemony inside the country.

Q: After a period of relative stability, there now seems to be more tensions in the Greek-Turkish relations. What do you think the movements and the Left can do to avoid the rise of national divisions and war?

A: Increasing the tension in the Greek-Turkish relations through provocative moves has always been useful for the right wing governments in both countries. It always helped them to rally the two peoples around nationalist feelings. During the last years, we have seen the tension rising dangerously during the East-Med gas explorations issue. Now, we see the same scenario again in the Aegean sea. Lately, the military bases placed by the US army on the Greek territory around the border seem to deteriorate the previously stable situation as well.

Personally, I don’t think that there will be a major war between Greece and Turkey, as they are two NATO member countries.  However, it is possible to witness minor clashes in the Aegean that would still bring enough chaos in our region.

In order to avoid such prospects, first of all the Left should expose the true nature of those tensions and the class policies of the governments on both sides. The Left should show that provocative actions aim to serve mostly internal politics in order to trigger nationalism. Finally, the Left should organise international solidarity for peace in the region and in the world by calling international socialists and progressive forces to take action against militarism, the arms race, and war policies.

Q: What is the situation on the Left? Are there discussions to form a united front coming to elections?

A: Although the socialist, revolutionary tradition in Turkey is still strong, the current situation of the Left is quite fragmented, and far from having a big impact on the central political scene. Now using the elections as a political tool, we, as TİP, want to break the barriers built in front of the Left.

We see that Erdogan’s regime is losing its support day by day, as its end is close, and a new period in the history of the Republic of Turkey is about to start. A period of refoundation is in front of us. Therefore, the parties on the Left have to gather their forces in order to leave a socialist mark on the refoundation of the Republic.

As for the electoral camps, currently there are two big alliances formed in Turkey’s political arena. One is the AKP-MHP’s “People’s Alliance”, and the other is the “Nation Alliance”, which is formed by 6 opposition parties ranging from social democrats (Republicans-Kemalists) to islamists, from nationalists to ex-AKP figures. The people cannot see a real way-out to an equal, just and free future through those alliances, neither do we. As for the Left, socialists parties and HDP are outside of this picture. So, as parties on the left, we believe that we have to build a third choice for our people.

Since January, preparatory meetings are being held to form this third alliance for the elections, with the initiative of seven parties, including TİP and HDP. The alliance is not officially announced yet, however we already started cooperating on the streets for protests and campaigns against poverty. We expect the third alliance to raise the voice of the working class, laborers, women, students, LGBTI+ people, Kurds, Alevites, of all the oppressed people.

Q: TIP is experiencing a very fast growth in this period. What are your plans for the next period, how do you plan to build a socialist mass party?

A: TİP is growing very fast indeed. Every month we receive hundreds of applications for membership to the party. This shows that until now, we have a successful trajectory  towards the aim of becoming a massive socialist party in the country. However, we still have a long way to go to reach that goal.

Our main strategy is to make socialism a real political power in Turkey. In the years following the US-backed 1980 military coup, after which socialist militants and political leaders were imprisoned and even executed, the socialist movement in Turkey had lost the power that it had gained in the 1970s.

Today, TİP wants to make socialism once again a legitimate choice for the people. Therefore, our goal is to build a massive socialist party in the country.

TİP aims to be the leading force in the struggle against the Erdoğan regime by organising local branches in several cities and having its pioneers in the mass organisations, trade unions, and student associations, as well as its representatives in the Turkish Parliament. In Turkey, social movements (women’s struggle, ecological struggle, etc.) are rather strong. However, without a class oriented point of view and focus on seizing power, those movements cannot reach victory. Moreover, any working class struggle that doesn’t have a living contact, does not communicate and intervene in the social movements, cannot reach a large number of people. Hence, we aim to build bridges among those movements and connect them with class ties. Briefly, this is how we plan to build a massive socialist party.

Share
Facebook
Twitter
WhatsApp
Viber
Email
Previous articleAustralia: a changing scenery- interview with Kathleen Galea
Next articleThe extradition of Julian Assange by the UK is a challenge to the democratic rights of all of us