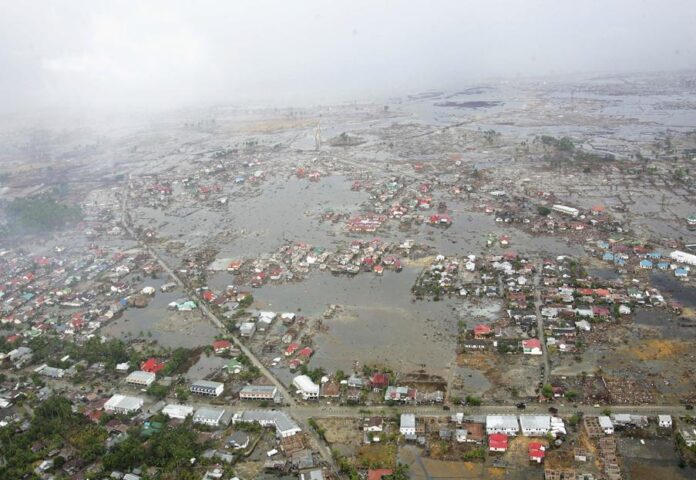 The deadliest tsunami in human history occurred on 26 December 2004. It is estimated that about 230,000 people were killed in fourteen different countries within a few hours. Apart from the countries in Southeast Asia which were at the epicenter of the disaster, the tsunami also reached the Maldives, the Seychelles and the eastern African coast, hitting Tanzania, Somalia and other countries.

On the morning of December 26, 2004, an earthquake measuring 9.1 on the Richter scale occurred, epicentered in the marine area west of the northern part of the island of Sumatra. The type of earthquake, combined with its intensity, created a gigantic tsunami which hit Indonesia within a few minutes and then Thailand and Myanmar. About two hours later, the earthquake reached Sri Lanka and India, to end up hitting the coasts of Australia towards southeast and Africa towards the west.

The earthquake that preceded the tsunami was among the world’s three largest ones since 1900. It is estimated that the amount of energy released equals 23,000 atomic bombs like the one that had flattened Hiroshima. As for the tsunami, it reached a height of twenty meters, equivalent to a six-floor building, sweeping away houses and crops, and completely erasing villages and small towns from the map. Apart from the 230,000 victims, millions of people lost their homes; an estimated 1.7 million were forced to flee their hometowns after the disaster.

Most of the victims were locals, but also a large number of tourists were killed. After all, it was the day after Christmas and the exotic beaches of countries such as Thailand, Indonesia and Sri Lanka are favorite tourist destinations for westerners and Australians. A total of 38 countries mourned victims from the deadly tsunami.

Shocked by the devastation, loss of lives and destruction of basic infrastructure, millions rushed to help. Tourists who survived the disaster devoted a lot of time and energy to raise funds and resources for the relief of the victims, after returning home and recovering. Some of them even returned back in order to help. On the other hand, beyond ordinary people who expressed their solidarity, large donations were pledged by the governments of advanced capitalist countries. It is quite usual to see governments and institutions rush to invest in “humanitarianism” in similar cases, in order to improve their public image. Yet, the role that local governments and international charity organisations played in distributing this aid is suspicious, to say the least.

Where did the aid end up?

The total amount pledged from governments, charities and individuals was estimated at approximately $6.25 billion. This amount of money is considered to be the largest and most immediate response to any humanitarian disaster in history. Nevertheless, an important part of these money never reached its destination. The US promised about $270 million in aid to Indonesia and ended up giving less than $48 million. Much smaller sums reached Sri Lanka (less than a million dollars were given by Spain, France and China, although each of them had pledged bigger amounts).

On the other hand, the aid that eventually reached the affected areas was distributed through some of the world’s largest charity Non-Governmental Organizations. In the case of the humanitarian crisis management in Indonesia’s Aceh province, which was almost flattened by the tsunami, the UN was accused but the Red Cross for failing to coordinate the efforts to distribute aid and rebuild the region. A high-ranking Red Cross official in 2005 criticised the rivalry between different NGO’s. As the Guardian reported

“In remote places … and in some cases, new charities were set up which simply showed up on the scene and tried to help,”…

Iolanda Jaquemet, an independent journalist, writing for the report from the Indonesian island of Sumatra, said: “Rivalries between agencies competing to spend unprecedented budgets did not encourage information sharing.

It is hard to imagine a clearer admission of mismanagement, let alone corruption.

Children as victims: the tsunami and trafficking

Countless children became orphans or their families lost their means of survival due to the disaster. For many of them life continued to be a tragedy even after the tsunami, as they were now the most vulnerable victims of human trafficking.

According to a Unicef report, sexual exploitation of minors, which was flourishing in many Southeast Asia countries even before the tsunami, worsened dramatically after the disaster.

According to estimations, 150,000 children lost their parents, and therefore any protection, only in Indonesia, which was the country with the highest number of victims. Approximately 20,000 lost their whole families. Procedures for adoption were time-consuming and restrictive, and this created the space for illegal “adoptions” of children, organised by trafficking networks. It is interesting to note that the Indonesian government placed armed guards in the camps of the afflicted during the first period after the disaster, in order to protect children from being kidnapped.

Southeast Asia: A paradise for inequality

The deadly tsunami dramatically aggravated people’s living conditions in many Southeast Asian countries; most of them have not yet fully recovered from the disaster, even up to this day. But these people’s lives had never been rosy. Countries like India, Sri Lanka, Myanmar, Thailand, Indonesia, having already suffered from colonialism, poverty and inequality, have been faced in recent years with neoliberal austerity policies, as well as climate change and the extreme weather conditions that occur from it.

The above picture is completed with the authoritarian regimes that rule most of the countries in the region. It is clear that this is a continent of extreme inequalities: modern technology wonders and the ultra-rich coexist with hunger, child exploitation and brutality. At the same time, however, the area is rich in powerful traditions of great national and social struggles, both against Western colonialists as well as the local authoritarian and exploitative regimes. As long as oppression and inequality continue to increase, it is only certain that they will create new social explosions.