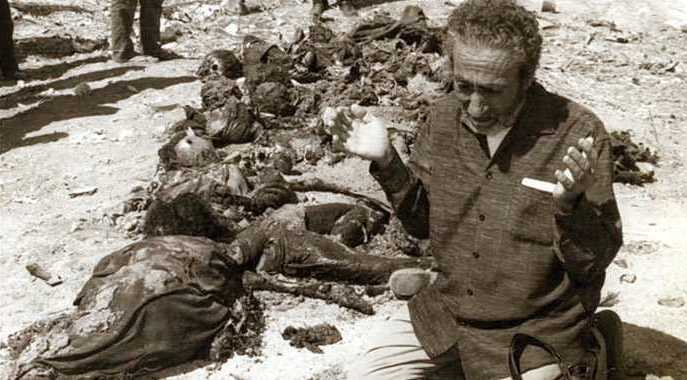 On August 14, 1974, members of EOKA B murdered dozens of Turkish Cypriot prisoners fleeing the village of Tochni. On the occasion of this anniversary, we republish an article originally posted in Xekinima.

On August 14, the Turkish Cypriots were loaded onto a bus, which headed to Limassol.

“We filled the bus. Four armed men also boarded it, one sat behind the driver, pointing his gun at us. They told us we would be taken to an army camp in Limassol.”

Greek Cypriot police officers stopped the bus at a checkpoint in Yermasoyia. When asked who the passengers were, one of the paramilitaries responded sarcastically: “tourists.”

The men were taken to Palodhia. The bus drove off the tarmacked road and stopped some 100 metres later.

They were ordered to get off and made to walk 100 metres farther.

“We were high up, it was a place like a small square with a natural wall. From there you could see thousands of tents in the distance,” he said.

They were told to sit down and have a smoke or eat something, if they had food with them.

They stood in front of them, together with the bus driver who was also armed. The Turkish Cypriots were told that they would be taken to where the tents were, which was a prison camp.

They were shown a spot where they were asked to leave any papers they had on them.

“One of the four said he was leaving to go and sort out the tents. He went down the wall and before a few minutes passed we heard a shot … and those left behind started to spray us with bullets.”

“They were firing for ten minutes, emptying their weapons and reloading,” Kafadar said. “I couldn’t see their faces. We were 45 individuals.”

Kafadar was injured and he felt cold. Something warm dripping on his face turned out to be blood from the head of a man who fell on top of him.

This is the testimony of the only man who survived the Tochni massacre in August 1974, Suat Hussein Kafadar. A man who saw his family murdered before his eyes, while he himself escaped at the last moment from the Greek Cypriot right-wing extremists, thanks to his luck, as he was seriously wounded, pretended to be dead and then escaped.

It was the morning of August 14, 1974, when two buses “requisitioned” by EOKA B men with dozens of Turkish Cypriot prisoners were leaving the village of Tochni in Larnaca province. After crossing the Geromassogeia roadblock and arriving at a location near the village of Pallodhia, the EOKA B gunmen disembarked the Turkish Cypriots and told them that they had to wait to be transferred to a prison camp. A few minutes later they started shooting, killing 87 prisoners, some of whom were 12-year-old children. On the same day, EOKA B men similarly executed 127 women and children in the villages of Alloa, Maratha and Santalaris in Famagusta province.

“I heard one say, ‘if anyone moves shoot him on the head.’”

He stayed there holding his breath, while the executioners apparently finished someone off.

Someone suggested stealing their watches but he was told to leave them and get out of there before anyone saw them.

“This means that they had no order to do this,” Kafadar said.

One of the men said they should go get an excavator to bury them.

Another Turkish Cypriot, Niazi Cavus, who was also alive suggested they left. He was never found.

Kafadar spent the night next to a tree near the execution site.

“The ants crept on me, on my wounds, I was scratching all night.”

The massacres in the four villages were operations planned and carried out by members of EOKA B, the far-right terrorist organisation that had been operating in Cyprus since 1971 under the leadership of Georgios Grivas in collaboration with officers in the Greek military force in Cyprus and the Cypriot special forces and acting as an agent of the Greek military dictatorship.

From 1971 to 1974, EOKA B engaged in a series of terrorist attacks against government targets and attempted to assassinate the elected President of Cyprus, Archbishop Makarios, whom it saw (as did the Greek Junta) as the only obstacle to the “Union” of Cyprus with Greece.

When these attempts failed, the plan for a coup against Makarios was put into operation, which finally took place on July 15, 1974.

On July 20, the Turkish army, using the coup as an excuse, as Turkey was a “guarantor power” under the Constitution of Cyprus, landed in Kyrenia.

With the beginning of the invasion, and with ordinary Greek Cypriot and Greek soldiers desperately defending themselves against the Turkish army, most of EOKA B carried out ethnic cleansing operations in the rear against dissident democrats and Turkish Cypriots.

In fact, some members of EOKA B had the audacity to boast, as one of them did to the then soldier Nikos Genias, who had retreated through Maratha, Aloa and Santalari. As he recalled, in an interview he gave to the newspaper Haravgi in 1998:

“members of EOKA B with excavators opened holes in the ground and buried the elderly and children they had killed in these villages. In fact, one of them, boasting, told us “We completed our job”

The revelation of the two massacres shocked Cypriot society, but at the same time caused waves of anger in Turkey. Hundreds of Greek Cypriot prisoners of war were brutally tortured in retaliation for the two massacres and many were executed. And this, at the same time that the EOKA-B fascists who committed these crimes were walking around freely in south Cyprus, unpunished and armed, guarding the rear for fear that the democrats would regroup and force the return of the elected government.

EOKA B continued its terrorist activities until 1978, when it was officially disbanded. In practice, however, its supporters joined the traditional party of the Cypriot right, DISY (Democratic Rally).

Suat Hussein Kafadar does not hate all Greek Cypriots, but only the murderers

Despite the hatred that every human logically feels for those who killed his family and almost killed him, Suat Hussein Kafadar explains that hatred cannot be extended to an entire people:

He said he had no hatred for Greek Cypriots, only those who perpetrated the crime.

“I don’t know them, maybe I won’t recognise them if I see them, but if someone says its them, I could, I don’t know, I could grab them from the throat.”

In recent decades, a kind of omertà has been imposed on EOKA B’s activities by Greek Cypriot governments.

In the official Greek Cypriot and Greek historiography, the role of EOKA B in the events leading to the Turkish invasion is always briefly mentioned. And while the atrocities committed by the Turkish troops during the invasion are mentioned in detail, the massacres carried out by EOKA B are never mentioned. The school, the university, the media in Greece, teach us to hate the “barbaric Turks and Turkish Cypriots”.

But it is our duty to remember the criminal actions of the Greek and Greek Cypriot far right. And it is the responsibility of the Left to remember it, because the ruling class parties will never do so. It is a necessity for the Cypriot people (Greek Cypriot and Turkish Cypriot) to fight against nationalism, and unitedly close the open accounts they have with the far right and the ruling classes that breed it.