COP27: wishful thinking but no commitments as climate crisis deepens 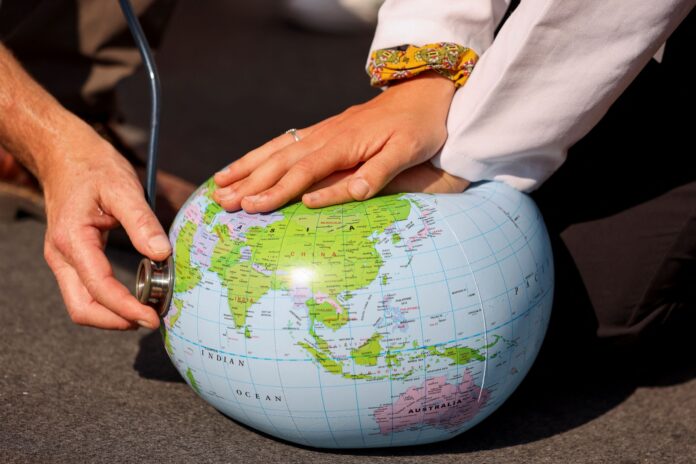 The COP27 (27th Conference of the Parties, organised by the United Nations) summit in the Egyptian Sharm el-Sheikh resort ended two days later than originally planned. A deal was struck, after an almost total collapse of negotiations. This deal is a step back even from the completely inadequate targets of the COP26 meeting in Glasgow last year, let alone the Paris Agreement of 2015. In truth, measures to tackle climate change are getting less effective every year. While the climate crisis is marching forward destroying the environment and livelihoods on its way, the leaders of global capitalism are either bogged down with their internal infighting, or do not seem to care much as long as they keep their profits. The situation resembles the music band of the Titanic that was playing while the ship was sinking.

The failure of the COP27 meeting was perhaps most vividly described in the closing speech of Alok Sharma, the COP26 president, criticizing the concluding document. He said:

“Emissions peaking before 2025, as the science tells us is necessary.
Not in this text.
Clear follow-through on the phase down of coal.
Not in this text.
A clear commitment to phase out all fossil fuels.
Not in this text.
And the energy text, weakened, in the final minutes.
Friends, I said in Glasgow that the pulse of 1.5 degrees was weak.
Unfortunately, it remains on life support.”

In fact, even this assessment is unrealistically optimistic.

The consensus now amongst scientists and analysts is that the 1,5 degrees Celsius target, while theoretically still in reach, is realistically unlikely to be achieved. As the Economist put it,

“The world is going to miss the totemic 1.5°C climate target. It needs to face up to the fact”

What the capitalists themselves are pointing to as the only “optimistic” development, is the new Loss and Damage UN fund that was agreed. Loss and Damage is qualified as the harm caused by “human-generated climate change”. Based on this notion, a case is made for the compensation of developing countries when they face natural disasters caused by the actions of the rich, industrially developed countries that are responsible for the emissions that caused these disasters.

It surely makes sense that imperialists (and not ordinary workers living in these countries) are forced to pay in order to deal with some of the catastrophes they have created. But the deal struck in COP27 over this issue, does not provide any cause for celebration by the people in the Global South.

The Loss and Damage fund is still nothing more than a mere idea. In COP27:

As is clear, there are no certainties at all about this new fund, there is only the word of world leaders that it will (maybe, sometime) come into being…

But even if this fund eventually goes through, throwing some money at a problem does not make it go away. If climate change is not addressed in time, more and more disasters will take place. These will not be mitigated by compensating the victims with a few dollars (even if these dollars ever reach their declared target). Capitalists and their corrupt government servants, time and again have shown that they understand only one thing: money. But paying hush money cannot and will not prevent the climate disaster that is approaching.

Global warming is accelerating. With every passing year, the devastating effects of climate change become more and more apparent.

This year, floods in Pakistan affected 1/3 of the country’s inhabited areas and a total of 33 million people. They killed 1,700 people and destroyed over 2 million homes. At the same time, major heat waves and droughts occurred. In Niger, the heatwave destroyed 40% of the cereal crop, leaving 2.6 million people literally facing starvation. In Somalia, the drought forced 1 million people to flee their homes in order to survive. In China, the US and Western Europe, the drought has affected electricity generation, crops and biodiversity. In those cases, it did not, however, cause the humanitarian crises that we saw in a number of ‘developing’ countries.

The COP international climate conferences have been held annually since 1995, but no substantial measures have been taken to halt global warming and climate change.

At COP26, held in Glasgow in 2021, plans were made and targets were supposedly set to avoid a temperature rise of more than 1.5 degrees Celsius above pre-industrial levels. Other “commitments” included an attempt to stop deforestation by 2030, and a plan for the more developed countries to provide financial assistance to developing countries to phase out ‘dirty’ energy sources. COP26 also set the target that by 2050, greenhouse gas emissions should reach ‘Net Zero’, meaning that through a process of ‘decarbonisation’ and ‘carbon offsetting’, human-generated greenhouse gases will be ‘neutralised’.

Although the COP26 targets seem ambitious on the surface, in fact they were and are far below what is actually needed. A typical example is the net zero emissions target, at a time when what we should be planning is to make greenhouse gas emissions negative. Similarly, the objective of halting deforestation should not be set for 2030, but should be implemented immediately and complemented by plans and targets for massive reforestations.

What is worse however, and typical of the representatives of capital, is that the governments participating in COP26 had no intention anyway of honouring the agreements they signed last year. COP26, for example, set the target to reduce methane pollutants by 30% by 2030. However, in 2021, methane levels continued the upward trend of the last two years and actually had the largest recorded increase according to the National Oceanic and Atmospheric Administration. Today, methane in the atmosphere is 162% higher compared to the pre-industrial era. Similarly, in 2022, instead of a decrease we had a 1% increase in carbon dioxide emissions.

False promises were not only a phenomenon of COP26 but also of previous international climate change conferences. Industrially developed countries had pledged to provide $100 billion per year from 2020 onwards as aid to developing countries. Only a small fraction of this money was actually provided.

Governments often make pro-environmental promises to increase their support and popularity. Promises that they know they will not keep. US President Joe Biden promised in 2021 $11.4 billion in annual funds to fight climate change internationally by 2024. To start with, this pledge was grossly inadequate. The Overseas Development Institute estimates that the US should allocate $45-50 billion annually to cover the environmental damage it is causing. However, already in the first year, even this inadequate promise was not been kept: the US Congress has only approved USD 1 billion for 2022.

The war in Ukraine and the new shift to coal

The war in Ukraine has triggered a reshaping of the global energy market. The price of fossil fuels, already on the rise before the war, soared after March 2022. This gave oil and gas multinationals an incentive to invest in new extractions. In the US, the Biden administration is again allowing domestic oil and gas drilling. So do the governments of the Mediterranean countries, Africa and so on.

All over the world, the use of fossil fuels is expanding instead of being phased out. At the same time, we have a return to the ‘dirtier’ forms of hydrocarbons, coal and lignite, which are cheaper, but emit far more greenhouse gases. Coal and lignite account for 40% of global carbon dioxide emissions.

At COP26, a decision was taken to immediately limit coal and lignite in particular. A few months later, the European countries that had been pushing for the abolition of these fossil fuels reopened coal mines and electric power stations that coal and lignite as fuel.

According to Bloomberg, in 2022, coal and lignite use will reach historic highs and is expected to remain at those levels for several years.

Capitalist greed is killing the planet

At the COP27 summit, which began on November 6 and concluded on November 20, developed country governments once again made speeches about how critical the situation we are faced with is. They stressed once again the need to take action against climate change. But when it came to making the measures concrete, their hypocrisy was revealed. Again.

According to environmental scientists, our current trajectory is leading to a 2.8 degrees Celsius rise in temperature at the end of the century. The promises made and the agreements signed to date, if implemented, could reduce the rise in temperature to 2.5 degrees.

This is a huge difference from the target set at the international climate conference in Paris in 2015, of no more than 1.5 degrees above pre-industrial levels. Today, we are currently at about 1.2 degrees warmer than in the pre-industrial era. Just imagine the disasters we are about to face in a world that is up to 2 Celsius degrees warmer.

The greed of big businesses around the world and of the governments that support them, is beyond imagination. They are condemning hundreds of millions of people to death, starvation and migration and are driving thousands of species of animals and plants to extinction in order not to be deprived of their profits from fossil fuels, deforestation and all their environmentally destructive practices.

Overthrowing this system has never been more necessary and timelier.