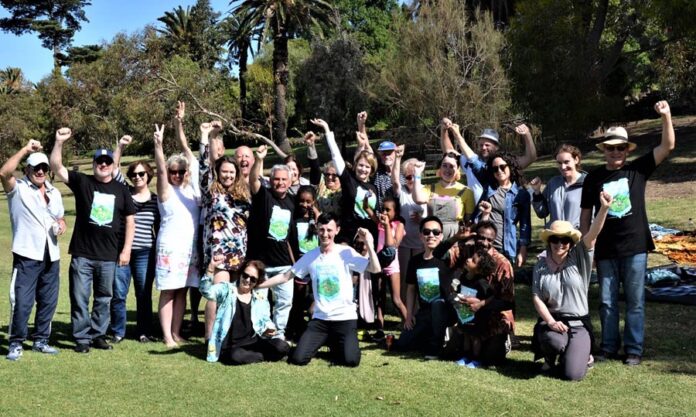 After a 6-month campaign, Footscray Park in Melbourne’s inner-west has been saved from private development! The local community forced Maribyrnong council to back down from a plan to hand over the western lawn of the park to the Melbourne Victory football club.

This was essentially a plan to privatise a huge part of the park. Much-needed open space would have been practically given to Melbourne Victory so that they could build an elite soccer academy.

Most residents agree with the need for more sports facilities in the area but said that this should not be at the expense of local parks. We refused to let the council and Melbourne Victory make this into a fight between sports fans and supporters of open space.

Melbourne Victory could have easily purchased private land in the area to build their academy, but they instead hoped to get public land, almost for free, on a peppercorn lease. This was in addition to receiving a $10 million grant for the academy from the state government.

This Maribyrnong council – dominated by Labor and the Greens – was at odds with the community from the start. They quietly supported this project and were engaged in secret talks with Melbourne Victory for years. They set up a dodgy consultation process to try and push their plans through.

There was widespread opposition to the council’s plans, with nearly 6,000 people signing an online petition. As the collusion between the council and Melbourne Victory became clearer, more and more people got involved with the Save Footscray Park campaign.

Members of Socialist Action who live in the area helped to build the campaign. At the beginning we pushed for regular organising meetings so that we could democratically discuss how to take the campaign forward.

From these meetings, outreach efforts were organised which helped build up momentum and pressure on the council. Regular street stalls were set up, while posters and leaflets helped get our message out to thousands of people. Hundreds were mobilised at a series of protests against the council.

Socialist Action members also introduced the idea of a ‘pledge’, where people could register their intention to participate in direct action to stop the development if the council refused to back down.

We realised that the campaign had already won the political argument and that we had widespread, but latent, support. The pledge was designed to turn that passive support into activity. By November, more than 500 people had signed the pledge. Undoubtedly this made it clear that the community would stop at nothing to protect our park.

The active and democratically organised campaign was the key tool in this struggle, but the threat of escalation via direct action was its sharp edge.

Direct action has successfully stopped many inappropriate developments in the past. A recent example was the community campaign against the East-West toll road. Socialist Action members played a leading role in this campaign and we brought many of the lessons to the fight to save Footscray Park.

This victory should give people the confidence to stop similar inappropriate developments and privatisation plans. When we are organised and fight back, we can win!

Socialist Action is proud to have contributed both our resources and ideas to this campaign. Along with many others, we have helped to protect an important public asset. But while this victory should be celebrated, we should note that in many ways it’s only temporary.

Big businesses and corporatized sports clubs are constantly looking to get their hands on valuable land for development. They, along with the parties they bankroll, care about nothing except profits.

As long as the profit-driven system remains we are going to have fight these people whenever they put the community’s interests at risk. The only way to put an end to this struggle is to put an end to the capitalist system that underpins it.

The alternative to capitalism is democratic socialism, a system that is based on the people’s needs rather than profits for a few.