Brazil: 7th PSOL Congress. Two projects in dispute. Great challenges for the left opposition and the candidature of Glauber Braga 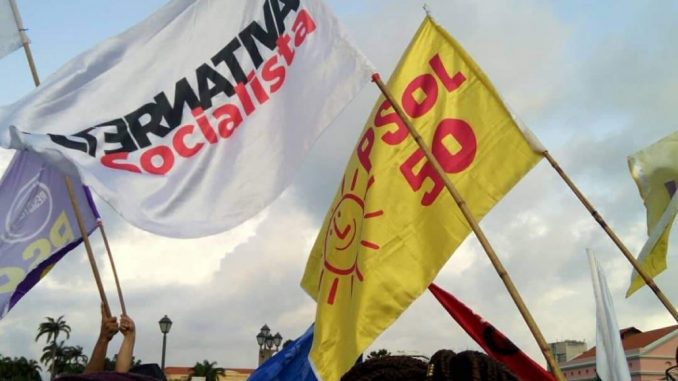 The weekend of September 25 and 26, the seventh National Congress of the Socialism and Freedom Party (PSOL) was held. From Alternativa Socialista, together with the organizations that we built the Radical Left Movement with, and other internal currents of the party with which we formed the list of opposition to the current leadership, we fought a tough battle in defense of the founding project of a party with class independence and a socialist program. The result of 228 votes (57%) for the list “PSOL of all struggles” and 173 votes (43%) for the “Left Opposition” indicates that there are two projects in dispute and that we are entering a fundamental period that will go on to define the strategic future of the PSOL.

From the outset, the current party leadership expressed its political will to advance in a project of “re-founding” the party, assimilating a bureaucratic construction method that favors top-level agreements and turns its back on the rank and file. At that time, the entire opposition came out unified to fight against the holding of a congress in the midst of the pandemic (read the Manifesto https://lis-isl.org/en/2021/03/28/brasil-psol-en-debate-lanzamos-el-manifiesto-por-un-congreso-del-psol-democratico-con-vacunacion-amplia-y-en-condiciones-sanitarias-adecuadas/), and we warned that it was an attack on democracy internal, excluding large sectors that would not have the material conditions to participate online, which would cause a concentration of decision-making power in a few hands and a setback in collective political elaboration. Unfortunately, all this was confirmed in practice and the entire congressional process (with its municipal, state and national instances) was emptied of content and expressed a formality to guarantee an attack on party democracy.

As we expressed it at that time, “The current majority leadership, which has important figures like the last presidential candidate Guilherme Boulos, the mayor of Belém do Pará, Edmilson Rodrigues, among other deputies, has insisted on the policy of what they call “re-founding of the PSOL.” This re-foundation means turning the program 180º to transform it into one that expresses the conciliation of classes and the conformation of Broad Fronts as a strategy.” [I]

The 7th Congress was unanimous regarding the need to build and strengthen the broadest unity of action against the Bolsonaro e Mourão government, the main battle that the whole of the working class and the poor people of Brazil have before them. But that important agreement was not carried over to the strategic definition of building a political alternative to the murderous government of Bolsonaro and the war project against the people of the bourgeoisie and its parties.

On the one hand, the “PSOL of all struggles” bloc, majority in the new National Directory, represented by Boulos, Edmilson Rodrigues, Juliano Medeiros and Valerio Arcary among others, ratifies the will of the PSOL to be the last wagon in the Broad Front headed by Lula-PT, the old class conciliation project. Marcelo Freixo, the most enthusiastic of that policy, when he was still part of PSOL, advocated a front even with reactionary parties. Fortunately, this project had no place in the PSOL, which forced him to join the bourgeois Brazilian Socialist Party.

On the other hand, the Left Opposition which formed the MER together with currents such as the MES, Fortalecer, APS and Comuna, among others, even with differences, united against the majority policy of throwing class politics in the trash and forming a front with bourgeois sectors disguised as “progressives.” Our struggle continues, synthesized in the defense of our own candidacy for the next national elections, seeking to build the true front of the class based left. The result is the pre-candidacy of comrade Glauber Braga for the presidency and, even with the result of the Congress, we will continue to defend it at the PSOL Electoral Conference next year, because we believe that this policy represents part, and not all, of the need of the exploited and oppressed majorities to build an alternative, independent and socialist pole.

Parliamentary party or party of struggle

The PSOL is a space of confluence of diverse political currents with their traditions. From its foundation to today, the party has been advancing in a process of assimilation to the parliamentary logic typical of bourgeois institutions. In addition to the diffuse strategy existing in the party, part of this problem is found in the fragile organic relations that some elected figures have with the party base, resulting in a complete distancing from the founding program of the PSOL. Marcelo Freixo, now in the PSB, Randolfe Rodrigues, in REDE, and Clécio Luís are some of the various examples.

This is an important point in the debate. Socialists defend that participation in the bourgeois parliament must be at the service of the struggles of the working class and the oppressed, opposed to the adherence and accommodation to the institutions, where there is no convergence with the labor movement that guarantees its mediated voice to through the mandates. This point refers to the class composition of the organization and has strategic consequences, as we are seeing in the current course of adherence to the class conciliation project.

The majority leadership won the Presidency with Juliano Medeiros (Socialist Spring), while the opposition maintains the Treasury with Mariana Riscali (MES). The “PSOL of all struggles” bloc is made up of the “PSOL Popular” camp – Socialist Spring, Solidarity Revolution (Boulos) – and the “Semente” camp – Resistance (PSTU split), Insurgency, Subverta (2 of the 3 official sections of the Unified Secretariat-IV International in Brazil). In the emptied online debates of the Congress the currents of this bloc, especially those of reference in Trotskyism that are organized in the “Semente” field, frequently defended Lula’s candidacy for next year at all costs, even knowing that this it means the defense of the Broad Front.

Resistance, in full adaptation to the pressures of Lula-PT, gained prominence with the fiery articles of its leader Valerio Arcary, creating a fantasy in which Lula’s candidacy could be opposed to bourgeois interests. We do not doubt that Lula’s candidacy is the only one, at this time, capable of electorally defeating Bolsonaro, but apparently, Resistance has given rise to another Lula who, enlightened by the advice of this current, will find redemption and lead a left front. However, the real Lula we know is the same conciliator of classes. All this politics has absolutely no relation to Trotskyism and is even part of the explanation for the erroneous policy of the Semente camp, which, while maintaining differences with the PSOL Popular camp, sustains this most regressive sector of the party as the majority.

The PSOL closes its 7th National Congress with a clear and open dispute, and the period that it opens will be marked by this. From the field of the “Left Opposition” we have achieved an important advance and we consider that our performance in the congress has a positive assessment because it avoided the hegemony of the “re-founding” project. Even with differences, the moment demands that unity be strengthened for urgent problems: the struggle for Bolsonaro Out, demanding and denouncing the betrayals of the left of regime; the correct dispute for the party´s own candidacy with comrade Glauber Braga; taking a concrete step in the construction of an independent and socialist pole. For our part, from Socialist Alternative, the Brazilian section of the International Socialist League, in the MER, we will militate with all our forces in the defense of an independent and anti-capitalist PSOL on the path of building the party of the working class with a feminist, dissident, anti-racist, anti-colonial, eco-socialist and internationalist program. We invite you to join us, join this struggle, and rebel against this system of oppression, exploitation and violence!