Artificial Intelligence exists on the back of hard-working humans 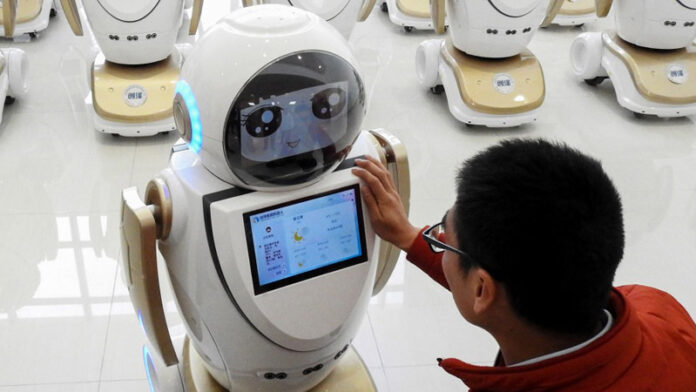 During the last decade, Big Tech companies have, in unison, relied on Artificial Intelligence (AI) for a big part of their operation. This has allowed for increased communication between humans and machines and between machines themselves. It has simplified purchasing things and receiving meals without the need for human participation. It has powered the construction of self-driving cars etc. These are all technological achievements that could, theoretically, increase the quality of life for people across the globe. Yet, capitalism, once again, is standing in the way of these benefits being materialised for the mass of the world population.

These automated systems are, however, unable to complete the entirety of their functions on their own. Instead, they are heavily dependent on human labour that works behind the scenes, for the machines and, more importantly, the Big Tech companies that own them.

Crowdworking platforms, and the companies they are linked to, are exploiting workers who are classified as ‘self-employed’ and therefore, do not receive a regular salary. In essence, these companies view the new type of ‘ghost-workforce’ as dispensable and get away with asking them to work for pennies.

Crowdworking is based on the idea and practice of crowdsourcing.

‘Crowdsourcing allows companies to farm out work to people anywhere in the country or around the world; as a result, crowdsourcing lets businesses tap into a vast array of skills and expertise without incurring the normal overhead costs of in-house employees.’ (Investopedia)

Crowdworking digital platforms, which work with Big Tech companies, advertise these types of jobs to those who sign up on them.

These are mainly odd jobs, such as producing website content, inputting data or even content moderation (for example, locating and deleting content that contains pornographic or violent references before it is uploaded on social media) and entail service provision which ultimately leads to machine learning development with the sole aim of improving artificial intelligence.

Most people living in conditions that provide constant power supply and internet access, who also have some basic computer knowledge can enrol in one of these crowdworking digital platforms and take on multiple odd jobs. The work they do is compensated at a fixed rate, bypassing the ability for negotiation between employer and employee. These odd jobs are not paid by the hour but rather paid per ‘task’ or piece of work.

Companies such as Amazon, Google, Microsoft, Uber etc function smoothly due to the hard labour carried out by these workers, who earn extremely low wages and are employed with no set contracts or any form of benefits.

According to labour laws in the USA, workers that acquire jobs from such platforms are classified as ‘self-employed’ which basically means that they are not protected by employment laws, that otherwise guarantee minimal wage and social welfare benefits.

Those who find jobs through these platforms are considered ghost-workers, due to the fact that the companies they work for do not recognise their contribution as valuable whereas consumers are rarely aware that behind the ‘magical world’ of technology you would find an entire army of badly paid labour.

The company that was first to initiate this type of labour is, unsurprisingly, Amazon. In 2005, Amazon created the platform Amazon Mechanical Turk via which potential workers could take on specific tasks and provide these necessary services.

Detailed information on the number of people employed via these platforms is lacking due to the fact that this type of work is relatively new and its workers are dispersed all over the globe. However, according to a report published in 2015 by the Pew Research Centre, it is estimated that such platforms employ about 20 million workers. Undoubtedly, this number has since then exponentially increased.

This type of work is advertised by the Big Tech companies involved as a quick and easy way to earn money whilst on a flexible working schedule, while they also claim that it contributes to the reduction of unemployment.

How much do these workers earn?

In the USA, Amazon Mechanical Turk employees earn, on average, about 2 dollars per hour, whereas only 4% of them earn more than the lower wage cut-off, which is currently at 7.25 dollars per hour (of note, some states have achieved increasing minimum wage to 15 dollars per hour).

Silicon Valley claims that this type of work has multiple benefits for society. However, a study conducted by the UN International Labour Organisation (ILO) reported that workers in these platforms are severely underpaid. This is especially true when taking into consideration the necessary -unpaid- time spent finding work, completing work-specific training etc.

These crowdworking platforms have been designed in a manner that gives employers all of the power to determine compensation for each task. Thus, it enables them to find the cheapest possible labour, whilst viewing workers as readily dispensable. This has been clearly stated by Lukas Biewald, the founder of the platform Figure Eight, himself:

‘Before the Internet, it would be really difficult to find someone, sit them down for 10 min, and get them to work for you, and then fire them after those ten minutes. But with technology you can actually find them, pay them the tiny amount of money, and then get rid of them after you don’t need them anymore.’

All of this has serious consequences for workers’ mental health.

Ghost-workers who are asked to ‘train’ artificial intelligence, have to deal with more than one ‘dark’ aspect that defines this type of work.

Undoubtedly, moderation of such content is necessary in order to eliminate harmful material to be spread uncontrollably on social media. However, the workers that are responsible for this internet ‘cleansing’ are rarely acknowledged during discussions on internet safety, whereas the majority of society believes that this moderation is performed by an algorithm rather than a fellow human being.

As a matter of fact, workers are asked to sign a contract prohibiting them from disclosing the nature of the work they carry out or give details about their employer.

The fact that these workers are unable to share details about the nature of their work, in addition to being exposed to extremely harsh images on a daily basis, has led a large number of them to feel isolated and anxious, whilst many are experiencing post-traumatic stress symptoms.

However, the companies that employ them are not taking steps to offer any type of mental health support.

It’s not an algorithm, they are human beings

The fact that ghost-work need not comply to official labour laws has given capitalists the ability to increase their wealth on the backs of these workers.

Big Tech companies are using crowdworking platforms to train artificial intelligence, offering the people that carry out this work a fraction of the wages they would otherwise have to offer if they where to hire full time employees.

Despite the fact online platform work does not offer workers any type of common ground in terms of working space or working hours, there have been efforts to unionise in the past.

In 2014, Amazon Mechanical Turk workers came together to formulate an official letter addressed to Jeff Bezos and asked him to stop selling them off as cheap labour.

Their effort was not fruitful in that instance. However, no mass movement, even if it fails, is without importance.

One very important moment in the history of labour movements in the USA occurred recently (end of March) when 8,500 Amazon employees from New York’s Staten Island were victorious in forming a union, despite the vicious kick-back from Amazon boss Jeff Bezos.

Unified workers’ action and the construction of democratic unions is the only way to safeguard workers’ rights and put an end to corporate greed. It is clear, that a large number of workers in the USA are saying ‘enough is enough’ and are preparing for the battles ahead.